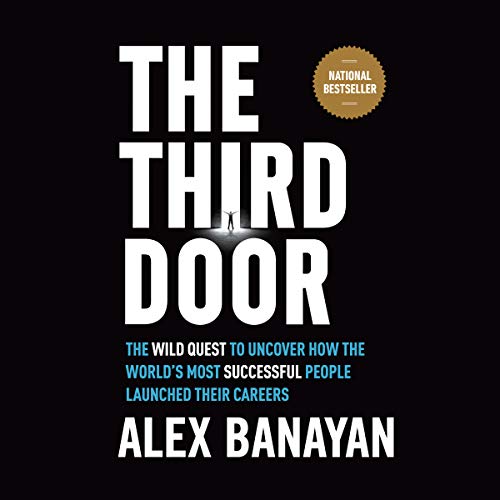 The larger-than-life journey of an 18-year-old college freshman who set out from his dorm room to track down Bill Gates, Lady Gaga, and dozens more of the world’s most successful people to uncover how they broke through and launched their careers.

The Third Door takes listeners on an unprecedented adventure - from hacking Warren Buffett’s shareholders meeting to chasing Larry King through a grocery store to celebrating in a nightclub with Lady Gaga - as Alex Banayan travels from icon to icon, decoding their success. After remarkable one-on-one interviews with Bill Gates, Maya Angelou, Steve Wozniak, Jane Goodall, Larry King, Jessica Alba, Pitbull, Tim Ferriss, Quincy Jones, and many more, Alex discovered the one key they have in common: they all took the Third Door.

Life, business, success...it’s just like a nightclub. There are always three ways in. There’s the First Door: the main entrance, where 99 percent of people wait in line, hoping to get in. The Second Door: the VIP entrance, where the billionaires and celebrities slip through. But what no one tells you is that there is always, always… the Third Door. It’s the entrance where you have to jump out of line, run down the alley, bang on the door 100 times, climb over the dumpster, crack open the window, sneak through the kitchen - there’s always a way in. Whether it’s how Bill Gates sold his first piece of software or how Steven Spielberg became the youngest studio director in Hollywood history, they all took the Third Door.

“Exhilarating and empowering... If you care about your success, you have to read The Third Door.” (Tony Robbins, entrepreneur, New York Times best-selling author, philanthropist, and the nation’s number one life and business strategist)

“From redefining success with Steve Wozniak to staring death in the eyes with Jessica Alba, this book is packed with adventure, drama, and remarkable lessons the whole way through. Whether you‘re an executive or a recent college graduate, you’ll find inspiration and wisdom in The Third Door.” (Arianna Huffington, founder of The Huffington Post and New York Times best-selling author of Thrive)

"The Third Door is at once a spirited coming-of-age story and a hard-headed examination of what it takes to succeed at the highest levels. Alex Banayan has cracked the code of the world’s most successful people and shown he will soon join their ranks.” (Daniel H. Pink, New York Times best-selling author of When, Drive, and A Whole New Mind)

This story saved my future...

I’m a 23 years old female studying advertising design, dying inside for not feeling like I was fulfilling my purpose or any of my dreams. As I came through this book (by a very random way) I started listening to it non stop... To make the long story short, I finally found what I’ve been looking for throughout all these years: a savior to my future. But not a person specifically, instead, a life long experience’s story kind of savior... It showed me that life is better when you always enter by “the third door”, and that possibilities are those that you make yourself.

Thank you Alex for being brave enough to take on this journey. I’m forever grateful.

Memoirs of a 19 year old

He wanted to write a book, so he tells us his journey and what it took.
The stories of successful people are buried and seem like an afterthought in spite of what the title suggests.

A must listen for every millennial

This book is a must read for any and all millennials. The story and lessons covered in this book are AMAZING. As an aspiring entrepreneur this book has inspired me beyond belief to accomplish this life. The fact that the author narrated this book, I believe, made it even more impactful as you get the true emotion and makes feel like you are on the journey right along side him.

The acknowledgment section became very real and emotional for me as I thought of my late grandfather and my still living father. The lessons learned about relationships and true friendships brought me to tears. This is a book that I will share with my children as they get older and live life.

Thank you, Mr. Banayan for your sacrifice and inspiration. Thank you for creating and sharing this masterpiece with the world.

Should have read a few more reviews

Overly dynamic, unnecessary yelling and fabricated excitement. Tried to tough it out the the 2nd chapter and just had to stop.

What a great book this was to listen to on my commutes to and from work. While I do not typically choose books of this nature, I was drawn to download The Third Door after hearing Alex on The Rich Roll podcast; and, I am so glad I did!

The story had me crying and laughing along and each chapter only seemed to get better than the last, which is impressive considering who all was interviewed along his journey. I can’t recommend it enough and hope you will gain as much from it as I have!

Never gets to the point

Too long with unimportant details about how he tried to get interviews with people. Where are the ACTUAL interviews with all these people? That is what i bought this book for.

I was expecting it to be more informative just like how Alex was marketing it. If you were expecting to get detailed insights and learnings from the people he interviews. This isn't it, this is more of a story about how he went about interviewing these famous people and only dispensing 1 or 2 learnings from that. I wish this included more information and details about the said interviews. But never the less this was a great story.

The books is enjoyable. And inspiring. and All. I experience some emotions I don't want to say but they were felt so deeply. I will cherish this book and remembered all my life. thank you very much.

A must read (listen)!

I bought this book after hearing Alex Banayan on The Rich Roll Podcast. Even though I’m about the farthest you can get from the demographic this book was originally intended (a 42 year old mom and wife content in her career and life) I was so drawn in by Alex’s storytelling and experience I wanted to hear more. I’m SO glad I did! Beautifully read by the author, Alex Banayan, The Third Door is engaging from the start. I bought the book in the morning and listened to every minute until it was finished, I couldn’t put it down. A combination of amazing storytelling, beautiful reflection, and the power of possibility, this book is full of entertainment and insight no matter your career, passion, or place in life. It’s infused with what’s possible when we believe in that which moves us and take action towards our mission with knowledge, failure, growth and purpose. But for me the greatest take away is the power within us all to help and connect to one another, to be door openers and window finders, to move and be moved towards our own mission and in service of others. I loved this book and cannot recommend it enough.

Mildly entertaining stories of young guy trying and sometimes succeeding in interviewing successful people on the secrets to success. However he never really learns much more about those secrets than you could learn from a self help pamphlet. I guess now he’ll go around doing motivational talks and maybe write some self help books.

Most inspiring audio book of 2018

This is probably the most inspiring book about chasing a dream and not giving up that I have come across so far. I finished it in a few days and wished it would have been longer. if you are looking for inspiration or hope that change is possible, this might be for you.

I came because of the excerpt but the rest of the book is not really worth it. Personal opinion of course.

Very inspiring book that gives you enthusiasm and energy, really interesting journey told in an entertaining way. My full recommendation.

There are many books out there on productivity motivation and the quest for success. Alex Banayan has gone on the quest to answer just these questions, but taking a very different route, than any other books I have read so far. This is not just an entertaining, but a must read!

possibilities are always close but different.

great story. great message. It's all about possibilities and choices. Believing the choices exist makes us seeing them and growing by trying till it works OUR WAY.

Best book this year! Must listen!

Amazing book! Love that Alex read it himself
Such an authentic & inspiring person! Get it for yourself & gift it to 5 friends!

This is one of those books that tell you everything you already know, but you still feel like it's teaching you something new. It's absolutely thrilling and exciting to read/listen and I can't recommend it enough. it's like a life's lesson.