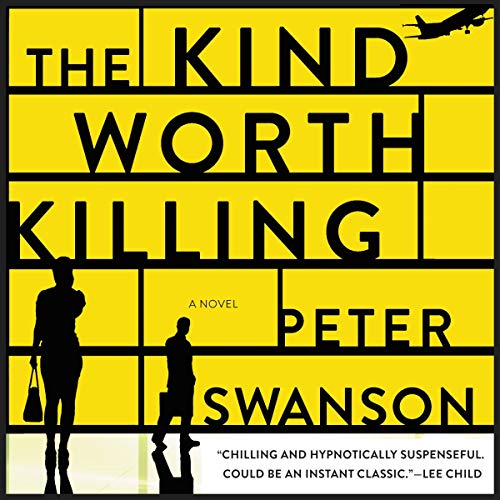 The Kind Worth Killing

A devious tale of psychological suspense so irresistible that it prompts Entertainment Weekly to ask, “Is The Kind Worth Killing the next Gone Girl?”

From one of the hottest new thriller writers, Peter Swanson, a name you may not know yet (but soon will), this is his breakout novel in the best-selling tradition of Paula Hawkins’ The Girl on the Train - now a major movie directed by Agnieszka Holland.

In a tantalizing set-up reminiscent of Patricia Highsmith’s classic Strangers on a Train.... On a night flight from London to Boston, Ted Severson meets the stunning and mysterious Lily Kintner. Sharing one too many martinis, the strangers begin to play a game of truth, revealing very intimate details about themselves. Ted talks about his marriage that’s going stale and his wife, Miranda, who he’s sure is cheating on him. Ted and his wife were a mismatch from the start - he the rich businessman, she the artistic free spirit - a contrast that once inflamed their passion but has now become a cliché.

But their game turns a little darker when Ted jokes that he could kill Miranda for what she’s done. Lily, without missing a beat, says calmly, “I’d like to help.” After all, some people are the kind worth killing, like a lying, stinking, cheating spouse....

Back in Boston, Ted and Lily’s twisted bond grows stronger as they begin to plot Miranda's demise. But there are a few things about Lily’s past that she hasn’t shared with Ted, namely her experience in the art and craft of murder, a journey that began in her very precocious youth.

Suddenly these co-conspirators are embroiled in a chilling game of cat and mouse, one they both cannot survive...with a shrewd and very determined detective on their tail.

I loved the book as I was reading it, carefully following the twists and turns until the last 5 minutes. Then I had to listen again, because I surely missed something. Nope, the ending was not satisfying at all. It’s as if the author just couldn’t make that final turn so he left it up in the air, a cliffhanger. Ugh!!

Great story but had a tough time with the male voice

The story was pretty gripping. It had me hooked from the beginning. But the man who voiced “Ted” sounded like Bob Newhart and I couldn’t get that image out of my head.

I loved it. Dark and wonderful! Worthy of a credit. I could do without the 15 word minimum for reviews who has time for that. :)

Loved it from beginning to end. Cleverly written and I'll be looking at other books from this author!

I read this in 2 days only because I had to sleep. Really hard to put down. I really enjoyed this book!

Not a huge fan of twists for the sake of twists

I don't think it's a bad book, I just didn't like it. A lot of reviews praise this book for its twists, but I really don't see what's challenging about giving your reader a plot point they didn't expect.

Personally, I didn't feel worried about any of the characters. In fact, the twists were so important to the author that everyone in this book had to be 100% self-assured until the last second in order to hide that 'something' was going to happen.

Since none of the characters ever felt afraid, I couldn't connect emotionally, and the twists fell flat. I t was like an episode of Lost, where they just want you back for thw next episode. I want a strong, basic foundation, and a twist is the icing on the cake.

This book was recommended by a friend who always hits a home run! Very good, and kept me in suspense!

Juicy thriller that keeps you reading and guessing!

I love a good mystery and thriller and especially one that doesn’t have far fetched story lines and characters. This book fit the bill! It was full of well written and developed characters who you wanted to like even though they were commuting crimes. And the characters I didn’t like were still well written. The story was exciting and kept me guessing. It had twists but not ones that didn’t make sense with the story. Although I feel the back and forth between perspectives is overdone lately, especially with thrillers, this author did it correctly. There was a bit of gratuitous sex and language - some fitting for the characters but most not at all necessary- otherwise the book was well written. And I thought the ending was perfect! Not sure what some people read or if they just didn’t get it, but it wraps it all up nicely. Definitely a must listen or read! I didn’t care for the narrator that voiced Miranda- she sounded breathy and like she was trying to hard to be sexy but wasn’t. Maybe it was also because I didn’t like her character. She had no redeeming value. The other narrators were great!! Especially Lily! Loved her character and the back story on her. Like I said most of them are doing bad things, you still root for Lily. Especially when she is a child. And Ted too. I liked how he was faced with such internal conflict - it was definitely relatable. Ok stop reading this and go listen to the book!

What a great ride! I could not stop listening to this one. If you like psychological thrillers, this will not disappoint!

This would have been a great story except for the ending. it was just sort of left hanging. You could just make up your own ending. I didn’t like that at all. I like a good ending. The ending should have been better pulled together.