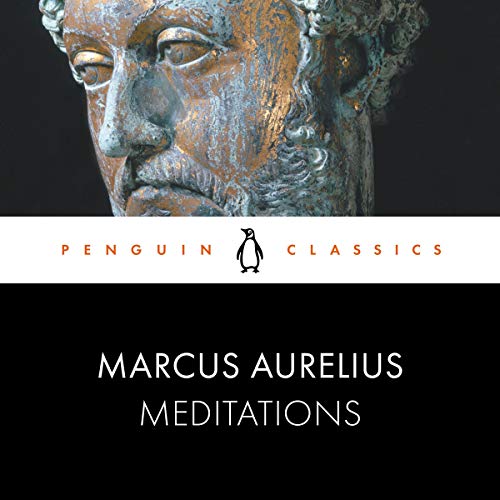 This Penguin Classic is performed by Richard Armitage, star of Peter Jackson'sThe Hobbit trilogy and also known for his roles in Ocean's 8 and Spooks. This definitive recording is translated with notes by Martin Hammond and an introduction by Diskin Clay. Originally written only for his personal consumption, Marcus Aurelius's Meditations has become a key text in the understanding of Roman Stoic philosophy.

Written in Greek by an intellectual Roman emperor without any intention of publication, the Meditations of Marcus Aurelius offer a wide range of fascinating spiritual reflections and exercises developed as the leader struggled to understand himself and make sense of the universe. Spanning from doubt and despair to conviction and exaltation, they cover such diverse topics as the question of virtue, human rationality, the nature of the gods and Aurelius's own emotions. But while the Meditations were composed to provide personal consolation, in developing his beliefs Marcus also created one of the greatest of all works of philosophy: a series of wise and practical aphorisms that have been consulted and admired by statesmen, thinkers and ordinary readers for almost two thousand years.

Martin Hammond's new translation fully expresses the intimacy and eloquence of the original work, with detailed notes elucidating the text. This edition also includes an introduction by Diskin Clay, exploring the nature and development of the Meditations. Marcus Aelius Aurelius Antoninus (121-80) was adopted by the emperor Antoninus Pius and succeeded him in 161, (as joint emperor with adoptive brother Lucius Verus). He ruled alone from 169, and spent much of his reign in putting down various rebellions, and was a persecutor of Christians. His fame rest, above all, on his Meditations, a series of reflections, strongly influenced by Epictetus, which represent a Stoic outlook on life. He was succeeded by his natural son, thus ending the period of the adoptive emperors.

I originally bought the version by Nexus, but changed it as it was a bit of a struggle to understand it. The narrator of this Penguin version is an experienced actor (see the Penguin website for more info), and as a result the reading is clear and understandable, with the correct emphasis, breaks, etc. The translation is different from the popular Hays translation, with the emphasis of this edition seems to be to capture the eloquence of the emperor. The volume could be louder but otherwise superb.

This audiobook is evidently based on a modern edition of this work and it would be nice to know who created it. Richard Armitage's performance saves it from audio purgatory, as his energy and clarity (and ever-mellifluous voice) help to make abstruse sentences understandable. (The introduction however, despite his best efforts, is very hard going and not good material for an audiobook.) I would recommend listening twice to some chapters to pick up more of the meaning.

Enlightenment by Marcus A. Enjoyment by Richard A.

No better voice to bring the words of Marcus Aurelius to life that Richard Armitage.

I think listening to this work through is a very good first introduction to Marcus Aurelius’ meditations, but in order to actually meditate on them, I’ll need a paper copy to annotate and take extracts from. As a complete listening experience, it was not too different from listening to the wonderful voice of Richard Armitage read bus timetables, as thoughtworthy statement after statement piles up, until the whole feels like a parent haranguing their child... and then I’m reminded that these are the private thoughts of an emperor, and probably every word should be attended to. So, I’m off to find a copy in a bookshop, right after I listen to the introduction again.

This narration by Clay is one of the best, absolutely excellent control of pace and ease of listening.

Could listen to this over and over

Great way to stay grounded and to maintain reason and perspective. The teachings of Marcus Aurelius really helps you to focus on your character and discipline. Fosters a sense of gratitude and personal ownership.

everyone should read this. It was like remembering my purpose. If people only held these truths in today's time the world would be a better place

The Meditations themselves are very powerful, but the academic commentary in the introduction was not necessary. The commentary wasn't a waste of time, but you might consider skipping it to get straight to the good stuff.

Loved the book. Might get it book form to have for review and life application.

Meditations is not just a book, it's a way of life. Wonderful wisdoms to live by, hours of material to drive introspection. I'll be listening to this text again and again and I will be better for it.

Richard Armitage is one of the few people where I can really enjoy listening too. His voice is clean and soothing and he still manages to engage you in whatever he reads. He has the perfect pace for narrating a book and I can only repeat it - I really love his voice!