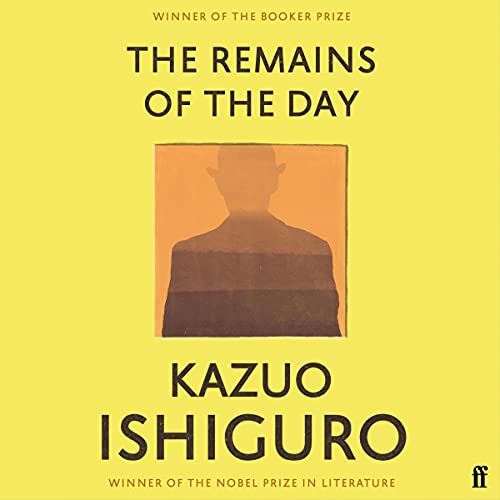 The Remains of the Day

From the winner of the 2017 Nobel Prize for Literature

A contemporary classic, The Remains of the Day is Kazuo Ishiguro's beautiful and haunting evocation of life between the wars in a Great English House. In the summer of 1956, Stevens, the ageing butler of Darlington Hall, embarks on a leisurely holiday that will take him deep into the countryside - and into his past.

This is still a rare jewel of a book: prose as clean as freshly polished silver and perfectly poised narration. As listeners/readers we are painfully drawn to the silent spaces of the 'unsaid'; we experience Steven's interactions through his carefully cultivated professional distance. As you might expect of a world-class writer, Ishiguro masterfully illustrates the chronic human curse of having to constantly deduce what is happening in the minds of others.
As if that wasn't enough, Dominic West's performance is flawless.

Way better as an audiobook

I had to read thos book for my literatute class amd couldnt get trought the first chapter. As an audio book however, and thanks to the narrator s great performance, i found muself very engaged with the story. Mr Stevens really comes to life in this format.

I'd seen the movie - a long time ago - but had never read the book.

It is simply & beautifully told. Stevens sets out on a road trip in his employer's car for a week. The week is filled with reverie of his life over 30 years as butler to a great household & his relationship with former housekeeper Miss Kenton.

Stevens' focus throughout his career has been on dignity within his role as butler & we become aware what he has sacrificed to achieve & maintain this goal. He too seems to become aware & regrets the impact the sacrifice this focus has had on his relationship with his father & also his potential love interest.

Stevens' character is well crafted, the story is a moving one of a life when the large English houses were the hub of political activity. It is wonderfully told & narrated.

Stevens weighs his regrets but resolves to enjoy the remains of "his day".

The remains of the day is without a doubt one of the best pieces of literature from the 20th century.

Wow, what a story.

This book moved me to my inner core. It made me think about life and the choices I made in a new and brighter light. No wonder Ishiguro won the nobel prize, it was well deserved.

An almost Victorian novel in style and character. I love the way it was set.

My brother recommended this book as his all time favourite. I listened to the wonderful narration by Dominic west and I can understand why he loved it so much. my brother has read the book and I am sure he will love this version even more.

This novel works at lots of levels.

i immensely enjoyed this book. The reader is perfect. It shows a slice of history undergoing change. The author show the foibles of human nature with care and gentleness. Very touching. Clever. Satisfying.

I loved it! The story is really great, the performance of the narrator is top range. I highly recommend it.

There is a gentleness and sadness in the writing

Would you consider the audio edition of The Remains of the Day to be better than the print version?

I originally thought the narrative voice was too young but as the story progressed, his voice took on the gentle quality of the writing and his tone was just right. Sometimes, words need to be spoken aloud to appreciate the lyrical quality. This had a gentleness and a deep sense of loss.

What was one of the most memorable moments of The Remains of the Day?

The use of the journey to tell the stories about his life as a butler, his loyalties to his father and his ignorance in love.

Originally I thought his voice was too young but in the end I felt he had read the story with the poignancy it required.

No, this is a book that takes time, it is a journey.

A tender and touching story of a life spent in the service of others. Nobel laureate Ishiguro is Japanese by birth but he vividly captures the nature and nuances of Englishness in the years before and soon after the Second World War. The narrator Dominic West splendidly embodies that English character employing convincing English manner of speaking both posh and rural.
A most enjoyable and poignant read.

Amazing book. Dominic West is a great narrator that enhances the experience of the book.

A joy to listen to

I loved every second of this audio book. The reader conveys the over serious character of Mr.Stevens so well and the humour of his narrations comes over to full effect.
I was so sad when it was at an end😯.

A masterwork in triviality

How unsatisfying it is ever to be engaged in self-doubt and regard for the opinions of mere mortals. Being a servant is indeed a noble calling. The greatest man who ever walked this earth came not to be served but to serve. To live in awe of people, however, is vain and, well, unsatisfying.

An incredibly well-written story performed brilliantly by Dominic West. His voice acting was absolutely on point and gave justice to this great piece of literature. I wholeheartedly recommend listening to this audiobook. It’s an amazing journey.

well, what really remains of the day ...

a remarkable Story
this is modern literature at its peak
not meant to be entertaining, even if it's hard to make a break while listening