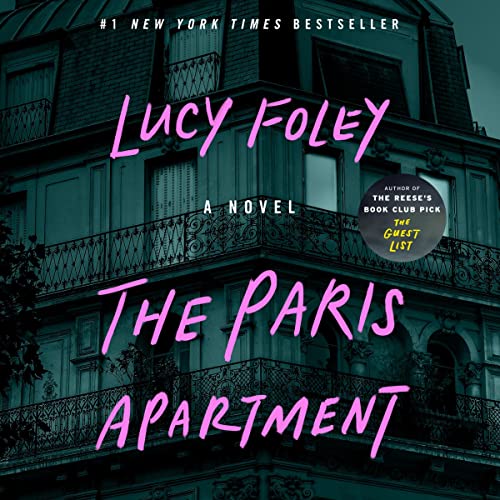 "As you patiently await season two of Only Murders in the Building, cozy up with Lucy Foley’s latest whodunnit." (Parade)

From the New York Times best-selling author of The Guest List comes a new locked-room mystery, set in a Paris apartment building in which every resident has something to hide....

Jess needs a fresh start. She’s broke and alone, and she’s just left her job under less than ideal circumstances. Her half brother, Ben, didn’t sound thrilled when she asked if she could crash with him for a bit, but he didn’t say no, and surely everything will look better from Paris. Only when she shows up—to find a very nice apartment, could Ben really have afforded this?—he’s not there.

The longer Ben stays missing, the more Jess starts to dig into her brother’s situation, and the more questions she has. Ben’s neighbors are an eclectic bunch and not particularly friendly. Jess may have come to Paris to escape her past, but it’s starting to look like it’s Ben’s future that’s in question.

The socialite. The nice guy. The alcoholic. The girl on the verge. The concierge.

Everyone's a neighbor. Everyone's a suspect. And everyone knows something they’re not telling.

A cash-grab, plain and simple

I buy about 100 audiobooks a year, a solid number of them being pop mysteries. Months later I don't remember the specific plots and characters, only whether or not the books held my attention. Lucy Foley's last two novels did that, so I pre-ordered The Paris Apartment and started it the day it appeared in my library.

Over the course of a week, I waited and waited for the story to grab me—it never did. With so many characters, I expected to find one or two to like—I never did. I didn't care about the central mystery. I had no reaction to the big reveal. (If a story is not at all interesting, how much can I care when new facts come to light?)

Lucy Foley released a hit book in 2020, and pandemic audiences are hungry for new titles. She rushed this into production, probably aided by some "8 characters you find in every modern thriller" clickbait article. (If you have a different narrator every chapter, the audience might not notice how thin the story is!)

By now I've forgotten who the victim is. I think it might be us.

I love Lucy Foley’s books, but this one was slow, disjointed and kind of unbelievable. There were too many characters and narratives and it just fell flat for me.

Also the narration wasn’t great, to be honest.

If you’re new to the author, I’d suggest The Hunting Party or the Guest List instead.

Since I first read The Guest List I was hooked. The way Lucy tells a story I couldn’t get enough! I then read all her other books and saw this one coming out soon. I re ordered and read/ listened to it in a day. Soooo good. If you like a real mystery told so perfectly, you must read this book and all her others!

One of the best books that I have listened to in the past year. Had difficulty putting it down.

This whole story could have been told in a lot less time! Too drawn out! I usually love this author’s books , not this one.


This overly dramatic, implausible story is so boring. It’s seems like the author is trying to extend the length of the book by the meaningless and trivial observations of its characters. Endless descriptions of how each character feels when something happens lead them to repeat words like “fear” with qualifiers to emphasize their feelings. You will pull your hair out waiting for them to finish so something can happen, which it rarely does. Foley is the author equivalent to a used car salesman.

Lackluster? I think? I don’t know

Maybe I need to sit down and listen to this again, because I usually love Lucy Foley’s work. I love multiple characters, mystery, lots of background, and lots of secrets.

This book has all of those things and even a pretty decent/satisfying ending, but.. I just could not get into it. None of the characters had any sort of impression on me and I couldn’t get into the suspense. I can’t even put my finger on why.

Will continue to support Foley because she’s amazing. But this one was hard to get through.

I preordered this book and have been anxiously awaiting its arrival for weeks.
Usually when I do this I am at least somewhat disappointed because my expectations are insanely high.
Not the case here. This is an incredibly well written book which could have been no easy feat as the structure is very unique and pretty complicated.
There are multiple characters (all exceedingly well developed), many different perspectives, which usually only confuses the reader.
In this case, we end up with a cast of relatable (although flawed) characters, a very spooky setting, the added layer of there being overlapping and shifting alliances, and several fascinating historical elements between the characters themselves.
I couldn’t put this one down.
Brilliantly executed, and with perhaps the most relatable, and reliable protagonist in recent memory.
I fell in love with Lucy Foley from the instant I read “The Hunting Party”.
That love only deepened with “The Guest List”
And now this…
Just when I think her writing cannot possibly be improved upon, she one ups herself.
Then, when I realized she’d written this book, pregnant, in a pandemic, and completed it as a woman with a newborn baby, well…I couldn’t be more impressed.
She writes with such an empathy towards her characters, no matter how dark or flawed they may be and this is quite inspiring, on every level.
The narration is phenomenal, each and every character is performed with expert precision.
All of these performers are incredibly talented and fulfill their roles beautifully.
I would say, this is a truly perfect listen.
Creepy, beautiful, complex, rich, and extraordinarily well performed (particularly Claire Corbett, what a voice!)
The only disappointing aspect of this book is that it had to end!
I finished it in one night.
Thank you for a phenomenal listen, and a spooky good time.
I can’t wait to see what she does next.

The book kept me interested, and I enjoy Lucy Foley's writing style with multiple 1st person viewpoint. I liked the story line, but wished she would have developed the characters just a little bit more. That being said It is still a book I have recommended to my book loving friends!

I already am a huge fan of this author so when I saw she had a new book being released I had to reserve it. I love everything about this book, from the beginning the story captures you and then hours passed and you've think you've solved it but she keeps you guessing and wanting more. Listening to this on audible was the cherry on top, the voice acting was perfect and easy to follow and enhanced the story, Highly recommend.