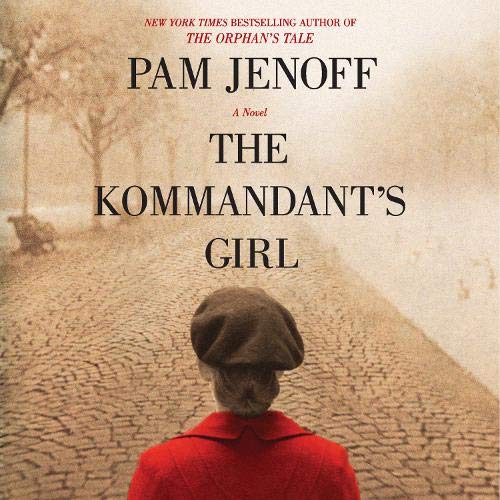 In her luminous and groundbreaking debut, New York Times best-selling author Pam Jenoff shows the unimaginable sacrifices one woman must make in a time of war.

Nineteen-year-old Emma Bau has been married only three weeks when Nazi tanks thunder into her native Poland. Within days, Emma’s husband, Jacob, is forced to disappear underground, leaving her imprisoned within the city’s decrepit Jewish ghetto. But then, in the dead of night, the resistance smuggles her out. Taken to Krakow to live with Jacob’s Catholic aunt Krysia, Emma takes on a new identity as Anna Lipowski, a gentile.

Emma’s already precarious situation is complicated by her introduction to Kommandant Richwalder, a high-ranking Nazi official who hires her to work as his assistant. Urged by the resistance to use her position to access details of the Nazi occupation, Emma must compromise her safety - and her marriage vows - in order to help Jacob’s cause. As the atrocities of war intensify, Emma must make choices that will force her to risk not only her double life, but also the lives of those she loves.

Didn’t realize this was a bodice ripper.

This was one of the stupidest, most prurient, repetitive, poorly written books I have ever experienced. It was repulsively exploitative of one of humanities great tragedies without the slightest bow to historical insight. I only continued to listen to it because I was fascinated by its inanity. The worst narration. Oh my! It could not have been any smarmier, nor any weepier. Yikes! Yuck!

I am a sucker for WW II non-fiction and fiction. I am especially drawn to Holocaust-related story lines. This book seemed like a natural for me. Although I finished it, I did not do so with great enthusiasm. WARNING: Slight spoilers ahead: The protagonist spends an inordinate amount of time dithering about what she "should" do -- an annoying chunk of the whole book is the protagonist just agonizing repetitively (and without much suspense involved!) over what she is about to do, that is technically wrong, but that she is obviously about to do, anyway. In truth, the author uses all of this drawn-out navel-gazing simply to justify the "bodice-ripping" that goes on. The protagonist (we are to understand) has no choice about her extramarital affair with the handsome, well-mannered, well-educated, besotted, widowed Austrian Nazi officer. (An officer who, conveniently, is morally torn about Germany's position in the war.) The protagonist MUST allow herself to indulge in this sexual affair for the good of the Polish Resistance. (She: a naive innocent -- barely more than a girl. But apparently irresistible to the officer.) Bodice-ripper, much? About half-way through the book, I sped up the narration to 1.3X speed. Not long thereafter, I increased the speed to 1.5X. The narrator was fine, although just a bit on the poky side. No: The need to speed up the narration (which I virtually NEVER do!) was not down to the narrator. Rather, this speed-up gives you an idea of how slow-going, repetitive, and plodding the TEXT was. The protagonist's dithering and whining is my main complaint. (Corollary: Protagonist: ACT YOUR AGE!) Aside from that, I found that the protagonist continued to make DUMB decisions -- not morally, but logistically. She acted as a spy, but seemed to have no clue at all as to how to proceed. Not the slightest common sense. Nor did anyone who was advising her provide her with good advice. (One example: She stole/borrowed a key to the Commandant's apartment. And also she looks for papers while he sleeps. Wouldn't it have been much safer and easier for her to use wax or similar to make a copy/impression of the key, so that someone could enter the Commandant's apartment while he was out for a lengthy period of time?) Then there are the internal inconsistencies and the anachronisms. First, everyone (and I mean EVERYONE, including the Austrian, Nazi Commandant) says "okay" all of the time. Anachronistic. Second, at the beginning of the book, believably enough, the protagonist goes to the market and finds little decent food, almost no meat, etc. Yet a year or two later, she is happily making beef stew with potatoes and (if I recall correctly) with peas or beans. There are a number of other annoying internal inconsistencies. The Nazi officer (at age 50!) is at first a virtual sex machine (multiple times a night; as many times a week as he can manage to get the protagonist to sleep over). Then, later, we are told (quite casually) that he is so preoccupied with the war that he has more or less forgotten (socially) all about this girl with whom he is madly in love and sexually obsessed, so preoccupied (as I said) that he has forgotten all about her for at least a month. Third, there are a number of contrived and Deus-ex-Machina coincidences and scenes. (Example: The Resistance not only knows that one of the Nazis has a safe in his office that contains valuable blank passes, but also -- HOW???? -- somehow knows the EXACT COMBINATION to this high-ranking Nazi officer's private office safe. As well as where the secret key to his inner office is kept. Now, come on -- WHERE did the Resistance come by the COMBINATION TO THE SAFE???? Puh-leaze!) There are people who appear at just the right moment, inserted into the plot with a heavy hand. There are people who are angry out of proportion to the situation. Some are secretive and paranoid. (This conveniently advances the plot.) Then, poof!, these same people are -- at a different moment -- maybe self-sacrificing, loving, and/or willing to spill the beans about whatever is going on. There are too many unexplained loose ends. Too many characters who behave OUT of character and create melodrama befitting a soap opera, rather than a well-crafted novel. Let me just say that this is especially true of the climax -- at least as I saw it. The dangers of Auschwitz and the Nazi occupation of Poland were less vivid, to me, than was the protagonist's faux soul-searching and the rather predictable self-realizations that followed. Use a credit on this book if you like light fiction and bodice rippers. Don't waste your time if you are looking for serious WW II drama.

This is a story of a love/hate relationship that stirs great emotion in the listener. I was moved, saddened, angered, warmed, disgusted, on edge, and filled with hope for the characters in this must read novel. This complicated love story that takes place in the worst time in our history, will not soon be forgotten.

WWII has always intrigued me. I still question how humans can destroy each other. Hitler hated Jews. This story proves that 2 people with different nationalities can love each other. When German realizes he is in love with a Jew he is not able to hate her, yet his nationality dictates that he is supposed to. I believe some of the hate still prevails to this day

Narrator made the main character seems weak and Whiny.

This was a good story about a woman who comes to understand her own strength But the narrator made her seem weak and whiny. It took away from the story. Would have been a better read.

The Kommandant's Girl had me from the beginning! This has left me wanting to read book 2 The Diplomat's Wife soon to find out what happens to the characters that have come alive!

It kept my interest til about 2/3 way through. Then it got overly dramatic, a typical romance novel that I normally don’t read. Just not my type for the last 1/3. Predictable. Read well. Would not recommend to most of my friends.

I found the main character rather irritating and certain plot twists toward the end were rather unbelievable.

Good book but I didn’t care for the ending

I enjoyed the book and the story is definitely interesting. Overall it’s well written and the characters are well developed enough to keep you invested in how it turns out. However, I didn’t really like how the ending kind of wrapped up the existing questions/problems really quickly and then kind of glossed over how many more problems still awaited the protagonist. I understand the author probably wanted to end on a hopeful note but it just seemed a bit glib to talk about birds chirping etc. All in all it was a good listen and I’ll probably try out the next one in the series as well.

Loved it! The twists and turns and story were super. Could not put it down!