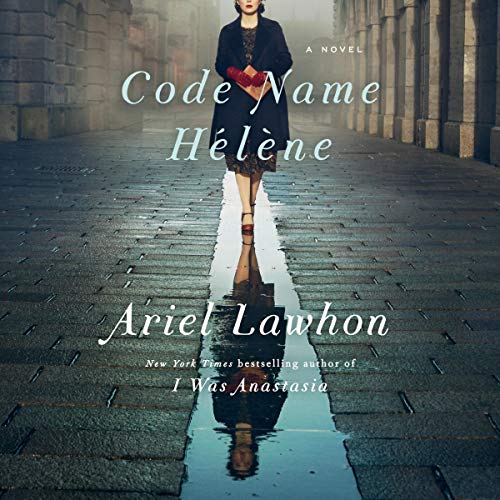 Based on the thrilling real-life story of socialite spy Nancy Wake, comes the newest feat of historical fiction from the New York Times best-selling author of I Was Anastasia, featuring the astonishing woman who killed a Nazi with her bare hands and went on to become one of the most decorated women in WWII.

Told in interweaving timelines organized around the four code names Nancy used during the war, Code Name Hélène is a spellbinding and moving story of enduring love, remarkable sacrifice, and unfaltering resolve that chronicles the true exploits of a woman who deserves to be a household name.

It is 1936, and Nancy Wake is an intrepid Australian expat living in Paris who has bluffed her way into a reporting job for Hearst newspaper when she meets the wealthy French industrialist Henri Fiocca. No sooner does Henri sweep Nancy off her feet and convince her to become Mrs. Fiocca than the Germans invade France and she takes yet another name: a code name.

As Lucienne Carlier, Nancy smuggles people and documents across the border. Her success and her remarkable ability to evade capture  earns her the nickname "The White Mouse" from the Gestapo. With a five million-franc bounty on her head, Nancy is forced to escape France and leave Henri behind. When she enters training with the Special Operations Executives in Britain, her new comrades are instructed to call her Hélène. And finally, with mission in hand, Nancy is airdropped back into France as the deadly Madam Andrée, where she claims her place as one of the most powerful leaders in the French Resistance, armed with her ferocious wit, her signature red lipstick, and the ability to summon weapons straight from the Allied Forces.

But no one can protect Nancy if the enemy finds out these four women are one and the same, and the closer to liberation France gets, the more exposed she - and the people she loves - become.

“Magnificent. . . Lawhon carries us into the heart of the French resistance [and] into the mind of a badass heroine with uncanny instincts who takes on the Nazis and men’s arrogant sexism with uncommon bravado. . . Even long after the last page is turned, this astonishing story of Wake’s accomplishments will hold readers in its grip.” (Booklist, starred)

“A spellbinding work of historical fiction. . . [and] one of the most sensual romance novels you’ve ever read. . . She is real, this really did happen is the mantra you may find yourself repeating, in awe of every page.” (Bookpage, starred)

Such a great book

I rarely give 5 stars, reserving that award for truly great books. I loved this book. I only wish I had known it was a true story before I read it. I'd like to read it again wit that revelation. If you liked The Nightingale or Under the Scarlet Skies, you'll love this book.

Great story of a great woman, fictionalized to grab the reader's interest, and it surely does. I love to listen to historical fiction of the era, and this is as good an example as any. Some seem to think that the magnitude of WWII alone is enough vehicle to carry a story, but this author does her job, delivering depth of character and interaction with events as a backdrop; like a good story should.

Excellent historical novel - I could not put it down!

I loved this book. I cannot believe I had never heard of Nancy Wake before listening to this book. It has all of my favorite characteristics, historical, taking place over different time periods, intrigue, suspense, romance, courage, and excellent character and plot development. I will definitely look for more books by this author. I have no hesitation to recommend this book.

I love the book it was excellent. I thought that the narrator’s were superb. I would love to listen to them together again in the future. Thanks

Cheers for the narrators. But... if a story is worth telling, why hack the story timeline into pieces, shuffle it, and annoy the listener with the task of reassembling it? In my opinion, it did not add noteworthy drama to the work.

Captivating and based on true figure

This was such a great listen. The narrators were superb. The story is based on a heroic and unflinching woman and it stole my heart. Read it! Nancy Wake deserves to be known to many.

I did not want this book to end!! Nancy Wake is such an inspiring woman and it this was an incredible story. Couldn’t stop listening.

One of my favorite books I have ever listened to, and possibly one of my top favorite books ever! I love reading about the heroic actions of those who lived and fought in such a dark time in history! Nancy’s life was absolutely unbelievable!! I did not want this book to end!! It did not disappoint!

I loved this book. I listened to it over two days and finished it. The narrator brought the story to life . A must read

Do not hesitate to listen or read this!

This story is incredible. The writing is engaging. And the narrators perfectly handle a mix of many accents. Do not hesitate to listen or read this!