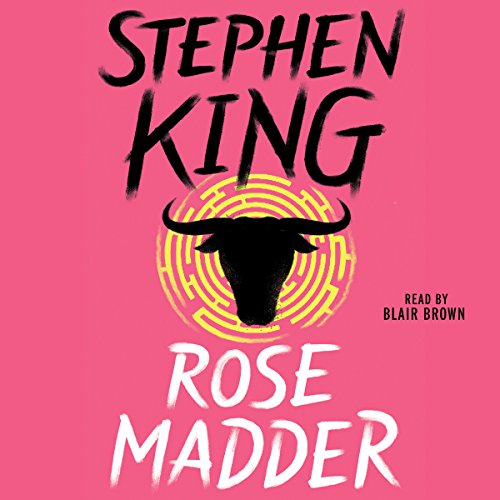 The number-one national best seller about a woman who escapes an abusive marriage is "one of Stephen King's most engrossing horror novels. Relentlessly paced and brilliantly orchestrated...fueled by an air of danger immediate and overwhelming" (Publishers Weekly).

Rosie Daniels leaves her husband, Norman, after 14 years in an abusive marriage. She is determined to lose herself in a place where he won't find her. She'll worry about all the rest later.

Alone in a strange city, she begins to make a new life, and good things finally start to happen. Meeting Bill is one, and getting an apartment is another. Still, it's hard for Rosie not to keep looking over her shoulder, and with good reason. Norman is a cop, with the instincts of a predator. He's very good at finding people, even if he is losing his mind.

Fixed on revenge, Norman Daniels becomes a force of relentless terror and savageness, a man almost mythic in his monstrosity. For Rosie to survive, she must enter her own myth and become a woman she never knew she could be: Rose Madder.

I love this story, I had already read it twice. and the narrator is really good. the only annoying thing is the "music" they put over the voice at the end and beginning of each chapter. you can't hear the voice properly.

If you like King you will probably find much to enjoy with this one. My only complaint is really just a quibble. This recording has bumper music to separate various sections of the book. The music is at times very creepy which is very cool. Occasionally the music is too loud as it plays over the narration. Any overall very enjoyable.

Cat's claws on a chalkboard

SCREECHING SOUND EFFECTS. I have listed to more audiobooks than I can count, and I have never heard one with such awful audio quality. Not only do the screeching sounds effects and music overlay the narrators, but they are so jarring I found myself having to rewind to figure out what just happened. Moreover, Stephen King does the voice of the antagonist, and for all of King's considerable skills, he is NOT a narrator. I also hate saying all this because Blair Brown is a skilled orator and does not deserve to have her name associated with this. I strongly suggest reading the dead-tree edition of this.

The story itself is a theme that King writes about very well: abused women. I found protagonist, Rose, to be sympathetic and interesting in the beginning, but a bit weird (the painting) as the story went on. Her husband, the antagonist, is a sadistic psychopath. In the hands of any other writer, I would not have been able to suspend disbelief over his character, but somehow King, as usual, makes it work.

This is an excellent book made even better by Brown's excellent performance interspersed with King reading Norman's parts. The ONLY thing about this recording that I have any complaints about, is the music that occasionally barges in. Music can certainly enhance the story when done well but in this case it's too loud, jarring, and distracting, pulling you out of the story instead of wrapping you up in it. A small complaint, but a justified one. Luckily the excellent story and wonderful performance of the narrator makes it easy to overlook this small fault.

So great, so Stephen King

Wow great villain, great characters, great story. A bit long at the end but minor issue. The story was so worth it. I'd recommend this book to everyone. (Unless you can't handle the King that is)

What disappointed you about Rose Madder?

The background noise at the start of the book's narration made it difficult for me to understand the narrator. I have a hearing loss and I struggled to separate out the narrator's voice from the noise. I was driving and started to listen to the book (I generally listen to books from Audible when driving long distances). At first, I thought the noise was the sound of the car's tires on the pavement; then I realized it was background "ambiance" for the narration at the start of the book. I had to listen to the beginning of the book several times to catch everything. I purchased the book to hear the narration, NOT the "ambiance". I'm not interested in going through this periodically throughout the book. I'm returning the book. I'll purchase and download the Kindle version of the book and just read it. I'll listen to other Audible book on my next trip.

Completely brought me in

From Page 1, he brought me into the story. Having experienced some of the things that the main character had, with domestic violence, the book was riveting and emotional for me. Sometimes it was difficult. I was ALL in. Fantastic!!!

If you don't like music I the background of your audiobooks, avoid this one. It's not so much music as squawking and overtakes being able to hear the actual text. I love Stephen King's work and hadn't read this one yet so it was disappointing to hear another production with these horrible musical transitions that add nothing to the story or audible experience. Insomnia was this way also, from now on I'll be researching the production company and info before any more SK audiobook purchases.

recommended by a friend

it started out kinda slow and I didn't know if I was gonna be able to listen to it go on and on but then it picked up after the pawn shop.

The reader was great, I just wish they'd cut out the "music" it was distracting.

Good acting, not King's best in my opinion

Blair Brown and whoever does Norman's chapters both perform very well, and were a pleasure to listen to. The sound effects, however, were often rather off-putting, at least to my ears.

While the story was compelling, I didn't find that it drew me in in the same way that some of King's other works have.

performance by Blair. S. King parts were great too. story very compelling. why are 15 words necessary to write feedback?