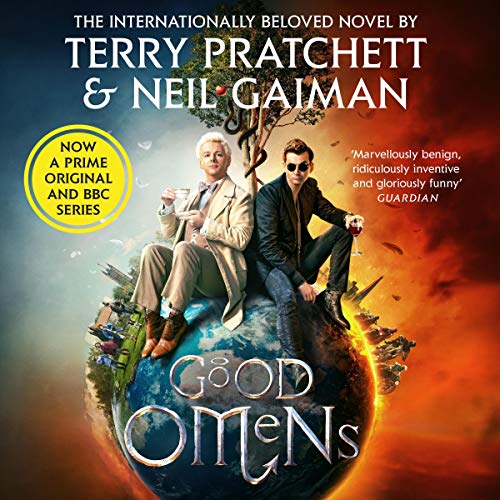 The internationally beloved novel by dream literary collaborators and internationally bestselling writers, Terry Pratchett and Neil Gaiman. Soon to be a massive new TV launch on Amazon Prime Video and the BBC, a series written and show-run by Neil himself and starring David Tennant, Michael Sheen, Jon Hamm and Miranda Richardson, to name but a few.

There is a hint of Armageddon in the air. According to the Nice and Accurate Prophecies of Agnes Nutter, Witch (recorded, thankfully, in 1655, before she blew up her entire village and all its inhabitants, who had gathered to watch her burn), the world will end on a Saturday. Next Saturday, in fact.

So the Armies of Good and Evil are massing, the four Bikers of the Apocalypse are revving up their mighty hogs and hitting the road, and the world's last two remaining witchfinders are getting ready to Fight the Good Fight. Atlantis is rising. Frogs are falling. Tempers are flaring, and everything appears to be going to Divine Plan.

Except that a somewhat fussy angel and a fast-living demon are not particularly looking forward to the coming Rapture. They've lived amongst Humanity for millennia, and have grown rather fond of the lifestyle. So if Crowley and Aziraphale are going to stop it from happening, they've got to find and kill the AntiChrist (which is a shame, really, as he's a nice kid). There's just one glitch: someone seems to have misplaced him.

The story is sometime hard to follow. The reader makes no pause between chapters and in dialogues. Some voices are too similar to distinguish.

All it's hyped up to be

As someone with a Catholic upbringing and agnostic adulthood I found this very entertaining, clever and meaningful.

A cultural classic and a must read.

Not the best version

You’ll find better audio versions of this book elsewhere (and apparently could find it here until recently), but this is currently the only one here, presumably because it’s the newest. Martin Jarvis reads well, but I disagree with some of his choices in characters’ voices.
I’ll return it as soon as the Stephen Briggs version becomes available again.

Loved it ..awesome narration. One of the best story telling I have ever come across.

Good story, but they could have cut 30% and it would have been a better book.

What else can you do after you finish the Amazon mini series?

I watched the (mini) series but - obviously - needed more! Which is why I downloaded this audiobook :) It did the trick, although I believe the film version was better than the book (something that happens way too rarely). In any case, I enjoyed the audiobook and can recommend!

Even the 4th time round, this book is awesome

This is the only book I’ve ever read more than once.
I simply love the dark humour of Terry Pratchett and Neil Gaiman.

Martin Jarvis did them proud . His narration is flawless.

I have listened to the radio play of Good Omens many times. I have watched the series. The book is still the best version. Mr Jarvis, thank you.

I expected something close to The Hitchhiker's Guide to the Galaxy. In a way it is, but somehow it does not quite ring my bell.

love everything about this book, heard and read it several times.. read it.. :)

"if you stopped tellin' people it's all sorted out after they're dead, they might try sorting it all out while they're alive."

Good Omens is an entertaining book with funky humour. It does not have a thrilling storyline or mind-bending plot, but The dialogues are sarcastic and funny. I had trouble understanding the religious references since I'm not a Christian; however, that did not stop me from enjoying the story. Yet, there are some boring sections along the way.

Martin Jarvis does a decent job with the narration. I prefer shorter chapters in audiobooks that will give me natural stopping points and help me keep up better with the storyline. In this sense, this book was not a great example. Most chapters are over an hour, and the Saturday chapter is 6 hours and 13 minutes. There are no indications between storylines, so it is easy to lose track.

In general, I thought this was a decent book to pass the time and have a few laughs. There are decent discussions about today's society and sarcastic comments. I will definitely watch the TV series as well.

Loved the book, the story is great. I have the paperback book and the narrator made it way more fun to go through instead of just reading. The narrative was almost exactly equal to the book, with some very small and rare exceptions.

loved it! only they could have tried to split it into more chapters instead of leaving it in the "day by day" structure.
apart from that it has been a great book, good narration. the short musical interludes create a nice atmosphere. plus: it had been quite some time since a book made me laugh out loud (and also made my write a review;)

Good Omens is a thoroughly enjoyable audiobook. Terry Pratchett & Neil Gaiman composed a delightful and inventive story with memorable characters, hilarious situations, some drama and an endearing attention to detail. It provides both laughing out loud entertainment and food for thought. Martin Jarvis portrays each and every of the numerous characters with care and gives them their own tonation, accent and style. The fictional world feels very alive with all the different voices. Jarvis' reading, almost a dramatisation, is well-paced, although one has to pay close attention in order to catch all the funny details.

An interesting, funny, entertaining and surprising story that I can just recommend for everyone to listen to, especially if you're interested in Christian Mythology.

Not as an audiobook

This book is amazing. It has everything one could wish for. Witty humour, amazing detail, great storytelling and the ability to fascinate you, every time you reread it.

But: This is not a good audiobook. At least not for me. I sometimes lose my concentration on the story for a few seconds when I change the busline, make some tea or start thinking about a subject in the story. Most audiobooks are forgiving and it's easy to get back into. This isn't. In this book the latter example of making me think (or laugh) to much happens so frequently, that I probably missed half the book and even rewind was at some point not helping anymore and details are to many (and to funny) to be able to follow the plot without. I now picked up a printed copy. It's the better medium for this truly great story.

i absolutely love the book (as well as the series, which i was really happy to find out is very close to the actual book) and the narrator did a beautiful job reading it

Wonderful story, ingenious reading by Martin Jarvis with an amazing range of characters--marvellous and funny

I love both authors so much. Together they bring best out of eachother. Great reading.