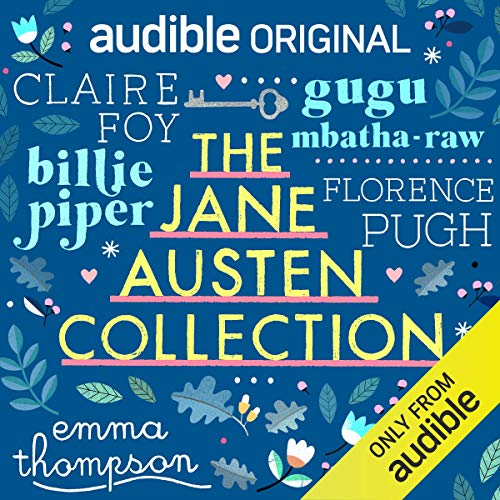 Austen introduces us to the Dashwood sisters who upon the death of their father are left with little money or status and without their family home. Marianne Dashwood wears her heart on her sleeve and when she falls in love with the dashing but unsuitable John Willoughby she ignores her sister Elinor's warning that her impulsive behaviour leaves her open to gossip and innuendo. Meanwhile Elinor, always sensitive to social convention, is struggling to conceal her own romantic disappointment, even from those closest to her

Pride and Prejudice is centred around the Bennet family, their five unmarried daughters and their mother’s desperation for at least one of them to make a wealthy match to save the family from destitution. When Charles Bingley moves into Netherfield, a nearby estate, it seems that Jane, the eldest daughter, may have found her match, but it also introduces our heroine Elizabeth to Bingley’s friend, the aloof Mr Darcy.

Adopted into the household of her uncle, Sir Thomas Bertram, Fanny Price grows up a meek outsider among her cousins in the unaccustomed elegance of Mansfield Park. Soon after Sir Thomas absents himself on business, Mary Crawford and her brother, Henry, arrive at Mansfield, bringing with them London glamour and the seductive taste for flirtation and theatre that precipitates a crisis.

Emma is perfectly content with her life and sees no need for either love or marriage; nothing however delights her more than matchmaking her fellow residents of Highbury. But when she ignores the warnings of her good friend Mr. Knightley and attempts to arrange a suitable match for her protegee Harriet Smith, her carefully laid plans soon unravel and have consequences that she never expected.

A coming-of-age tale for the young and naïve 17-year-old Catherine Morland, Northanger Abbey takes a decidedly comical look at themes of class, family, love and literature. Revelling in the sensationalist - and extremely popular - Gothic fiction of her day, the story follows Catherine out of Bath to the lofty manor of the Tilneys, where her overactive imagination gets to work constructing an absurd and melodramatic explanation for the death of Mrs Tilney, which threatens to jeopardise her newly forged friendships.

Starring Emma Thompson as the narrator.

Anne Elliot, daughter of the snobbish Sir Walter Elliot, is woman of quiet charm and deep feelings. Eight years before our story begins, she is happily betrothed to a naval officer, Frederick Wentworth, but she breaks off the engagement when persuaded by her friend Lady Russell that such a match is unworthy. The breakup produces in Anne a deep and long-lasting regret.

Emma & Northanger Abbey: In case you missed it, this collection includes Emma & Northanger Abbey with Emma Thompson that were previously released in 2018 and 2017. They are superb, and have been richly discussed already. Pride and Prejudice: Claire Foy is a brilliant narrator! She does a fantastic job conveying both the excitement of each scene and Austen’s subtle irony. There are also great performances from the main cast: Lizzy, Darcy, Jane, Mr. Bingley, and Mr. Collins (to name a few notable characters) are carefully delineated and the energy among them is captivating. However, I was disappointed with some of the supporting cast. Mr. and Mrs. Bennet are incredibly dull; at times it feels as if the two actors are just reading their lines cold. This is a shame, especially when compared to the endearing Alison Steadman and Benjamin Whitrow (BBC series, 1995) or the hilarious Brenda Blethyn and Donald Sutherland (2005). The excessive giggling makes Lydia and Kitty indistinguishable and all the nuances of their characters have been done away with. Overall, it is a delightful drama even if it falls short of the Emma & Northanger Abbey adaptations in the same collection. Persuasion: This is my favorite Austen novel, and I always thought the 1995 TV film with Amanda Root and Ciarán Hinds the most faithful adaptation of any of her work. So the stakes were a bit high for this one. Florence Pugh is a dynamic narrator. At first I thought that she was reading way too fast, but then I came around to her performance. Anne’s life feels suspended in time, as if she has been forgotten, and Pugh’s narration brings out Anne’s deep, hidden feelings that are the bedrock of the novel. The cast is very strong with one notable exception. Anne is perfect and so is Lady Russel. But Captain Wentworth! He sounds old, beaten up, and melancholic, when he is supposed to be at the pinnacle of his career and incredibly full of life and energetic (in contrast to Anne in the first part of the story). His character is disappointing, but does not ruin the experience. There are also a couple of unusual choices: Elizabeth is more reasonable and sympathetic than perhaps Austen intended, and Captain Wentworth has his sister, Mrs. Croft, too much in his confidence. Overall, it is a fresh and enjoyable rendition of Austen’s last novel, and I will listen to it again. Sense and Sensibility & Mansfield Park: Not my favorite Austen novels, so I have yet to finish them. The first few chapters of Sense and Sensibility are promising. Easy to navigate: This is in response to a previous review from Amazon UK. At least in the US, the titles are clearly labeled and I can easily navigate between the dramas both on the app and on the website. I got the collection when it was released on November 5, 2020, and I haven’t had any technical issues.