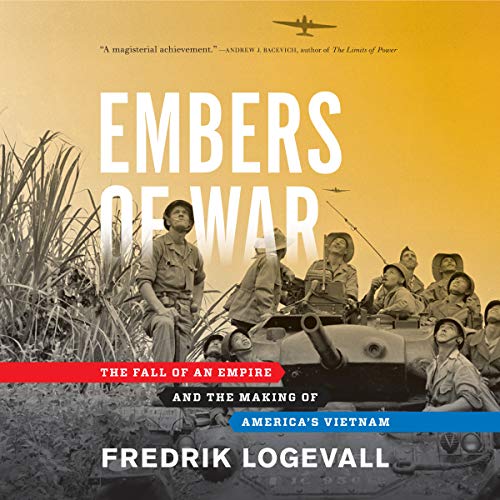 Winner of the Pulitzer Prize

Written with the style of a great novelist and the intrigue of a Cold War thriller, Embers of War is a landmark work that will forever change your understanding of how and why America went to war in Vietnam. Tapping newly accessible diplomatic archives in several nations, Fredrik Logevall traces the path that led two Western nations to tragically lose their way in the jungles of Southeast Asia. He brings to life the bloodiest battles of France’s final years in Indochina - and describes how, from an early point, a succession of American leaders made disastrous policy choices that put America on its own collision course with history.

An epic story of wasted opportunities and deadly miscalculations, Embers of War delves deep into the historical record to provide hard answers to the unanswered questions surrounding the demise of one Western power in Vietnam and the arrival of another. Eye-opening and compulsively listenable, Embers of War is a gripping, heralded work that illuminates the hidden history of the French and American experiences in Vietnam.

One of the most acclaimed works of history in recent years.

Named one of the best books of the year by:

“A balanced, deeply researched history of how, as French colonial rule faltered, a succession of American leaders moved step by step down a road toward full-blown war.” (Pulitzer Prize citation)

“A monumental history...a widely researched and eloquently written account of how the US came to be involved in Vietnam...certainly the most comprehensive review of this period to date.” (The Wall Street Journal)

“Fredrik Logevall’s excellent book Choosing War (1999) chronicled the American escalation of the Vietnam War in the early 1960s. With Embers of War, he has written an even more impressive book about the French conflict in Vietnam and the beginning of the American one.... It is the most comprehensive history of that time. Logevall, a professor of history at Cornell University, has drawn from many years of previous scholarship as well as his own. And he has produced a powerful portrait of the terrible and futile French war from which Americans learned little as they moved toward their own engagement in Vietnam.” (Alan Brinkley, The New York Times Book Review, editor's choice)

“Superb...penetrating...Embers of War is a product of formidable international research. It is lucidly and comprehensively composed. And it leverages a consistently potent analytical perspective.... Outstanding.” (Gordon Goldstein, The Washington Post)

“A remarkable new history.... Logevall skillfully explains everything that led up to Vietnam’s fatal partition in 1954...[and] peppers the grand sweep of his book with vignettes of remarkable characters, wise and foolish.” (The Economist)

The best and most detailed explanation of how America's Vietnam war begun. Too many forget the early Indochina war and how in the end, America walked in the footsteps of France, and like her, lost the war. A real master piece.

Nothing novel - good backstory for the unfamiliar

The questionable:
The author seemed like a strong French (and British) apologist and that the French were largely at the mercy of their American overlords following WWII. If you want to get the angle on how everything from maybe '48-'49 onward was America's (and not France's) fault, this book is for you. The odd thing is that he does explicitly mention that the French (and British) resisted America's anti-colonial opinions and policies so as to support their own declining empires but doesn't put together that they sold their efforts to the US as a battle against Communism when it clearly wasn't.

Additionally, if you've studied Viet Nam's history at all you appreciate the problems with the Diem government. The author here specifically mentioned the increasingly "draconian" measures of the Diem government as he worked to solidify his power. This is a fair assessment. What's weird as that the increasingly draconian measures were standard policy by the North from the beginning. For example, they were executing the children of village leaders and even nailing their babies to walls & trees. Despite the horrors that were common to both sides in this the author barely even gives lip service to what the North was doing and makes them sound like noble victims for having to suffer the hardships of fighting an insurgency in that environment. Obviously, in the idealized sense, there should be no support for either government, but then that goes down the "Quiet American" path where one (like the author) can't seem to differentiate between ideality and reality. I only mention that because the author seems quite focused on Greene. It's not at the absurd level of Ward & Burns but it's there.

I have always been a little puzzled about historians'/authors' position on the breaking of the '54 agreement with regards to elections. There's no doubt that Ho would've won and that not allowing the elections was a bit ironic given that the government of the South was supposed to be some flavor of Democracy. However, the same people never seem to take a step or two deeper. What happens when Ho wins and his entourage follows? Is one to think that subsequent elections would've allowed the people to steer their government? Is it even remotely conceivable that the Vietnamese people could've had "buyer's remorse" and altered the Communist government once it had taken hold? This is the same government that killed and/or imprisoned thousands or tens of thousands in the North and later did the same to upwards of a hundred thousand? The problem with the analyses that I've seen regarding the '54 agreement is that they never both to explore the consequences of having allowed that election to happen.

The good:
There is a lot of good information in this book and while you can get it from any other combination of books at least here it's all in one spot. There was nothing I hadn't read somewhere else but it was good to have it summarized (again). It's worth the listen.

Superb in Every Way

I could not stop listening to this book. The story is never boring. The narrator is perfect. I learned so much more about Vietnam and the scenes behind the war. The moral is profound. This one is easily in my top five of all time. None are better.

clear history of Vietnam before US

Starts off very strong but after about a third of the way through it starts going downhill and remains super boring until the end. The narrator’s voice also never changes tone, ever.

Studied Vietnamese “insurgency” in college. This book is perfect for those in need of a primer on the French colonial experience through to the initial American commitment.

And unbiased history of how do United States got involved in Vietnam.

This is a good history but very hard to listen to because of the many mistakes made by our government in supporting first the French that I corrupt South Vietnamese government. It is admittedly in my judgment a little biased but still very factual very well done and very well worth the read

Details tragedy of Roosevelts death and the impact of Truman blowing off Ho Chi Minh - when Ho Chi Min wanted to be a Jeffersonian anti colonialist formed from an American mold.

Loved it. A lucid narration of the first Vietnamese war. Highly recommended for students of international relations

I found this book very informative

I found this book informative. It filled in a lot of the background on why and how America got involved in VIETNAM.