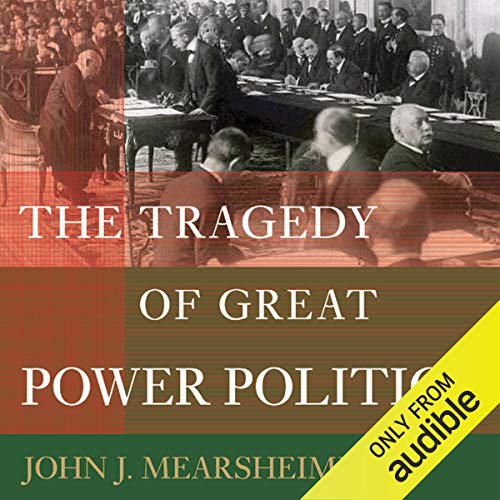 The Tragedy of Great Power Politics

A decade after the cold war ended, policy makers and academics foresaw a new era of peace and prosperity, an era in which democracy and open trade would herald the "end of history." The terrorist attacks of September 11, 2001, sadly shattered these idyllic illusions, and John Mearsheimer's masterful new book explains why these harmonious visions remain utopian.

To Mearsheimer, great power politics are tragic because the anarchy of the international system requires states to seek dominance at one another's expense, dooming even peaceful nations to a relentless power struggle. Mearsheimer illuminates his theory of offensive realism through a sweeping survey of modern great power struggles and reflects on the bleak prospects for peace in Europe and northeast Asia, arguing that the United States's security competition with a rising China will intensify regardless of "engagement" policies.

Measheimer does what few others are in able or willing to do: to approach geopolitics from a rigorous theoretical perspective, to take a rational, sober view of the world using rigorous methodology and both basing and assessing theory in comparison to the broad range of historical case studies.

In this work, Measheimer lays out in detail the theory of "offensive realism", a neo-realist school distinct from its sibling defensive realism, but also distinct from classical realism. The greatest contrast, of course, is with liberalism, which in the context of foreign relations means that realism is a materialist paradigm that sees politics as being shaped by geography, economics, and power relationships, with offensive realism having the specific prescripts about the nature of the dynamics behind the picture.

For example, offensive realism envisions states as sociopolitical entities whose primary goal is to survive, and because the need for survival quickly brings into view some obvious security dilemmas (states can't be certain of the intentions of others states, therefore they prepare for war and likewise see the preparations and capabilities of other states as potentially threatening to their existence) states will seek to maximize their relative power.

Whether that view is cynical or astute depends on your own biases, but I found Measheimer's arguments well founded and well supported, with a rich analysis and historical backdrop that will make the work entertaining even if one doesn't accept his theory in whole. Indeed, while I think offensive realism has real merit as a theory for understanding international politics, I also think it omits some key factors, such as human psychology and moral influence (moral in the sense Sun Tzu meant the word, not simply in terms of right and wrong).

For me, I think Measheimer captures the essence of a very real pattern underlying geopolitical logic, but that this could only be one of multiple dimension in a more complex multi-stable picture. In any case, this book is meaty, well written, and well structured.

The narration is also quite good.

Not dated at all

I was originally worried that the analysis wouldn't stand the test of time before starting the book. It's still relevant and has aged well

Mearsheimer's description of offensive realism and its ramifications remains thoroughly convincing, even if his central point is clinched early in the book. The majority of the book is dedicated to presenting modern history through a realist lens. His goal is to illustrate that throughout modern history state's interactions are largely consistent with the predictions of offensive realism. He does this convincingly.

Realpolitik: refreshing in its honesty

I read Mearsheimer's "The Great Delusion" which is why I read this one second. I found the Great Delusion to be refreshingly clear-eyed and informative. The Tragedy of Great Power Politics is, however, an effort to simplify great power actions by their set-pieces as if each move leads to another. It's good knowledge to have although not surprising.

Well written, nicely read a bit repetitive as is usually the costume in this kind of subject.

A little out dated. Somewhat repetitive.

To be fair, this is an analysis of geopolitics. It's more like a collage course i.e. Geopolitical events in the 90s and early 2000s 101. I think there is more current and relevant information out there.

I appreciate the authors sober analysis of geopolitics. A great read, I would reccomend this book.

The author is one of the most important scholar in the academic field of international relations. This Book is a 'must-read' for all people who want to learn the basic ideas and theories of IR. The author describes especially the Realism school of thought.