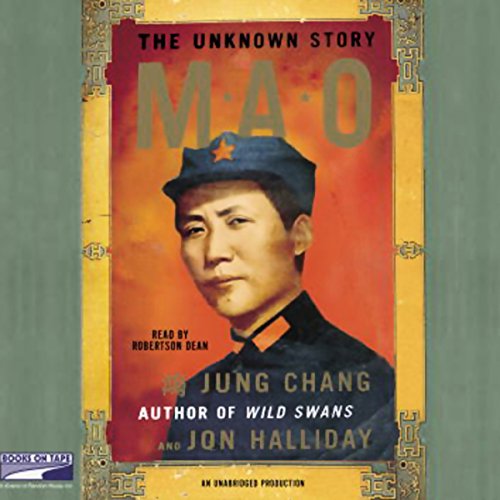 “Ever since the spectacular success of Chang’s Wild Swans we have waited impatiently for her to complete with her husband this monumental study of China’s most notorious modern leader. The expectation has been that she would rewrite modern Chinese history. The wait has been worthwhile and the expectation justified. This is a bombshell of a book.” (Chris Patten, the last governor of Hong Kong, in The Times, London)

Based on a decade of research and on interviews with many of Mao’s close circle in China who have never talked before - and with virtually everyone outside China who had significant dealings with him - this is the most authoritative life of Mao ever written. It is full of startling revelations, exploding the myth of the Long March, and showing a completely unknown Mao: he was not driven by idealism or ideology; his intimate and intricate relationship with Stalin went back to the 1920s, ultimately bringing him to power; he welcomed Japanese occupation of much of China; and he schemed, poisoned and blackmailed to get his way.

After Mao conquered China in 1949, his secret goal was to dominate the world. In chasing this dream he caused the deaths of 38 million people in the greatest famine in history. In all, well over 70 million Chinese perished under Mao’s rule - in peacetime.

Combining meticulous research with the story-telling style of Wild Swans, this biography offers a harrowing portrait of Mao’s ruthless accumulation of power through the exercise of terror: his first victims were the peasants, then the intellectuals and, finally, the inner circle of his own advisors. The listeners enters the shadowy chambers of Mao’s court and eavesdrops on the drama in its hidden recesses. Mao’s character and the enormity of his behavior toward his wives, mistresses and children are unveiled for the first time.

This is an entirely fresh look at Mao in both content and approach. It will astonish historians and the general listener alike.

"Chang and Halliday cast new and revealing light on nearly every episode in Mao's tumultuous life…a stupendous work and one hopes that it will be brought before the Chinese people, who still claim to venerate the man and who have yet to come to terms with their own history...." (Michael Yahuda, The Guardian)

Enjoyable even for someone like me who knew NOTHING about Mao or China prior to diving into this book. The book is lengthy and I have to admit that I did zone out in a couple places but this in no way detracted from my enjoyment or understanding of the story. There's a lot to take in here, but rather than being daunted by the length and detail of the book, I would highly recommend giving it a listen and taking in what you can.

I find this book fascinating, because it is detailed and complete. I am an American and a friend of the late Helen Snow, have lived in China off and on for many years, and am knowledgeable of China's recent history,culture and some of the players. This book answers many questions I have had. The only problem - and it is disturbing - is the narrator. His pronunciation of the Chinese names is so far off the mark that I had to stop now and then to ask myself, "who is he talking about?" Or I would find myself thinking, "Oh, he means ___" This is disturbing. Even though many non-Chinese liseners might not know the difference, it is such a fine presentation, backed by years of painstaking research, the narration is irritating, and falls short in this one area. It seems important to me that the narrator know how to pronounce the names of the recognized leaders of modern China. But this is the only limitation I find- I am listening slowly to get every word! Thanks!

Forget everything you learned in school about Chairman Mao! This book corrects countless misconceptions and reveals the unvarnished truth about one of the most evil leaders in world history.

The Missing Manual for China and Chinese

In 1998 I started reading 2 books on Chinese History or Chinese Cultural per year. For a long time the only affect seemed to be that I usually knew more Chinese history than almost all Chinese under about 55 (and quite a bit less than many over about 65). It didn’t even endeared me to Chinese; it was much more likely to lead to arguments about revisionism, often devolving towards the absurd.

If you read both books back to back and then try to fuse the insights you’ll understand most of Chinese history, a lot of Chinese Culture, and a great deal more than you did about modern Chinese.

Notes:
1) IMHO this book is better than Wild Swans.
2) I have trouble recommending this book to others as strongly as its actual impact, because it’s such a painful reed.
3) Both Genghis Khan and Mao conflated history and propaganda to an extent that most of the rest of the world cannot. Although Genghis Khan may have believed in secret non-propaganda histories for their strategic value.
4) I think the first step in understanding these two books is to embrace the More is Different principle. All peoples, cultures, and governments have their moments and their dark sides, but orders of magnitude simply matter. Some numeracy with respect to scale is required to even start to understand.

There is nothing more criminal in butchering a good book by a lousy reader. The narrator couldn't pronounce a single Chinese word properly, it is so hard to follow sometimes when you have to think twice who the heck he is talking about. Like "Zhou Enlai" was read as "Chao" that's so wrong, it should be more like "Joe" and "Chiang" was read as "Chang" so it gets really confusing. Even as simple as "Jiang qing" was read as "Jiang King" and I won't even start with places. That's another disaster to listen to.
Long and short of it, the book is good, I like the detailed insights and story, but the narration gets into my nerves. Sorry. my rating is Story 4 stars and Narration 0 stars (If I could).

What other book might you compare Mao to and why?

Wild Swan. Book is written by the same author and goes along the same format. I like it.

Learn how to read Chinese pinyin first before recording the book.

Could you see Mao being made into a movie or a TV series? Who should the stars be?

Please make sure the book reader knows how to pronounce chinese words before reading the book.

Frightening but worth the listen

If anyone ever tells you they think Mao is a person to look up to you might want to think again about that person. Mao was a total despot and one of the worst people to ever live. The things described in this book are frightening. It puts a lot of history into context, namely Korea and Vietnam and how this guy used those wars for only personal gain, he didn't care how many Chinese or others died. Not to be listened to with the kids, but excellent if you want to learn history and thus not be doomed to see it repeated.

The book is marvelous. The narration is appallingly bad. There are so many mispronunciations of Chinese and Vietnamese personal names that it's hard to believe this narrator has every listened to international news.

Well worth the time

This is an amazing book. It gives you an entirely new perspective on China. Mao's leadership was horrendous. It is hard to conceive of anyone with less concern for human life and suffering. I came away from the book with the realization that China be a much greater economic threat to the United States today if it had not been victimized by Mao.

One cannot say that one enjoys this book. It is a book of the destruction of very many lives, and disrespect of what many readers may hold dear. Reader beware. But it is well written and tells the story of a powerful man in world history.

This is less a biography and more of an op ed attempting to portray Mao as evil. No nuisance, or even remotely a kind thing to say about Mao in 29 hours. Basically, this book exists as propaganda to attempt to distort Mao's (often controversial) legacy.

I'm surprised the authors didn't also blame Mao for AIDS, California drivers and the Game of Thrones finale while they were at it.

i should have researched the book before buying

The authors are simply not trying to be objective. The whole book seems more like a polemic answer to the other end of the spectrum. Using the term "Chinese kgb" instead of smth like "Chinese Secret police" already does it for me. The authors argue that the name of the organisation has changed to often that this is simpler. When talking about the Soviet side though, the accurate term of the time (e.g. nkwd) is used. Seems to me they purposefully used a symbol laden name (kgb) to paint it negatively. As if the actions of the actual thing weren' t bad enough to do that. Things like that immediately made me think that there is an agenda to the book. It is also very simplistic in its reasons for Maos behavior. After reading academic reviews, it furthermore turns out that they actually made false claims, took citations out of context and grossly distorted evidence. I cannot recommend this book.

Everyone should know the true story of Mao. Writen in great detail based on astonishingly revealing research. Very well narrated.