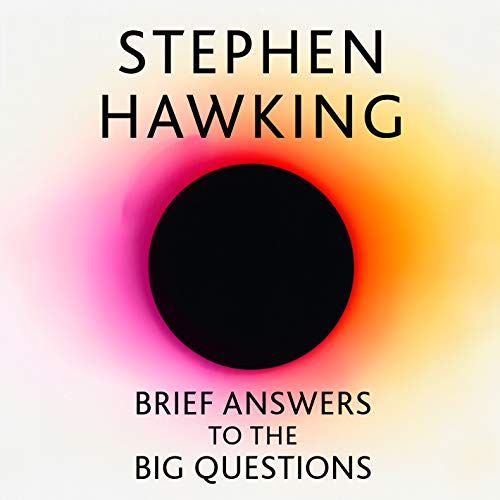 Brief Answers to the Big Questions

Read by Ben Whishaw and Garrick Hagon, with an afterword read by Lucy Hawking.

The world-famous cosmologist and number one best-selling author of A Brief History of Time leaves us with his final thoughts on the universe's biggest questions in this brilliant posthumous work.

How did the universe begin? Will humanity survive on Earth? Is there intelligent life beyond our solar system? Could artificial intelligence ever outsmart us?

Throughout his extraordinary career, Stephen Hawking expanded our understanding of the universe and unravelled some of its greatest mysteries. But even as his theoretical work on black holes, imaginary time and multiple histories took his mind to the furthest reaches of space, Hawking always believed that science could also be used to fix the problems on our planet.

And now, as we face potentially catastrophic changes here on Earth - from climate change to dwindling natural resources to the threat of artificial superintelligence - Stephen Hawking turns his attention to the most urgent issues for humankind.

Wide-ranging, intellectually stimulating, passionately argued and infused with his characteristic humour, Brief Answers to the Big Questions, the final book from one of the greatest minds in history, is a personal view on the challenges we face as a human race and where we, as a planet, are heading next.

incredible explanation of the fundamentals and vision for our world, told by examples. Wonderful ! Thanks Stephen Hawking, one of the cleverest man in the beginning of XXI century.

It is more of a vulgarisation book. For someone who has read a lot of vulgarisations works it sounds repetitive.

interesting but not deep enough

it goes through many ideas without to deep in any... that felt odd, I wish it was longer...

Loved it. I thinks this is a must read for adolescents and anyone who aspires some common good sense.

Over the years Stephen Hawkings books have accompanies me on travels or as in this case on long walks. The subject matters were invariably difficult and at times daunting. In this book its the same, but more so. The bigest questions possible and still more than worthwhile. It is impressive to hear how well thought through and clearly stated Prof. Hawkings manages to argue and develop his answers to the questions. The relative brevity in answering the questions, in about half an hour a question, suggests a long preparation in making the case simply, and it makes the book digestible also for an average reader. A realy enjoyable and worthwhile listening and with a sad note, this being the last helping hand Stephen Hawking could give. It is a big help.

A great read (listen) if you wanna get what’s the deal with literally everything.

The book is a fascinating window into science through the words of the scientist himself. A lot of interesting starting points to read more about AI, space, genetics and literary everything!

Perfect pick as my first Hawking's book.
Great performance and very understandable for a young adult.

I don't have a long attention span so at times I had to rewing a minute to grasp the concept but I enjoyed 100% all of the book.

By the end I was marveled at Stephen Hawking's wonderful empathy and capacity.
Hawking's name is a household term and even though I knew of him, his absence never hit me until now. I couldn't but shed a few tears after having known what a great human being we lost 3 years ago.

Marathoned in one sitting

I'm just really glad I get to be alive at this particular time when I get to learn about the universe from Hawking and people like him. I love this stuff, and this book is written accessibly enough that even I don't have trouble understanding the material (which I would in a school setting). It's inspirational, calming, and existential crisis-worthy at the same time. Wonderful all around.

An amazing book. Worth every minute of listening

It takes genius to explain a complicated subject in such a simple way.

I didn't even know it will spark so much interest in me in cosmology and our universe. Totally recommend 👌

Good teaser but not enough depth for me

It''s a nicely written book but really just a teaser. Great if this is the first book about scientific topics you are reading but otherwise it doesn't provide enough meet on the bone.

Loved to hear the opinions of one of the brightest minds of our times. The historical context of some theories is interesting as well.

Even though intricate nuances of Physics is bit challenging for a business graduate finance geek, I throughly enjoyed this book and many of the big question discussion. The parts I couldn't grasp does not bother me much as I am way too grateful for the parts that I did understand. Highly recommend this book as worth every penny.

Although my scientific background in terms of cosmologie and space sciences is limited, I managed to keep up with the pace of the book and the theories Stephen Hawking illustrated. What I liked the most is his unlimited imagination and strive for new explorations and how he uses science to back it up. As a believing muslim who believes that God created universe and existed before everything else did, I found it interesting to hear from a scientific perspective how the universe could have come into place. Stepehen still kept the question open, wether God exists or not but I think a lot of his arguments and theories actually prove his existence. In general a very interesting and exciting book to reas with a lot of revolutionary ideas !

What a delightful experience is to be in contact with this book! Thank you Stephen Hawking!

Loved it... His story is so remarkablyy fascinating. Hawking is a true inspiration for me

I imagine this, Stephan Hawking‘s last written piece, to be intentionally his parting words. He says himself that it’s an optimist‘s warning to mankind - watch out or we’ll make ourselves extinct - while giving us a kid‘s eye view of a bright future. For any curious person highly recommend.

The book “Brief answers to the big questions” is a brief overview of Mr. Stephen Hawkings’ work, it’s insightful for scientists and interested individuals, and written with an incredible sense of humor.

He’ll certainly inspire generations to come, and credits the teachers, that he says spark the interest for most breakthrough discoveries.

His advice in the end of the book is empowering and includes a touching afterword by his daughter.

What a blessed family. Or rather, what they chose to make of it.

I definitely recommend this book to read or hear - the audiobook version features his characteristic voice for some of the brief answers he gives to the big questions.

It was really interesting and impressive.
Although I'm not an native English speaker I understood the most of it and for almost everything else, I was able to understand it in context.

Great content. I love the tone and the explanations as well. but first thing the attitude and content is great