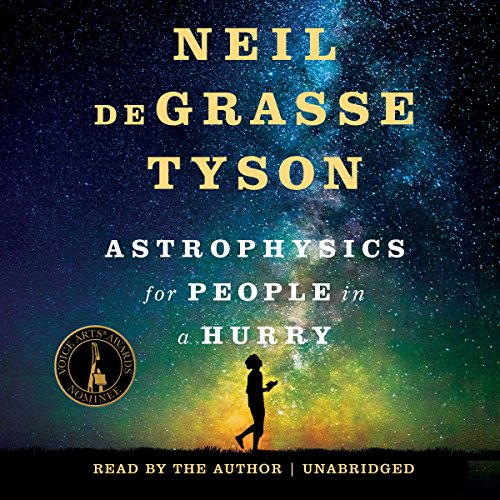 Astrophysics for People in a Hurry

What is the nature of space and time? How do we fit within the universe? How does the universe fit within us? There's no better guide through these mind-expanding questions than acclaimed astrophysicist and best-selling author Neil deGrasse Tyson.

But today, few of us have time to contemplate the cosmos. So Tyson brings the universe down to Earth succinctly and clearly, with sparkling wit, in digestible chapters consumable anytime and anywhere in your busy day. While waiting for your morning coffee to brew, or while waiting for the bus, the train, or the plane to arrive, Astrophysics for People in a Hurry will reveal just what you need to be fluent and ready for the next cosmic headlines: from the big bang to black holes, from quarks to quantum mechanics, and from the search for planets to the search for life in the universe.

It's very informative and also you don't have to be an astrophysicist to understand what's being talked about.

One of the best books I've read since a very long time. It made me lose myself in toughs with every other sentence. Plus NdGT's voice is perfect for this...

Enjoyable - not as understandable as I had hoped

Always watch Neil deGrasse Tyson when he is a guest on a late night talk show. The 10 minute segments always seem so easy to understand. This book, though, is way past my scientific knowledge and there is not enough &amp;quot;simplification&amp;quot; in his explanations. Many parts are still very interesting, but this is one book where having some science in your background will be very helpful.

Arrogant in my opinion

I used to think a lot about Dr. Tyson... but after the last chapter this book got old. He basically called anyone who hasn't dedicated their life to science "inconsiderate". That's my take.

In addition, the book seems to cover more of what we don't know, versus what we know. And how much we assume to know that there isn't any proof of.

I have enjoyed so many other books on the topic, and it's nice to dwell upon the infinite, but find another book for that.

Awesome book for those new to astrophysics.

Would you listen to Astrophysics for People in a Hurry again? Why?

YES!! I learned so much the first go around, but even then I had to have him repeat things a few times for me to fully grasp some of the concepts. So I would most definitely listen to it again, because I believe their would be something new to takeaway each time, whether it be knowledge or perspective.

What other book might you compare Astrophysics for People in a Hurry to and why?

Cosmos, by Carl Sagan. The audiobook is excellently narrated by LeVar Burton, and I find it to be just as "down to earth" as this one is. Little to no math, but explaining detailed concepts in a way we, those bad at math, can understand.

Probably the scene with the whipped cream in the coffee shop. Don't argue with Neil deGrasse Tyson about physics, he will win.

No, I had to take it in bits and pieces, and feel that I enjoyed it more that way. Some of the things said challenged my world/universe view a bit, and I found it helpful to just have time to ponder and be wowed by the universe.

I would highly recommend others to read/listen to this, especially if you are curious about Astrophysics, but are intimidated by the math. Neil deGrasse Tyson has a way of explaining difficult concepts in a manner that is easier to understand than others I have found. This book has given me me a great platform of knowledge to build upon, and I learned an incredible amount. It even helped me have the confidence needed to answer a question I was asked shortly after finishing. I couldn't help but holler, "I know this! I just learned it from Neil deGrasse Tyson!"

I was expecting something more... It's basically a shortened version of what you can hear in Tyson's podcast. I was expect some extra details.

Disappointing - not much physics

I was hoping for an entertaining, lay person's overview of quantum theory, the Standard Model, string theory, etc. This book doesn't even touch on astrophysics. There is a little discussion of dark matter and dark energy, but this book is more about the history of astronomy, how the planets were named, the relative prevalence of elements in the universe, how aliens might discover our radio transmissions, and other non-physics stuff.

From The Department Of Exotic Happenings...!

Yes! We are all stardust!
Only the truly knowledgeable might not like "Astrophysics for People in a Hurry." I'm sure they're into much more in-depth works. But for those of us who dream up into the sky, it's a pure delight. Heck, even the knowledgeable might like it as Neil deGrasse Tyson is the best narrator out there, one of the best writers there is. Period.
Filled with wonderful ideas, galaxies devouring dwarf galaxies (ooh, bad karma!), massive radio telescopes, a fun run through the periodic table of elements, comets, a study of time, so much is packed into just over 3 1/2 hours. Yes, you do come out wanting more, more info, more ideas.
More deGrasse Tyson! Only he can make the strange ominous on one hand, fantastically enthralling on the other. Only he can make comparisons that are laugh out loud funny on the one hand, complete and utter poetry on the other.
Worth the price, worth the woefully short time, you'll be engaged and smiling the whole way through all these well-written essays that'll have you looking up at the sky again, fascinated, laughing in your heart and soul. Maybe you'll lose sight of the vast, vast, oh so vast picture, but you'll be delighted by the many small and provocative wonders you're left with.

Not as meaty as I’d hoped

Well narrated. I’m going to listen again.
Has some political pushing in it which is annoying. But I just wish it had been slightly more educational

Arrogance for People in a Hurry

Regrettably, Tyson's conceit in the final chapter that starving children and worldly hardship matter little in the grander scheme of the cosmos (and that the cosmos are more deserving of our attention), stands out as the most memorable takeaway in this otherwise sometimes interesting, but just as often condescending survey of astrophysics. The fact that the author seems blithely unaware of his own conclusion makes it all the more troubling.

Same good deGrasse Tyson presentation. Great for those fans of Neil or those light on cosmic knowledge. Others will find it a bit too fluffy.

indeed for people in a hurry

Astrophysics explained in a way it's easy to understand. Ocasionally you get the expression, Tyson is a bit full of himself. He shows some disrespect to people working in other fields of expertise or are happy with a simple life.

The headline is a tease …

… which the book does not live up to. I have studied Physics, albeit some decades ago and wanted to see what is new. “In a hurry”implied - at least for me - some form of deeper explanation, so that the presented material can make sense. Rattling down information without context makes no sense, so I gave up half way through. He has been better other times.

This book gives you a nice overview about Astrophysics. It’s easy to understand. You learn about the universe and what is in it.

A great read of a great book of key themes from astrophysics, for beginners.

Astrophysics at my fingertips

Loved it and can only recommend this audiobook to everyone with a curious mind and the attention span of a kid.

Wonderful book which nicely summarizes crucial concepts about our world/universe. The Neil’s reading performance is also top notch. We are blessed to have such scientists who can explain things in east to understand manner.

I understand Neil deGrasse Tyson's voice annoys some people, but if you come to accept its hokiness, you may go on, as I did, to admire his zeal for education and astrophysics.

He has a relaxing deep voice very nice to listen, I can recommend that one to all that look up in the night sky from time to time