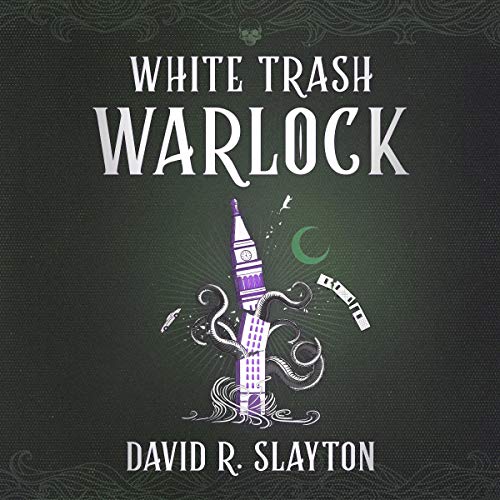 Not all magicians go to schools of magic.

Adam Binder has the Sight. It’s a power that runs in his bloodline: the ability to see beyond this world and into another, a realm of magic populated by elves, gnomes, and spirits of every kind. But for much of Adam’s life, that power has been a curse, hindering friendships, worrying his backwoods family, and fueling his abusive father’s rage.

Years after his brother, Bobby, had him committed to a psych ward, Adam is ready to come to grips with who he is, to live his life on his terms, to find love, and maybe even use his magic to do some good. Hoping to track down his missing father, Adam follows a trail of cursed artifacts to Denver, only to discover that an ancient and horrifying spirit has taken possession of Bobby’s wife.

It isn’t long before Adam becomes the spirit’s next target. To survive the confrontation, save his sister-in-law, and learn the truth about his father, Adam will have to risk bargaining with very dangerous beings...including his first love.

REVIEW- White Trash Warlock by David R Slayton.
-
White trash warlock immediately envelopes you into the story and doesn’t let you go for even a second through the whole ride. I listened to this on audible and the narration was perfect. White Trash Warlock follows Adam Binder who is a witch. When his Non magical and non believer of a brother calls him and asks him to come help, he knows something big is wrong and must go to help.
-
This book delivers quite a few things I haven’t seen yet in queer fantasy.
1. A very relatable trailer park MC.
2. A great brother dynamic.
3. Details that are always tingling all your senses.

My only cons are that sometimes it was slowed down by all the details given, and I know some people might not like the portrayal of cops in this book since one of the characters is a cop. I didn’t find the cop portrayal as bad, but I’m also a sheltered white boy, so take it with a grain of salt.
-
This book is a solid 4 for me and you can see my ratings meaning below. vvv
-
5-shout it from the rooftops.
4- actively share it with folks.
3- solid book. Would recommend
2- probably wouldn’t recommend unless someone was looking for something specific.
1- probably dnf’d or HATE IT.

A Tale That Takes You Out Of This World

So, I'm a landscaper. I was doing a rock project for three days, with all the accompanying physical issues: sore back, achy hands, fall-down-flat weariness.
I'm telling you this so that when I say that this story kept me engrossed and thoroughly distracted during the work, you understand how impressive that is. The story, with clever takes on existing tropes and compelling characters, is a treat!

An excellent weaving of fantasy and reality!

I really enjoyed this story. You could tell that the author had spent real time in the setting and was able to weave that seamlessly into fiction, something that is not always easy to achieve. I grew up in Denver and could picture everything so clearly! That alone of course is not worth 5 stars but the characters were also relatable and the storyline was believable and immersive. I particularly enjoyed the main characters and their conflicts. They were real and accurate, I don't want to give anything away but so often when there is drama or angst or miscommunication in a fictional work it is overdone and could usually could be solved with a simple conversation or it's blown way out of proportion. I also really appreciated the authors take on the classic lore, he made it his own while managing to stay true to the core of the mythology. All of that makes for an enjoyable story but I think what I appreciated most was that the story was about the people and their experiences not the sexual orientation of the main character and all the sex that fills a lot of LGBT stories. I like being able to read about characters who are like me but I want a good story that I can escape to (not a smut novel) and this book did not disappoint!

no joke wana of thee best books ive read for a very long time...….I admit I enjoy the trashy mm romance, but my biggest complaint is that no matter how much experience in writing or research an female author has or gets, you can ALWAYS tell its a woman who wrote the book, ive read a ton and literally NO female author EVER gets it right, no matter what pen name they use, they are no male, and you can tell by how they write the male characters no matter how much potty pillow talk they use the don't get a guys reactions to certain situations, they don't get a guys pride or stubbornness, or downright masculinity, so it was a absolute JOY to read this book, to the point where I think im gonna only read mm stories if they are written by real gay men...… and yes we CAN tell the difference. Thank you David Slayton, you are my new fav and hero!!!

O GOD IM GAY AND I HATE GUNS ya thats basically the book
no one wants to hear about how gay i am and how much i hate guns and how mean straight people are . I made it 7 chapter's in and that is it. its sad it could have been a great book about simply being a witch and being a little different. but it's a im a victim got old within three chapters . my guess is the person that wrote this book has zero clue about how much of rural America feels about anything. and really doesn't give a crap.

This book/series was just what I was looking for. This story must be continued! I burned through both books in one weekend, seriously thinking about starting a relisten (yes they were that good). Two credits well spent.

Adam has had a very challenging life with an abusive father, getting committed by his brother, and unloved by his mother, oh, and he's gay. To save his estranged brother's wife, he travels to Denver and encounters an evil presence beyond anything known to man or the magical beings who inhabit it. The worlds are well developed and the action is relentless. Adam needs to rally all his resources to face this impossible foe.

good but not enough

I enjoyed Adam's over all journey but I felt like adam was tired, drained, apathetic or nonchalant thoughtout the story or maybe that's just how the narrator sounds? idk, I left disconnected with characters and there was no sense of urgency with the pending doom looming over them and no clear justification of the characters actions. i felt like all the characters are just seemed annoyed being in the book. all plot points connects in the end but I felt cheated and it felt emotionless.
over all I though the story was good but it could use more emotions and character development. like if my brother committed me to a mental institution I would have been so furious but in the book there was no huge emotional outburst and the book didn't give a big reason for Adam to help bobby. there was no brotherly revelation or coming together everything just felt dull. but I feel hopefully and will definitely pick up the next book to hopefully see more characters development because it's definitely there.

all signs point to Denver...

Adam Binder has had a tough life. Seriously, he grew up in a dysfunctional, abusive home. His father abandoned them and no one understood Adam’s gift. Imagine growing up gay, poor, seeing things that aren’t real, and being able to feel everyone’s emotions. Adam is an adult now, and his past has shaped him. He is on a quest for answers, and urban fantasy fans are going to love him.

Adam has the sight, a gift that allows him to see/feel magic, fairies, elves, gnomes, dragons and more that exist outside of our realm. He can also sense people’s feelings from sorrow to fear. This made things difficult for him as a teen, and his own brother institutionalized him.

He now lives in a trailer park with his Aunt. His Aunt has the gift and accepts Adam. He hasn’t spoken to his brother Bobby in years, which is why he is surprised when Bobby asks for help. It seems something is very wrong with Bobby’s wife (understatement of the year). Adam gets in his old Cutlass and heads to Denver.

I loved how this tale unfolded. Slayton filled us in on a need to know basis, giving the story a pleasant flow. Truth be told, Adam doesn’t know a lot about himself, which is why he is tracking the warlock making these magical items. As luck would have it that lead also points to Denver.


Trips to the spirit world, fairies, gods, reapers and more await you in this tale with its Supernatural and old-school vibe. The writing is vivid, suspenseful, and balanced against Adam’s dysfunctional family. Secondary characters from the gods to family were unique and developed. I am very interested in some key players in the other realm. Can I just say I loved Vic and hope for more?

There is some romance both past and present, and it was interesting witnessing the present and learning about the past. Adam’s concerns and emotions felt raw and genuine. This added depth and severed as a side dish to the malevolent spirit trying to enter our world. It was all quite clever.

The second point of view is that of Adam’s brother Bobby, who prefers Robert. He worries about his social status and has worked hard to leave the smudge of rural Oklahoma behind. He was complex, and over the course of the story we learn a great deal about Robert and what makes him who he is. I loved seeing strides made to heal the family dynamics, and the author did a stellar job of showing all sides.

I listened to the audiobook narrated by Michael David Axtell, who brought these characters and their emotions to life. He assigned unique voices to everyone. His voices for Adam captured our young protagonist from insecurities to benevolence. He enhanced an already brilliant story.

_White Trash Warlock_ by David R. Slayton receives four stars from me. I found the novel rather pleasant and at times really very interesting and gripping.

The novel is read by Michael David Axtell, and his reading was excellent. I felt he brought the people to life, and added a lot of color. He has good distinctive voices. I recommend him as a reader.

What I liked: I liked the journey the character is on, and I liked the outcomes. It was a satisfying novel in that respect. There are scenes with elf queen that I really enjoyed. I enjoyed her questioning him; the way she treats him; the way she gets him to look into himself. I hope as the series progresses there will be more to their relationship. At this point, it is how it should be with her in power and he being subservient to her. However, in those scenes where she talks to him, she seems to treat him respectfully, which I found very important and attractive. I think she by the way she treats him, he builds in confidence. (although I'm not sure I can point to the text to defend that, it is more of my feeling).

This is an urban fantasy, and a good novel for someone who is interested in that genre. It has has good LGBTQ characters, which is always nice for me.

Recommended: yes, its a fun book, with a lot of emotional appeal.