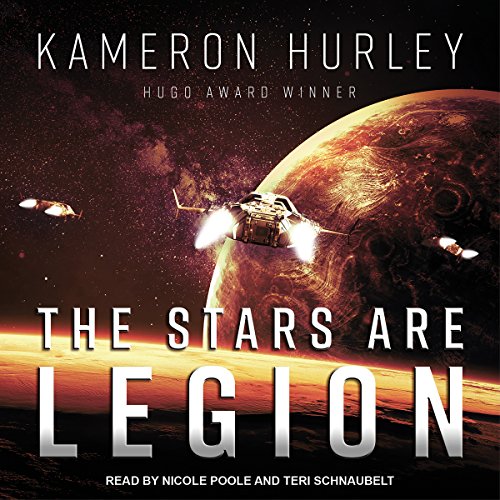 The Stars Are Legion

Somewhere on the outer rim of the universe, a mass of decaying world-ships known as the Legion is traveling in the seams between the stars. For generations, a war for control of the Legion has been waged, with no clear resolution. As worlds continue to die, a desperate plan is put into motion.

Zan wakes with no memory, prisoner of a people who say they are her family. She is told she is their salvation - the only person capable of boarding the Mokshi, a world-ship with the power to leave the Legion. But Zan's new family is not the only one desperate to gain control of the prized ship. Zan finds that she must choose sides in a genocidal campaign that will take her from the edges of the Legion's gravity well to the very belly of the world.

Zan will soon learn that she carries the seeds of the Legion's destruction - and its possible salvation. But can she and her ragtag band of followers survive the horrors of the Legion and its people long enough to deliver it?

In the tradition of The Fall of Hyperion and Dune, The Stars Are Legion is an epic and thrilling tale about tragic love, revenge, and war as imagined by one of the genre's most celebrated new writers.

"This gripping book is both hard to read and easy to appreciate." ( Publishers Weekly)

Ohhh... All the Body Fluids

Leckie's Ancillary series is a recent favorite of mine, and if you like those books, then there are plot conceits and themes this story has in common with "Ancillary" that you should find interesting. Every character identifies as (and is biologically) female while the protagonist struggles to understand her purpose and identity itself. The fundamental difference between "Legion" and "Ancillary" is the former's throbbing, "organic" universe compared to the "artificial" element to the latter's machine-assisted existential origins.

The world-sized "ships" in "Legion" and their inhabitants are fleshy things that excrete blood, mucus and feces at the slightest provocation. Why the author chose to slather almost every paragraph with so much bile, intestines and afterbirth is not completely understood by this reader. The important themes and a realistic topography could have been conveyed with less than half the gore.

It's not that the blood and guts are hard to stomach (which some readers will struggle with) but that the descriptions of puss, cancerous sores and shit are just so repetitive. Perhaps it's necessary constantly be reminded of the relationship between human and ecological bodies as systems through this scaler extrapolation? It certainly caused this reader to think about the relationship between biology, creation and determinism, but that may just be one person's projection? Plus, this is what good story telling can and should do, so while I'm wary of the necessity, there is a purpose being served through the muck.

The political story and basic plot points are built upon multi-layered betrayals and motivations. This makes the characters interesting, if a bit unlikeable. But the protagonist's journey and development are compelling enough to propel the story.

There's little science in this fiction and none of the bizarre forces and "technology" at work here are given even a perfunctory hand-waving. Fans of military, hard or even heavily abstracted sci-fi may be disappointed by the fantasy-in-space feel. The word "magic" isn't used, but the monsters and physical forces at work in this universe are deeply fantastical. But genre non-purists, especially those that factor diversity and convention-busting gender explorations should enjoy many of the ideas and characters presented in "Legion".

I may not be extremely attracted to the ever-increasingly explored themes in "Legion". Yet, to Hurley's credit, the author manages to cut through the tonnage of gore to present ideas that matter with characters that can be cared about.

Oh, a final audio-only comment about the book; the narration by both performers is excellent. I will look for stories featuring these narrators again.

Kameron Hurley has quickly become one of my favorite contemporary authors. Her books are filled with original storylines, strong female characters, and a much-needed feminist perspective in the genre. Hurley has managed an intriguing story and an immense undertaking at world-building so intrinsically enmeshed withing the story there is no separation of the two. I simply can't wait to devour more stories from this author. Thank you, Ms. Hurley!

The Stars Are Legion by Kameron Hurley offers an intriguing slant to a universe operating under different rules. A population of humanoid-like entities, all of which identify as exclusively female (although why sexual identity occurs when there isn't more than one sex is never explained). The entities live on multiple world ships that are quasi-organic and have evolved distinct societies that are competing with one another for either overall control or resources to leave the legion. Two women have a plan for gaining the upper hand (and there really is a hand or arm to gain) over two particularly powerful cliques fighting to gain control of the former out-of-commission flag ship of the force.

Most of the sci-fi elements involve the massive worldships where everyone lives. The texture of the environment is biological with all sorts of human-like fluids oozing and percolating about. In addition, although there is sexual behaviors, women become pregnant randomly without any specific action on their part. In addition, they birth a variety of things that the world decides it needs (the odd gear or cog for example). The mystery of the tale is that one of two main plotters has lost her memory, ends up being recycled into the ship and reprises a journey from the deepest bowels (literally) back to the surface, collecting an odd collection of misfits along the way. There is constant betrayal, along with lots of battles and fighting, adding to the natural gore of the place. There's the distinct sense that the worldships were envisioned as a metaphor for current society.

The choice to employ two narrators was a wise decision as the story flips back and forth between the two main characters and their unique perspectives and motivations. Both narrators perform an admirable job with excellent character distinction by each. While the story itself drags a bit (there are so many levels to climb), the pace and mood were nicely aligned.

A truly amazing and original book!

Kameron Hurley has done it again! Another innovative sff novel that is gripping, emotional, and just plain awesome!

The story is great (and a bit weird at first) and the narrators are just perfect.

I can’t imagine how Hurley came up with this story. It is the craziest space adventure story I have ever heard. The twists it takes you on are plenty and sometimes a little to drawn out but I couldn’t stop listening to it. I fell in love with the characters and the story. Give it a try.

If you liked Dune, and if you really liked The Broken Earth trilogy, you will very likely feel at home with The Stars Are Legion. Unfamiliar worlds, mysterious plots, and agents of destiny lie ahead. The narration does not always do the story justice, as the speakers can be quite flat at times, particularly the reader for Jayd. That said, this one is still worth your time and your ears!

I've followed Hurley since she started and she's one of the great worldbuilders, up there with Sanderson and N.K. Jemison. This one made me sit and ponder so many times trying to both figure out the world and being fascinated by how much sense it made while still being entirely alien. The storyline is not formulaic, even though that could have been fine in the setting but the ending subverted my expectations while still being entirely consistent. I loved it. I wish it were a series.

A good story. maybe one to read as opposed to listen. I struggled to keep it all straight.

Not bad but not amazing

If you liked the movie “Memento” then you’ll probably like this book because you never know what’s going on or why at any given time. It’s interesting, and certainly unlike anything else I’ve read, but just not for me, and I say that as a huge sci-fi/fantasy fan. After 11 hours of listening I was really hoping for a more satisfying ending but I was just left with this feeling of “so that’s it?”. And side note, for any other queer folks out there thinking of giving this a shot because you read that there’s a f/f relationship: eh....kinda. Not really. It’s implied that there’s feelings between the two but it pretty much ends right there.

Narrators were good overall, but sometimes said things with inflections that did not fit the scene.

All in all, I don’t regret purchasing the book because it was very unique, but I can’t imagine ever listening a second time around.

Sorry, the book is read in such a sleepy, boring voice, that it might serve as a lullaby. But there's no way I could finish it. After listening for ~2 hours I realized I had not actually heard anything, just filtered it out as background noise. I might try reading the book eventually, but this recording only helps if you want to fall asleep.