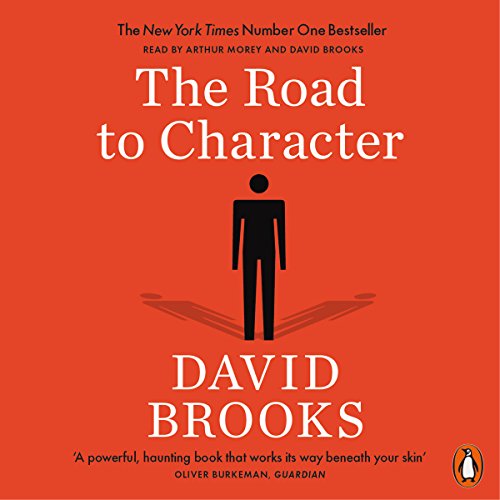 The Road to Character

Penguin presents the unabridged downloadable audiobook edition of The Road to Character by David Brooks, read by Arthur Morey and David Brooks.

In The Road to Character, David Brooks, best-selling author of The Social Animal and New York Times columnist, explains why selflessness leads to greater success.

We all possess two natures. One focuses on external success: wealth, fame, status and a great career. The other aims for internal goodness, driven by a spiritual urge not only to do good but to be good - honest, loving and steadfast. The inner self doesn't seek happiness superficially defined; it seeks emotional commitments without counting the cost and a deeper moral joy. Individuals and societies thrive when a general balance is struck between these two imperatives, but we live in a culture that encourages us to think about the external side of our nature rather than the inner self. We hanker for praise instead of following our hearts, and we self-promote rather than confront our weaknesses.

In this urgent and eye-opening audiobook, David Brooks asks us to confront the meaning of true fulfilment. A famous columnist for The New York Times and a best-selling author, Brooks found himself living in a shallow mode. For years he remained focused on getting ahead and reaping the rewards for his efforts, placing his career before his character.

Finding himself at a crossroads, Brooks sought out men and women who embodied the moral courage he longed to experience. Citing an array of history's greatest thinkers and leaders - from St. Augustine and George Eliot to Dwight Eisenhower and Samuel Johnson - he traces how they were able to face their weaknesses and transcend their flaws. Each one of them chose to embrace one simple but counterintuitive truth: in order to fulfil yourself, you must learn how to forget yourself.

An elegant interweaving of politics, spirituality and psychology, The Road to Character proves that it is how we want to be remembered - and not what we put on our CVs - that truly matters.

All over the place, long and not to the point.

I am not an avid reader, and I don’t read books for their style. I am more squared and like to read books to learn from them. Thats why I like books that are to the point.

At this point I am forcing myself to finish this book. Its just too long and I don’t really get the point. To me, it feels like its all over the place and the point/lesson of the book is not clear.

They actually have the 30minute summery version of this book in audible so I will get that as well so I can connect the dots and understand what this book is trying to teach.

Again, this might be me. I normally can read through books with ease if its to the point but I am struggling with this one and lost interest.

I really enjoyed the book. The book is well researched and at times you can feel the struggle of the characters so well the stories are told. David Brooks can take a whole chapter and at times sum it up brilliantly in one sentence. Definitely recommend it to people who are searching for purpose, the book won't give purpose to you but you will realize that your struggle is real. And if you ever wonder why social media is not your thing, it might be because you are looking for more! Brilliant

Insightful overview of the evolution of character over the centuries

Thoroughly enjoyed the first and last chapters. The middle chapters dragged on for a bit too long.