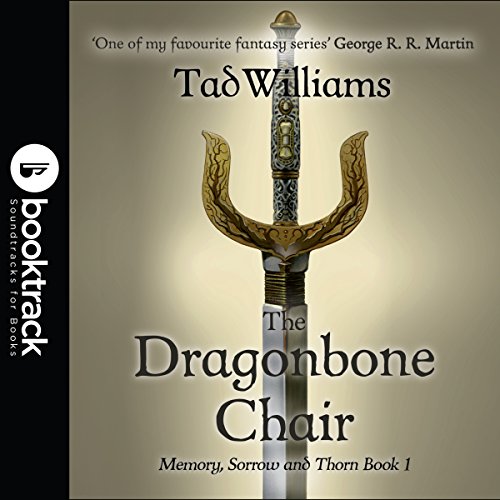 Kitchen-boy Simon is bored, restless and 14 years old - a dangerous combination. It seems, however, that his life has just taken a turn for the better when he's apprenticed to his castle's resident wizard. As Simon's learning to read and write under Doctor Morgenes' tutelage, forces greater than he could possibly imagine are gathering: forces which will change Simon's life - and his world - forever.

Following the death of Good King John, Osten Ard is plunged into civil war as his sons battle for control of the fabled Dragonbone Chair - the country's throne as well as the symbol of its power. Simon is forced to flee the only home he has ever known, a journey which will test him beyond his worst nightmares.

With The Dragonbone Chair, Tad Williams introduced the incredible fantasy world of Osten Ard and kicked off the beloved, internationally best-selling series Memory, Sorrow and Thorn.

I enjoyed this audiobook because the story is intricate and all the characters are well described. However, I have just a small negative comment regarding the book track sound environment. Globally it is very good and makes the imaginary travel in the book easier and captivating, but during a few short passages, the background sound was too loud and did not allow to understand what the reader was saying.

Andrew Wincott is also an exceptional reader. His capacity to impersonate the different characters with so different voices and accents is very impressive. I will certainly buy other audiobooks with him as the reader.

So enjoy yourself if you decide to buy this audio book !

A great start to the Memory, Sorrow, and Thorn series of Tad Williams! The music, sound effects, and ambience made the listening experience more immersive -- felt as though you're in the world of Osten Ard with Simon himself haha. Looking forward to listening to the Booktrack versions of Stone of Farewell and Green Angel Tower! :)

DO NOT BUY THIS VERSION

Sadly this audio book is not done right, there are several times during this book where you will struggle to make out what the narrator is saying, especially in dramatic moments when the music gets louder.

As for the story itself, it's a slow burn but I enjoyed it fine enough. This story won't give you Sanderson levels of action, but it will give you a host of characters who - with the exception of the very clearly evil antagonists - feel refreshingly real.

The narration is fine but not perfect. His different voices are excellent, but there are a few times where he gives off the wrong emotion, for example the text may state that a character says something angrily, but the narrator speaks the words as if surprised or scared. It doesn't happen often, but it does cost him a star.

I recommend the book and the series - but go get the other version!

I've loved this book series since its publication, but as an audiobook, the soundtrack is maddeningly infuriating, and unnecessarily distractive. The narrator by himself would've been more than enough,

This really came through great!

Amazing book and great story. Hands down to the author who did fantastically in writing this book. I wasn't sure at first why I was hearing things aside from the narrator (not sure what to expect when i heard music in the background.) but then as I went on listening, it came together as the addition of the music and background music added impact in capturing the story. It was easy to understand even when I was doing something else aside from listening.

very enjoying and great book. would recommend this to others.

the music and sounds are to loud and not fitting

the music and sounds are to loud. almost drowning the speech. and is not fitting.. fail to give the right atmosphere.
I regret I bought this music version :(

the sounds effects are poorly added, and instead of enhancing the experience are hindering it.
It is sometimes hard to hear or understand the narrator above the music.

Great with one big flaw in the sound.

The story is amazing. The narrator is great. The added sound effects really added to the immersive effect. BUT!!! The background music/sounds were a bit too loud and there was a constant buzzing when they were included. I'm a little shocked they let this go out to the public without checking or fixing it.

I had this book recommended to me as something to follow up A Song of Ice and Fire, and was eager to jump into its world. The narration here is fantastic, and I did enjoy the sound effects, but the story got boring and tropey for me once the main character left the castle. The fantasy story tropes I can understand, given the books are so old, they likely invented some of them and were fresh in their time, but today's audience might not be so impressed. The names of places and characters are difficult to sort out if you find you want to search them up later to find out more about a particular character or race. Hearing them said isn't always going to help you figure out how they're spelled! I've decided not to continue on to the next book, which is sad, because I had really hoped to get into this series. The characters and their plight just didn't grab me, unfortunately.