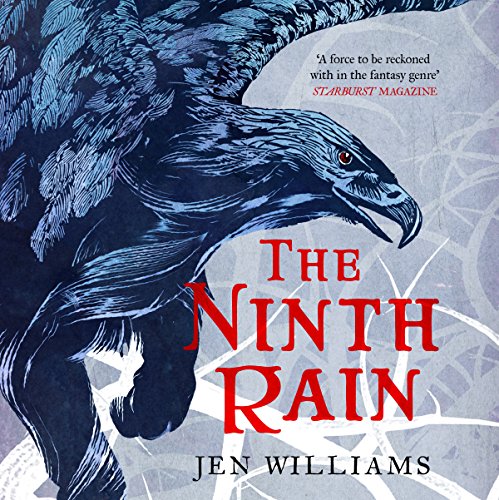 Jen Williams, acclaimed author of The Copper Cat trilogy, featuring The Copper Promise, The Iron Ghost and The Silver Tide, returns with the first in a blistering new trilogy.

The great city of Ebora once glittered with gold. Now its streets are stalked by wolves. Tormalin the Oathless has no taste for sitting around waiting to die while the realm of his storied ancestors falls to pieces - talk about a guilt trip. Better to be amongst the living, where there are taverns full of women and wine.

When eccentric explorer Lady Vincenza 'Vintage' de Grazon offers him employment, he sees an easy way out. Even when they are joined by a fugitive witch with a tendency to set things on fire, the prospect of facing down monsters and retrieving ancient artefacts is preferable to the abomination he left behind. But not everyone is willing to let the Eboran empire collapse, and the adventurers are quickly drawn into a tangled conspiracy of magic and war. For the Jure'lia are coming, and the Ninth Rain must fall....

Brilliant blend of fantasy and SciFi

This was one amazing listen!

Not only do we have a absolutely fascinating new world to explore, with new races, a mysterious sickness, magic, different cultures and just a really deep and multi faceted world building. It feels so three dimensional it's almost eery!

So often worlds feel a bit like a theatre screen in front of which the story takes part - not so in The Ninth Rain. I felt like I could lift every stone and peek behind every tree, dive into any water or run in any direction, and I would find new things. It was a world full of wonder and some horror, and I was absolutely 100 percent immerged in the story. I never saw the edges of the world, or even realized where I was in teh real world while reading. I could swear I visited Sarn in body as well as in soul. Just wow.

That is all brilliant and well and all, but my cherry on top of that was the characters! Not just a non human (though human like) one, not only an "evil" fell witch, who has control over magical green fire, no we also have Lady Vincenza "Vintage" de Grazon. While I loved the other two as well, as they are wonderfully fleshed out, individual, flawed and organic, Vintage just blew me away.

She's an explorer. A fighter. An archaeologist. A fine lady. An eccentric. She's lovely and charming and warm. She can also shot a crossbow better than most other people.
I simply adore how she can be so very much herself, and not fall into any of teh typical tropes. She's not just a northerly figure or a cold blooded assassin. She's a melting pot of all sorts, and I enjoyed her tone and voice and her curiosity so very much!

Now add a twisty plot, a good mystery (or 5) at the heart of the story, and a really smooth and gripping prose, and you got yourself one of my favourite books!

I can't wait to read more of this series...

very good but for a tiny technical fault

Very good book and the narrator is doing a great job, the characters' voices were distinct and suited their personalities. The only thing that bothered me a tiny bit was that sometimes words at the beginnings of sentences were muffled or broken off, making them hard to understand. It disrupts the flow of listening somewhat, but I was able to ignore it and enjoy the story anyway.