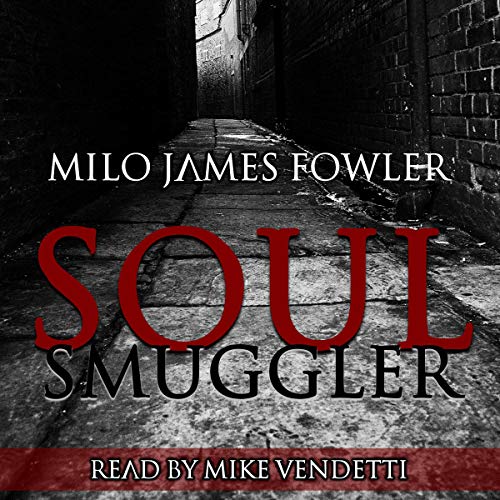 Who is Mercer? Coyote. Soul Smuggler.

A body-hopping, phantasmal anti-hero. A disenfranchised spirit doomed to inherit the earth, cursed by both heaven and hell.

An enemy of god, but no friend of the devil.

"The Coyote" - In the future, Mercer's services are requested by a powerful man seeking to keep his stepdaughter quiet about certain indiscretions.

"The Second Option" - Father Thomas, assassin from the clandestine Terra Sacra order, sets out to destroy Mercer once and for all.

"Abomination of Desolation" - A boy with horrifying powers is at the top of the church's extermination list, replacing Mercer for the time being. Father Thomas makes Mercer a deal he can't refuse if he helps rid the earth of the young abomination.

"The Coyote's Word" - When Mercer says he'll take a soul across the border, he's true to his word. But navigating the afterlife is no easy feat, even for the Soul Smuggler.

"Back for Blood" - A ravenous monster is on the loose in the city, and a young nun seeks out Mercer's help. It may take a monster to get rid of a monster, but Mercer has never dealt with anything like this before.

"A Coyote's Revenge" - Armageddon is coming, and the devil wants his due: those suicidal souls Mercer has been escorting to the Pearly Gates.

"Mercer's Ghost" - In this weird western, a young man on the frontier in search of fame and fortune instead finds himself swindled and left destitute. But help arrives in the form of a phantasmal, body-hopping gunslinger who seems to have ulterior motives.

"Coyote for Breakfast" - In this post-apocalyptic tale, a young girl grieving after a recent loss seeks out Mercer's help, but both she and the soul smuggler get more than they bargained for.

Would you consider the audio edition of Soul Smuggler to be better than the print version?

I haven't read the print version of the story. It may be hard, because of Mercer (Mike Vendetti) and his deep, gruff voice.

Mercer because he is the star of the book, and he is such a turn-on.

Have you listened to any of Mike Vendetti’s other performances before? How does this one compare?

Who was the most memorable character of Soul Smuggler and why?

Mercer, again because he is the star of the story, and has that gruff, deep voice!

The author turned me onto Mercer and the story by allowing me to win this audio book. It will not be the only one I will listen to. I plan to buy more as my pay allows. Thank you to Mr. Milo James Fowler with all of my heart and soul. I loved this story, and Mercer.

Here you have nine Mercer tales...All the stories are good from beginning to end...You will have trouble putting these stories down until you have finished them! Start reading with the confidence that you are in for a fantastic story!! Mike Vendetti also did a great job of narrating. I received this audiobook for free in a promotion and this is my voluntary review.

A creepy collection of short stories

Soul Smuggler is a collection of short stories about a man who's soul is trapped on earth unwelcome by heaven and hell, so he smuggles suicidal people's souls into the afterlife. There is a lot of ugliness and creepiness in these stories, but they are all rather good. I would like to listen to or read more.

I'd say this book is best suited for adult readers and listeners, though teens may enjoy it as well. It has quite a bit of gore and sexual content, but no graphic sex.

The narrator is well suited to the audio book.

This is just not my genre. The story is well written and well narrated. Try it you may enjoy it!

Soul Smuggler is a book of four noir tales of Mercer (Coyote) who is a hard drinking, body jumping demon who gets paid to take suicide souls and sneak them into heaven. The storyline is creative and definitely not what I am use to but it kept me engaged. If you like books that are in the noir, paranormal I highly recommend this book to you.

To summon a soul!

I enjoyed this story! What would it be like to be able to take someone's soul! To be able to make that decision! Narrator was good!

This is a very cool fantasy tale with an original premise. Excellent writing and narration in this one.

Nice story to listen to. A little different, a little weird, but all in a good way. It may take you a bit, or not, to figure out just who Mercer really is. Then you'll better understand the story.