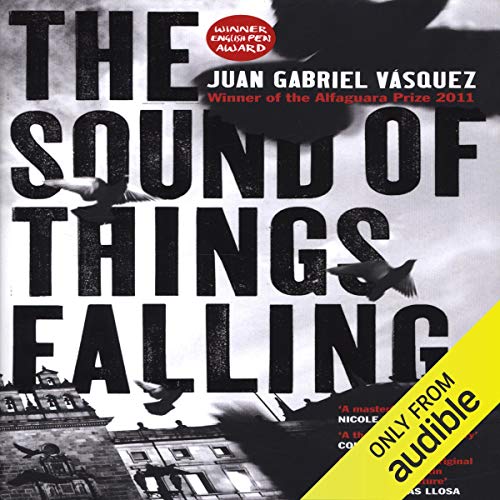 The Sound of Things Falling

Juan Gabriel Vsquez has been hailed not only as one of South America’s greatest literary stars, but also as one of the most acclaimed writers of his generation. In this gorgeously wrought, award-winning novel, Vsquez confronts the history of his home country, Colombia.

In the city of Bogot, Antonio Yammara reads an article about a hippo that had escaped from a derelict zoo once owned by legendary Colombian drug kingpin Pablo Escobar. The article transports Antonio back to when the war between Escobar’s Medelln cartel and government forces played out violently in Colombia’s streets and in the skies above. Back then, Antonio witnessed a friend’s murder, an event that haunts him still. As he investigates, he discovers the many ways in which his own life and his friend’s family have been shaped by his country’s recent violent past. His journey leads him all the way back to the 1960s and a world on the brink of change: a time before narco-trafficking trapped a whole generation in a living nightmare.

Vsquez is “one of the most original new voices of Latin American literature” according to Nobel Prize winner Mario Vargas Llosa, and The Sound of Things Falling is his most personal, most contemporary novel to date, a masterpiece that takes his writing - and will take his literary star - even higher.

This is an excellent, absorbing novel nearly ruined by a poor narrator.

The story focuses on a young law professor in Bogota who grew up uncomfortably through the violent years when Pedro Escobar's drug gang imposed random violence on all levels of society--even blowing up a passenger plane in flight to kill a politician who was not on board.

There are several plane crashes in the course of the novel, but the "things falling" include more than airplanes--the professor's life gradually disintegrates after a mysterious older man, a friend he met shooting billiards, is shot dead on the Bogota street. The professor had tried to stop the shooting, but he is also shot and seriously wounded. The story turns to the professor's increasingly obsessive search to understand the friend's life. Along the way, we learn the family history of the murdered man--his grandfather was a prominent pilot for the Colombian military, his daughter raises bees in the countryside. We also learn much about recent Colombian history.

But the narrator is the worst. He reads the novel indifferently, as if he were reading a cookbook. You get the impression as he reads that he has not himself read the material in advance. He makes no effort to differentiate the voices of characters or to put any feeling into their conversation. At times, it's hard to tell which character is speaking because they all use the same resigned monotone.

While the poor narration makes it hard to stick with the book, it's worth the effort. "The Sound of Things Falling" is a thoughtful and moving, if tragic, tale of ordinary people trying to get by in extraordinary times.

'The Damaging Exercise of Remembering'

Against the backdrop of an explosive and defining moment in history -- Pablo Escobar and the Columbian drug cartels, the bloody War on Drugs, the growing cocaine addiction -- Vasquez has set an amazing story that immediately grips the reader. With just his words, he talks to our senses, filling the reader's head with photos and journals, maps and newspaper articles, smugglers flying their illegal cargo, buried secrets, heart wrenching confessionals...and the hippos. An intricate story of the interconnectedness of different characters, different times, seamlessly flowing into a foreign world of heightened senses and paradoxical beauty.

...In 1981, drug lord Pablo Escobar, the vicious head of the Madellin cartel, imported 4 African hippos from New Orleans to be exhibits in his extravagant private zoo. After he was gunned down in '93, the government took possession of most of the animals, leaving a few of the heavy and difficult to transport, hippos behind. The hippos, which had grown to a sizeable herd, basked in the lakes Escobar had constructed, while the zoo around them fell into disrepair. In 2006, a pair of those hippos, Pepe and Matilda, wandered away from the zoo and into local legendom. The mates seemed to have disappeared until in 2009 when they were photographed just 63 miles from the zoo site, grazing in tall river grass with a small calf by their side (dubbed Pepito). Suddenly, stories of marauding hippos terrorizing villagers, destroying crops, killing livestock, began popping up. (You might even remember the NY Times articles on the hippos, or the coverage on TV news.) The government responded by circulating stories of the diseases the *Artiodactyla* carried and *WANTED: Hippos* posters went up throughout Columbia...

Antonio Yammara has just finished reading the final chapter of PePe's life; a picture of the *hunters* standing over the corpse of the one and a half ton black hippo [a squad described by the NY Times, Sept. 10, '09: "Even in Colombia, a country known for its paramilitary death squads, this hunting party stood out: more than a dozen soldiers from a Colombian Army battalion, two Porsche salesmen armed with long-range rifles, their assistant, and a taxidermist." the picture is archived and can be looked up]. Included in the article he was reading was the brutal description of the dismemberment and burial of the animal, and the plans to continue the hunt for the remaining members of this hippo family that fled as the larger hippo was taken down. A familiar sense of melancholy spreads through Antonio. Even his death didn't bury Escobar's violence and greed; the echoes are still being heard and felt. But, this isn't the story of Escobar or his drug cartel, or of hippos.

The memories unlock in Antonio an emotional link to an old mysterious friend...and Antonio begins to recall the series of events that seemed to fall out of the sky and form his life's tragic path when that friend entered his life. Unable to thrust himself out from a crippling cycle of PTSD [Post-Traumatic Stress Disorder], Antonio is obsessed with connecting the events and people, and with answering some tenacious existential questions that have plagued him. The story begins *in media res* -- Antonio coming to a point in his life where the past compels him to find answers in the future at all costs. The title is a metaphorical reference to 2 airplane disasters that tightly connect one time to another, and align the characters. A nightmarish time in history, but as Antonio says, the story is not exclusive to him or the times, "It has happened before and it will happen again."

It is in a smaller sense, a story of the effects of the war on drugs and the people involved, the paradox of the event that harms us is often the thing that heals us. On a bigger scale, there is the universal theme that the dissonance of the past reverberates throughout time and people. The human lives pinned against the "tide of historical events," are the carriers of the psychic wounds, and very often, the price of keeping the meticulous balance of the scales of justice unjustly falls on the fragile shoulders of the innocent... even the hippos.

This isn't a story everyone will like, it burrows deep into a tormented soul and takes you there. Parts of me resisted associating with such a heavy pain. Even days after I finished, I was discouraged, trying to organize my feelings. Vasquez leaves you with the melancholy thought..."Who worries about us when we don't show up, and who can go out and look for us." It wasn't until I got the rebound whack to the head from this boomerang of a book that I realized that I was so blindly affected by the book and was still crawling out of dark places... that's what I call being lost in a book.

What did you love best about The Sound of Things Falling?

no favorite characters but Elenor Fritz because of Mike's pronunciation and the sonerous way that her husband kept saying it made her memorable. The author doesn't realize her fully and her motives for her abrupt return to the US and then her return when her husband summons her doesn't work

Her captured the mood and voice of the author perfectly. The prose is poetic and sinister, the story romantic and yet ominous and bleak, it's a mirror of the dense jungles and mountainous terrain of Colombia and it's all there in his performance. I listen to the book again just to hear him read it.

If you could rename The Sound of Things Falling, what would you call it?

Slouching toward Byzantine --the book is reminiscent of the Yeats poem in its bleakness and beauty and about the end of things, a culture, a people, love.

Insulted by the narrator's performance

The story was fascinating and well told.The narration was an insult, particularly to Latinos (I am Hispanic). Mr. Vendetti couldn't be bothered to learn the correct way to pronounce Spanish names, places and words? I can't believe that the editors at Audible would approve such a dismal performance.

Who would you have cast as narrator instead of Mike Vendetti?

I've listened to literally hundreds of narrators on Audible. When I buy a book, I never really pay attention to the narrator, because they have consistently been terrific. Lesson learned. I'll preview the book before purchasing and NEVER purchase one that has Mike Vendetti as the narrator.

Would you try another book from Juan Gabriel Vasquez and/or Mike Vendetti?

This is a wonderful book, beautifully written, but why would you choose such a terrible reader; someone who fumbles most polysyllabic words in English and whose Spanish is gibberish! I'm a big audible user, listening to at least two books a week, and this was the worst reader I've heard. When Vasquez writes another book, I'm definitely going for it, but only on paper!

He sounded as unfamiliar with English as he was with Spanish! Ruined the audiobook.

Did The Sound of Things Falling inspire you to do anything?

write this review; my first ever.

Audible; please get a new reader! This book is too good to waste!

Ditto all previous criticism of narrator

The narrator showed no evidence of having practiced before narrating this book. And it wouldn’t have mattered anyway because he was terrible in every one of the ways described by prior reviewers. What would be an improvement over this narrator? How about a parrot raised in a Spanish household.

It sounded like his dentures were too big - slipping and sliding over words that sometimes jumbled together in an effort to get through a sentence without taking a breath. Skips and breaks like bad splicing. Very distracting and if I didn't have to read it in time for a book club I would have never gotten through it. Waste of money.

The narrator cannot pronounce even basic Spanish words - including Colombian cities which interferes with this version.

The narrator is great, even his squirmy Spanish is somewhat lovely. The translation gives Vásquez a Belowish tone he doesn't necessarily have in Spanish. It's a good book, steady rhythm, stable masculinity.

I at first struggled. I felt like he said allot but said nothing to many words . The further into it I got I began to see his words were so descriptive in order to transport us to Columbia, to feel as if you are a fly on the wall.