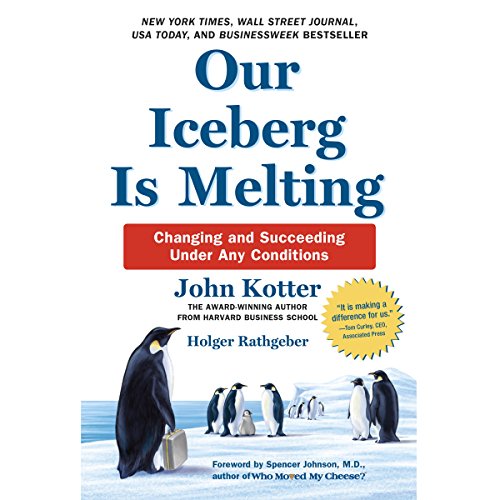 Our Iceberg Is Melting

A new edition of the classic business parable that has sold more than a million copies since 2006.

Our Iceberg Is Melting is a simple fable about doing well in an ever-changing world. Based on the award-winning work of Harvard's John Kotter, it is a story that has been used to help thousands of people and organizations.

The fable is about a penguin colony in Antarctica. A group of beautiful emperor penguins live as they have for many years. Then one curious bird discovers a potentially devastating problem threatening their home - and pretty much no one listens to him.

The characters in the story, Fred, Alice, Louis, Buddy, the Professor, and NoNo, are like people we recognize - even ourselves. Their tale is one of resistance to change and heroic action, seemingly intractable obstacles, and the most clever tactics for dealing with those obstacles. It's a story that is occurring in different forms all around us today - but the penguins handle the very real challenges a great deal better than most of us.

Our Iceberg Is Melting is based on pioneering work that shows how eight steps produce needed change in any sort of group. It's a story that can be enjoyed by anyone while at the same time providing invaluable guidance for a world that just keeps moving faster and faster.

"Whether you work in a business or the business of life, everyone from CEOs to high school students can gain from what they take from this story." (from the foreword by Spencer Johnson, MD, author of Who Moved My Cheese?)

"...companies should buy a copy for everyone from the CEO to the stock clerk" (Michelle Archer, USA Today)

"I ordered and distributed sixty copies, evaluated its effect on our change effort, and then ordered five hundred more.... This is a gem." (Heidi King, Department of Defense)

underwhelmed fabelization of the previous two books. basic concepts are sound. no nuance. it's a story with too little surprise.

speed up the reading

I was able to follow the book while playing it at 2x. This cut my read time in half (math).

Great book, but narration skipped over some parts.

I enjoyed this book. I read a hard copy as I listened to the audiobook. The narrator skipped over some parts of the book, sometimes entire paragraphs. This may have been agreed on by the author and coauthor.

Recommended by my boss

The book wasn't for me. I found the story too drawn out. I found myself dreading turning on Audible because I just wanted to get to the part where they discussed the 8 steps and how they applied to real life non iceberg related change.
I find value in a story full way to remember the Kotter 8 step process for leading change. I wanted to like it more so I could connect more with my boss.

This story was a great analogy for life, particularly in the workplace. I can apply what I learned to my own strategies when navigating this game of life.

Loved it! great book. I'm looking forward to sharing with others. Very entertaining to read.

I bought the audible and the hard copy to read as I listened and I do not regret it. Thee book was creative, encouraging, funny and at times made me take a step back to think about how I've responded to melting icebergs. Great book and great read. A must read for people working in technology or changing environments like myself! 👏🏽👏🏽👏🏽👏🏽👏🏽

I had to read this book for a college class. I really enjoyed it. Hopefully, I can use the 8 stages of change to my advantage

Excellent stuff. Totally hels my attention . Genuine & believable character archetypes set in funny and compassionate overtones. I will probably read twice a year or before big changes at work

I just finished Leading Change and now have read this delightful metaphor for the topics from the main book from Kotter. I think listening to both has real value, though this book feels pretty good standalone. This one goes less into the details of pitfalls that the master book goes into, but it does make the overall process and best steps more memorable. The narrator is talented, and in addition to providing a nice, even read, also delivers lots of fun voices to help you make sense of the large cast. Overall a great buy and a good experience.

True at core, but more oriented at pursuers of top-down change management thannof bottom up.