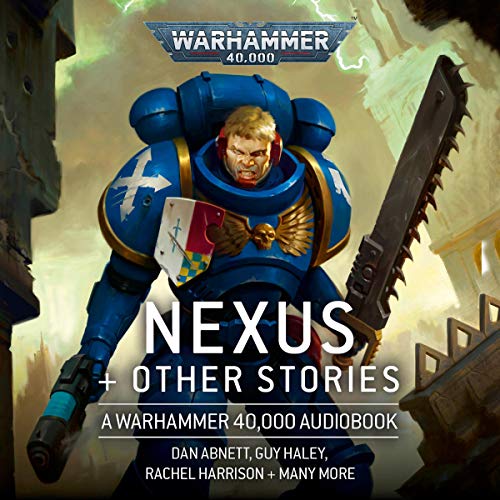 Take your first steps into the adrenaline-fuelled fiction of the 41st millennium with a thrilling collection of tales, including an action-packed novella pitting noble Ultramarines against sinister necrons.

Whether you're dipping a toe into the galaxy of Warhammer 40,000 or are a hardened veteran of the universe, this anthology is the perfect way to discover the many factions of the games in action-packed tales.

Within this book you will find Nexus, a fantastic new novella by Thomas Parrott.

In a galaxy beset by war, where the Adeptus Astartes are all that stand against annihilation, the Ultramarines are exemplar - noble, honourable and oathbound to the protection of mankind. Where the predations of the alien, the witch and the heretic threaten the Imperium, the Angels of Death fight to oppose them.

Brother-Sergeant Allectius wages a brutal war of attrition against a seemingly endless xenos foe. But when the vile necrons unleash a mysterious pall over him and the people he protects, Allectius must take his fight beyond the walls...for more than just victory, now their very survival is at stake.

Also included in this book is a host of awesome short stories to give you a flavour of the many warring armies that exist within the worlds of Warhammer 40,000.

A big collection, some good and some bad.

This book is a bit of a sampler. There are several stories, some fairly long. The quality of the narration and of the stories varies fairly wildly.

Let me begin with the bad.
Void Crossed was a story I could not stand to listen to any longer. The narrator had such acute, uneducated, mispronunciations that I had to stop a few minutes in.

Duty Unto Death was SO monotonous that I stopped after the 2nd Tyranid wave. The narrator suffered from an inability to make any differentiation between normal conversation and moral battle. The story was bad enough that I just didn't care anymore.

Robert Rath's Ork story was excellent! I will buy more of his stiff.

The Crystal Cathedral was unexpectedly compelling.

Eisenhorn was a winner as usual.

Nexus, the title of the anthology and this particular story, was tedious, overly long, and seems to reflect the sort of generally depressive nonsense stories of Imperium vs Necrons common right now.

War in the Museum was a lot of fun!

On balance, the collection is worth it. There are a few stinkers in the set however, so be ready to skip a few.

Good collection of stories in the 40k universe. Some have been in other books but good overall into to factions.

The Good the bad and the long winded narrator

A bit more rewarding than Crusade+Others for the read 40k scholar, but some stories are bland for the same reasons. Some stories are outright flat. Great content for the price!

A very good mix of stories throughout the universe

Although I did not love each story, each was a great example of that faction's views or characters. All but one story had me writing down it's suggested 'next read' as a book to spend next month's credits on.

They are plain and blank.
Others are good.

Last one about custodies is also meh.

I'm going to approach this review a little differently. First, "Nexus" is classic 40K! If you are a 40K fan, there's not a single story in here that you won't love. I love to get the audio books, so I can listen to all the stories while I travel. This is definitely a great way to approach this one! All of the narrators/voice actors are fantastic. John Banks, Richard Reed, Emma Gregory, these are my favorites or at least the ones I am most used to throughout the stories, but each of the actors do marvelous jobs at bringing the stories to life. Just a side note, John banks, at least to me, sounds a lot like Ewan McGregor and Emma Gregory, after hearing this, has a tremendous singing voice! Five stars, all the way around. Enjoy!

not worth listening to if it were free.

unfortunately I finished the whole thing. almost all the stories were short and boring adding nothing to 40k

The best stories have the more human feel to them. Some of the stories are a little too "grime dark for me.

meh not worth it. just buy an actual book

a collection of samples half of them are from low tier writers. the other half that have length passion and plot worth delving into one would be better served just buying the book. At least a third are from books I have already enjoyed. not worth it for me.