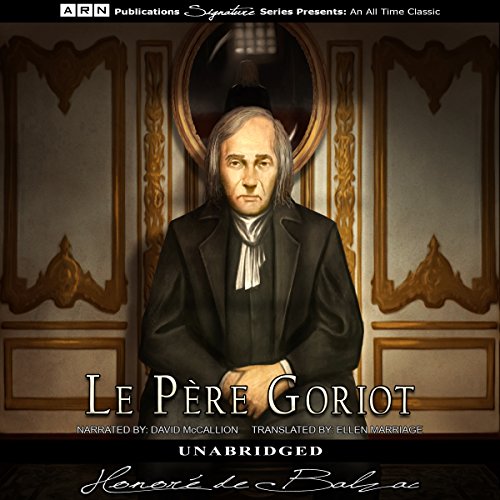 Honoré de Balzac uses his classic style of detail to describe a most controversial setting in his novel Le Pere Goriot. The story takes place in Paris just after the fall of Napoleon in 1819. The story focuses on three characters, Rastignac, a student who wants to try and make it big in the capital, Vautrin, an interesting and funny character who is also quite mysterious, and the main character, Goriot, that carries a heavy burden that only a loving parent would endure.

The story follows the journey of Rastignac, the two daughters of Goriot, and Goriot himself who was once a wealthy businessman. It's a heart wrenching story of a man driven to poverty by the selfless acts and the overwhelming love and devotion that he has for his two daughters, both of whom are very selfish, and do not share the same love for their father.

How far will Goriot go to keep his daughters happy, and will the daughters ever appreciate the great sacrifices this man has made for them?

David McCallion does a very pleasing job of both narrating and voicing a number of characters in Balzac's very modern seeming book. This is a story highly entertaining and with a poigniant and disturbing moral. It is a story written with subtle hilarity and blackest comedy. In brief, Pere Goriot (father Goriot) is the father who loves his two spoiled daughters to a point which nearly fails human understanding. Through his generosity to them he has fallen from millionaire to pauper. They by way of marriage and through his help have attained the titles of Countess and Baroness, but now that he is poor he is an embarrassment to them and they no longer acknowledge him. His family are his fellow boarders in a run down boarding house in the Latin Quarter in Paris where most of the action transpires. This book in it's humour reminded me of Confederacy of Dunces (another great book) it is at once absurdist and highly realistic. I enjoyed it thouroughly and may indeed listen to it again after a while. It was a pure pleasure.

It was difficult to maintain interest. A classic novel of great disappointment. Though probably intended as commentary and selfishness and self sacrifice of early Paris, its base nature, it was marred by histrionic, overwrought, over sentimentality.

Very much enjoyed this reading.

I was a bit leery at first, but then I got into the pace of the reader. A very good reading of an important classic. Highly recommend.

In my view, this is one of the 100 best novels, not at the top, but one well worth the attention of all who love serious literature.

The story, its fundamental tragedy, and the remarkably effective social commentary and criticism are of very high quality. And, of course, Balzac is a worthy writer of words and language.

The narrator was good, but, I think, not among the best. His reading of Eugene was, for me, effective, but, less so, for Goriot and the daughters.

In any event, I’m glad I heard it and would recommend it.