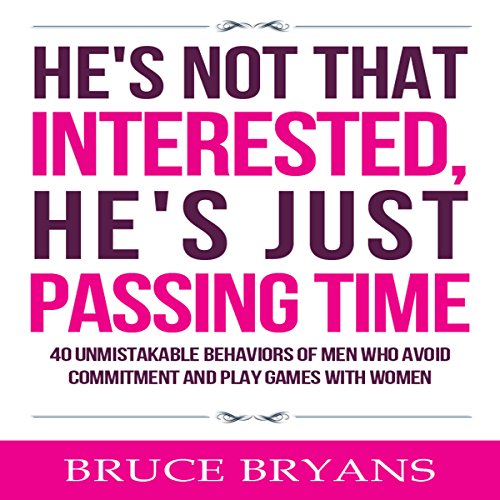 Men don't really have "commitment issues". At least, not in the way most women think men do. When a man tells you he has "commitment issues", there's a good chance that what he really means is he's not that interested in you and is just using you to pass time with until he meets someone "better".

But even though men don't really have commitment issues, they don't find it necessary or in their best interest to inform a woman when she's nothing more than a beautiful distraction, a way to earn the respect of his peers, or just a target to sharpen his seduction skills so that he'll be primed and ready when a "better" woman comes along.

In this audiobook, you'll get an inside look at how a man thinks and interacts with a woman when he's not that interested in her. It's extremely difficult for a man to waste your time and treat you like a short-term plaything without exhibiting certain unmistakable behaviors that clearly communicate that he's trying to keep you interested...but unclaimed.

In this audiobook, you're going to learn:

Get started now, and discover how to tell if a man desperately wants you or if he's just not that into you.

sift through the information

some info will help but I have some problems listening to some things. be careful so this info doesn't cause you to breakup a healthy relationship because it gives the impression to always suspect the worst. a bad mood or being late can be for a good reason.

Not for sensitive ppl/ low self esteem

It's very insightful. But if you're like me and have a brutal inner critic. DO NOT BUY THIS. It will tear down a bunch of self esteem progress that you've made. You will ultimately blame yourself for being worthless instead of using the insightful info.

A High Quality Woman'S MUST READ

The best book iis a true enlightenment when entering the dating world. If you dont want to waste your precious heart and time on losers and players this is a must read first. THIS BOOK IS THE BEST INFORMATIVE GUIDE TO NAVIGATE THROUGH THE COMPLEX MANIPULATION MEN TRY ON THE HIGH QUALITY SINGLE FEMALE. Exactly what I was looking to learn from after several manipulative relationships. I laughed at the exact description Mr Bryans gave of men I thought had my best interest and clearly did not! Even the disappearing hospital scenerio, it happened to me! I will be reading his other books for sure. Thank you Mr Bruce Bryans for your guidance and sincerity keeping a high quality womans heart safe pure and happy in life.

Great tips! Back to dating after 17 years

I have always thought this way; however, have always also secind guessed myself for one reason or another. ..be it friends and family viewpoints or just the negative fdeedback from the individual that I was with at any interval whwn ive dated just about evety man on that list for YEARS. Eventually, I did leave for my own happiness. ..this outline of male behaviors etc. really is comforting to hear that women arent crazy like men like to say. And it genuinely is better to break it off before it goes too far for both parties...its a guilt free way to be a practical and caring individual for yourself and anyone that may be impacted by the relationship that you get into. For me, thats my children. ..I refuse to introduce them to anyone who doesn't respect their mother...and now I can actually feel good about that. I gave the book 5 stars. It deserves it because it reminds us all of what we deserve and how to eliminate the things that we don't.

Things you know but still need to hear!

At first I didn't like the reader, but he eventually he on me. Great book to validate your woman's intuition to catch the signs of trouble and trickery and really breaks down so many different duds out there. Also holds you accountable to loving YOURSELF enough to not take less than your worth...and not be a psycho :)

A Must Read if You Keep Having Dysfunctional Relationships with Men

This book was an eye opener for women who wants to weed out guys who are just wasting her time. After reading this book, you will be able to identify behaviors of men who you typically find yourself involved with. Hopefully after reading this book you will exit your current relationship if it isn't going in the direction you desire, and you will have the tools and information you need to have a blossoming relationship when you enter your next one.

It's great to hear things from a man'a point of view. I listened to this on Audible (because I'm lazy) & it was so worth the price. Going through a difficult breakup now with someone who just up and left when things are great. Getting advice from another man who can clearly open my eyes to things I didn't realize before is just what I needed. I'm about to buy his next book! Thank you Bruce!

wow, wish i knew the signs years ago!

this will help me so much in the future - it also helps me confirm that my current boyfriend is not long term. ..