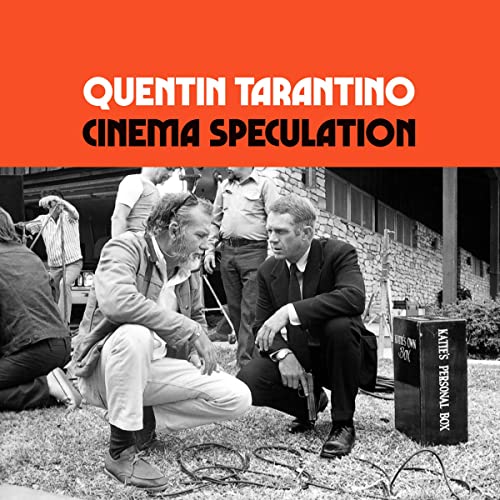 The long-awaited first work of nonfiction from the author of the number one New York Times bestselling Once Upon a Time in Hollywood: a deliriously entertaining, wickedly intelligent cinema book as unique and creative as anything by Quentin Tarantino.

In addition to being among the most celebrated of contemporary filmmakers, Quentin Tarantino is possibly the most joyously infectious movie lover alive. For years he has touted in interviews his eventual turn to writing books about films.

Now, with Cinema Speculation, the time has come, and the results are everything his passionate fans - and all movie lovers - could have hoped for.

Organized around key American films from the 1970s, all of which he first saw as a young moviegoer at the time, this book is as intellectually rigorous and insightful as it is rollicking and entertaining.

At once film criticism, film theory, a feat of reporting, and wonderful personal history, it is all written in the singular voice recognizable immediately as QT's and with the rare perspective about cinema possible only from one of the greatest practitioners of the artform ever.

I finally understand where Quentin Tarantino got his inspiration for all the movies he’s made so far! It just makes so much sense listening to him talk about the violent and dark films he’s seen in 70s (Deliverance) but also the blaxploitation cinema and the crazy B-movies of the same era!
I had a blast listening to this audiobook and even though Tarantino is only narrating the first chapter (love his natural storytelling talent!), the other guy does a pretty good job too! It’s hilarious, written like only Tarantino can write and you learn a lot!
Definitely recommend this book to all film buffs and QT fans alike!!

An incredibly deep and poised hand over the roots of cinema .. an acute description of what made it surface to it’s light. An heartfelt chronology bathed in an unforgettable nostalgia that pins gold nuggets positions to a broader map of Quentin’s genius. A definite must read, must hear, worthy of all the popcorn needed to let all that cinema knowledge sink… this is not a shortcut but definitely a fast train that you must run alongside

Tarantino could have narrated more. other than that this an interesting insight into the mind of Tarantino and the world he grew up in.