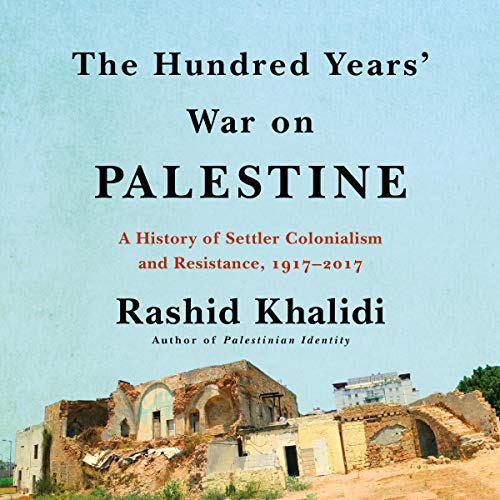 The Hundred Years' War on Palestine

A landmark history of 100 years of war waged against the Palestinians from the foremost US historian of the Middle East, told through pivotal events and family history.

In 1899, Yusuf Diya al-Khalidi, mayor of Jerusalem, alarmed by the Zionist call to create a Jewish national home in Palestine, wrote a letter aimed at Theodore Herzl: the country had an indigenous people who would not easily accept their own displacement. He warned of the perils ahead, ending his note, “in the name of God, let Palestine be left alone.” Thus Rashid Khalidi, al-Khalidi’s great-great-nephew, begins this sweeping history, the first general account of the conflict told from an explicitly Palestinian perspective.

Drawing on a wealth of untapped archival materials and the reports of generations of family members - mayors, judges, scholars, diplomats, and journalists - The Hundred Years' War on Palestine upends accepted interpretations of the conflict, which tend, at best, to describe a tragic clash between two peoples with claims to the same territory. Instead, Khalidi traces a hundred years of colonial war on the Palestinians, waged first by the Zionist movement and then Israel, but backed by Britain and the United States, the great powers of the age. He highlights the key episodes in this colonial campaign, from the 1917 Balfour Declaration to the destruction of Palestine in 1948, from Israel’s 1982 invasion of Lebanon to the endless and futile peace process.

Original, authoritative, and important, The Hundred Years' War on Palestine is not a chronicle of victimization, nor does it whitewash the mistakes of Palestinian leaders or deny the emergence of national movements on both sides. In reevaluating the forces arrayed against the Palestinians, it offers an illuminating new view of a conflict that continues to this day.

Hardliner neocons and ideologue Zionists will remain predictably unmoved by Khalidi's masterpiece. Everyone else can expect a thoughtful and meticulous examination of Israel's anachronistic settler-colonial project and a sensitivity to the human and civil rights of both Israelis and Palestinians when venturing into speculative, prescriptive territory regarding a future peace settlement. Highly recommended.

Finished the book in 2 days. Couldn't stop listening. very educational! Narration was great and I really enjoyed it.

As a European I've been sympathetic to the Palestinian cause, but I've been turned of by the organisations representing them. This book gives a good idea what is at stake for all people Involved over there.
Narrator was good and understandable.

succinct historical recap of the situation

This book is a great start to getting the highlights as well as what has been going on in the Palestine Israel conflict for the last 100 years.

The author gives a lot of context to the history and the complexities of the region and the various interests at play. It gives a much clearer picture of what is a muddled situation, at best.

This book gives a thorough and even-handed history of the region, and makes a clear case for the continued existence of Palestine. For too long, Israel has tried to control the narrative and present itself as the victim, but the information age has broken through to the truth of the conflict. This book also looks at how different groups claiming to support Palestinians along the way used them for their own purposes, and at the critical support that Israel receives from the U.S. in maintaining its stranglehold on the Arab population.

The Palestinians Need Their Own Land

As a Yoruba Jew, I want the Palestinians to have a Islamic country that does not involve staying in the same land as Jews and Christians.