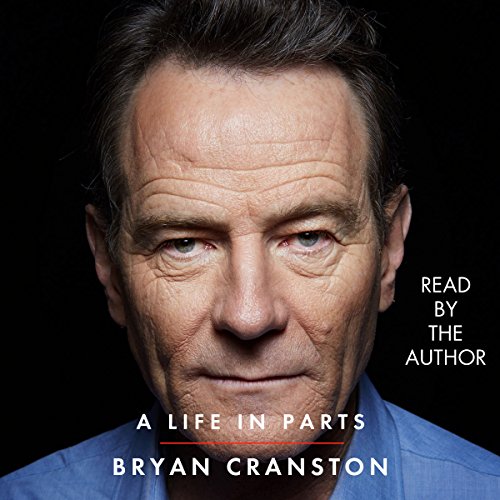 A Life in Parts

Winner of the 2017 Audie Award for Narration by the Author

A poignant, intimate, funny, inspiring memoir - both a coming-of-age story and a meditation on creativity, devotion, and craft - from Bryan Cranston, beloved and acclaimed star of one of history's most successful TV shows, Breaking Bad.

Bryan Cranston landed his first role at seven, when his father, a struggling actor and director, cast him in a United Way commercial. Soon Bryan was haunting the local movie theater, memorizing and reenacting favorite scenes with his older brother. Acting was clearly the boy's destiny - until one day his father disappeared. Suddenly destiny took a backseat to survival.

Seeking something more stable, perhaps subconsciously trying to distance himself from his absent father, Cranston decided on a career in law enforcement. But then, while a young man on a classic cross-country motorcycle trip, Cranston one day found himself stranded at a rest area in the Blue Ridge Mountains. To pass the time, he read a tattered copy of Hedda Gabler, and in a flash he found himself face-to-face once again with his original calling. Suddenly he thought this was what he wanted to do, what he would do, with the rest of his life. Act.

In his riveting memoir, A Life in Parts, Cranston traces his zigzag journey from his chaotic childhood to his dramatic epiphany and beyond, to megastardom and a cultlike following, by vividly revisiting the many parts he's played on camera and off. With great humor and much humility, Cranston chronicles his unlikely rise from a soap opera regular trying to learn the ropes and the politics of show business on the fly to a recurring spot as Tim Whatley on Seinfeld, finding himself an indelible part of popular culture. He recalls his run as the well-meaning goofball, Hal, on Malcolm in the Middle, proving to writers and fans that he was willing to do anything, anything, for a laugh, and he gives a bracing account of his run on Broadway as President Lyndon Johnson, pushing himself to the limit as he prepared, physically and mentally, for a tour de force that would win him a Tony to go along with his four Emmys.

Of course Cranston dives deep into the grittiest, most fascinating details of his greatest role, explaining how he searched inward for the personal darkness that would help him create one of the most riveting performances ever captured on-screen: Walter White, chemistry teacher turned drug kingpin.

Discussing his failures as few men do, describing his work as few actors can, Cranston has much to say about innate talent and its benefits, challenges, and proper maintenance, but ultimately A Life in Parts is about the necessity and transformative power of hard work.

"The narration is pitch-perfect, profound, and room-filling, thanks to Cranston's sonorous timbre and expert inflections. Audio fidelity and production values are exceptionally strong, and Cranston's performance is on par with any of his award-winning TV roles.... This is a winner - a great listening experience." ( AudioFile)

Cranston is the hardest worker

Would you consider the audio edition of A Life in Parts to be better than the print version?

Cranston's childhood and teens set him up to know what's important in life. He never was self destructive, or sabotaged his career in any manner. It's unusual to listen to the life and career of Bryan Cranston, hard work and talent, with no goal to become Famous, was the key to Bryan Cranston becoming a World Wide Star.

What other book might you compare A Life in Parts to and why?

Alec Baldwins "Nevertheless" captures a love for the craft of Acting, intelligently written, like "A Life in Parts."

What does Bryan Cranston bring to the story that you wouldn’t experience if you just read the book?

His reading the book made me feel like I was able to eavesdrop into one of the most extraordinary careers in modern Hollywood.

This is a fantastic book – read by an amazing storyteller. It makes me want to go back and change all other previous five star ratings to fours – so that this book stands alone!

Buy this book and start it immediately!

They're all good parts.

Bryan holds nothing back, the reader is left knowing he's been true in his retelling of his life's story. wonderfully written, paced perfectly and performed wonderfully by the author making the read even more enjoyable. I found myself laughing & crying at times but never bored waiting for the next good part to come along, because they are all good parts. Thus far Bryan seems to have had one heck of an interesting life. I can't wait to hear more from him, either written or narrated!

Great book. It was very cool to learn so much more about Bryan Cranston. Beyond his many characters, regressing back into his rocky and near direction-less beginnings. The events that shaped him into the man/actor he has become. Some of the information he shares is so personal and surprising, you can't help but blush, gasp, or laugh out loud as he reads it to you.

Cranston is great, but the book is just so-so

Not bad by any means, just not my most favorite memoir. He's had an interesting life, but I still found that I wasn't gripped by his words. There is some sage advice sprinkled through out. I did appreciate his insight to the different film and tv projects he was on.

Bryan Cranston is magnificent and fascinating! His sense for story telling is compelling and wonderful to listen to. Thank you, Bryan, for such an entertaining book!

Bryan Cranston is the epitome of what a hard working person is and should be. No matter how big the achievement he remembers that every decision he has made to up to that point got him there. Remembering the people that helped along the way is a form of humility too which we should all aspire.

A very enlightening and fun trek through the life of this self made, adventurous man. A man who carved a path through adversity, lived life on his own terms, and found himself in the process. A man who has taken his fans on an emotional rollercoaster ride; from his perfect comedic timing as Hal, to the shockingly human and dark side of Walter White. He will be best remembered for his impeccable ability to force so many of us to look deep into our soul and ask ; 'What would Walter White Do?

Excellent memoir on Bryan Cranston. "A Life in Parts" is a pure insight on his professional career on his acting and also his personal life. Not only he goes in depth on Walter White in Breaking Bad, but he also talks about his failures in his acting. There are very touching moments in this book, where my heart was warmth. When Cranston talks about his mom and how his proposed to his wife is one of those moments where you see his normalcy as being a son and a husband.

Cranston talks a lot on Breaking Bad. It's a must read to anyone that binged watched on one of the best series ever.

amazing from beginning to end gripping tense at some chapters it even made me cry! great story. I can see me hearing it again!

It was narrated magnificently but their was no substance. no story. or the most boring story, should I say.

You won't regret it

It was such a pleasure to listen to Brian Cranston's stories told by himself, I felt like he was here next to me, telling me about his life. Sometimes I talked back at him like a lunatic, lucky that nobody else saw me.

Cranston is the face of a new way of storytelling on the TV screen.

He does what he does brilliantly... storytelling.

Is his yes you can if u just work hard on it lamento a bit repetitive.. yes.

is it a bit misplaced of him to involve in his storytelling theraputic sessions which included his siblings? for my money, yes.

I think it's a miracle how close the myth of an actor is always repeating in his work.


DeNiro for example in his characters the ongoing loner with his rigid systems and coping mechanisms.

With Cranston in this book I got to see a very determined controlling personality which like his characters would go any lengths to succeed. And like with Walter, I couldn't empathize ,
because I found his perspective just a bit too rigid, too righteous.

Actually: I think Bryan Cranston in his character is the John Wayne of his time...a cowboy with more nerd credibility.. but like the name of his character.. whiter than white.

I got the impression that its a lot of debris piled together to make a hardcover... and that said.. the audiobook is worth it.. because for the better or worse.. if Cranston reads a phonebook.. he still will get you!