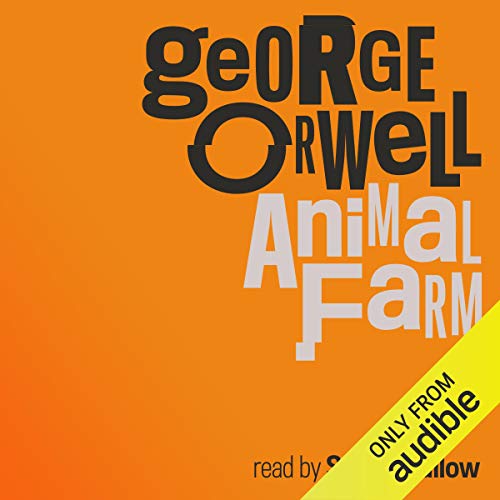 Animal Farm is George Orwell's great socio-political allegory set in a farmyard, where the animals decide to seize the farmer's land and create a co-operative that reaps the benefits of their combined labours.

However, as with all great political plans, some animals see a bigger share of the rewards than others, and the animals start to question their supposed utopia. They decide that working for humans is doing them no favours, so under the leadership of Napoleon, the only Berkshire Boar on the farm, and the other pigs, they drive out the farmer and his cohorts and set about structuring their own society.Based on a list of supposedly animal-friendly rules such as "four legs good, two legs baaaaad", the animals work together to harvest their own food and run their own farm. However, little by little, the rules begin to mysteriously change, and the pigs seem to gain power little by little, making the animals question what society they were striving for in the first place and whether their new-found freedom is as liberating as they might have hoped.

With direct allusions to political figures such as Lenin, Marx, Trotsky, Stalin, and Molitov, to name but a few, Animal Farm is one of the greatest socio-political works of all time, and this UNABRIDGED audio does it absolute justice.

One of the best books I've ever listened to

George Orwell crafted an amazing book that mustn't be missed. Along with 1984, Orwell manages to expose the true meaning of Stalinism, his works deserving to be thought in every school in every country that pretends to be liberal and democratic.

Also, the narration by Simon Callow is beyond any expectations, managing to deliver the strong moments of the book using the funny voices of the animals, expanding upon the already well written personalities of the characters in this book.

All in all, I consider this book a must-listen for everyone in love with history and politics.

The perfect combination of story and reading!

I can only second the title here. The story itself is great, funny and yet about serious things. The reading performance is top notch, it would probably be impossible to do it better! Combining these two, it's hard to find a better way to spend your​ Audible credit!

I loved the narrative. Mr Simon had me captivated with every voice tone to the characters

Everyone should buy this audiobook, whether you’ve read Animal Farm previously, or not.

For those familiar with the story, there is so much joy to be had from Simon Callow’s fantastic and fantastical reading. From the first sentence, I was mesmerized. His interpretation of Stalin… sorry… I mean Napoleon… is a delight. And at just over 3h, why not revisit the material?

For those who haven’t read the book before, what a great introduction. I’m not an expert on the Soviet revolution and the subsequent Stalin cult of personality, so Animal Farm – for me – remains the best and simplest allegory of this strange period of human history. Because the symbols have been boiled down to their most basic elements, I wouldn’t describe anything here as “dazzling”. But it’s this very simplicity that will keep you engaged. Strip away all the metaphor and dystopia, and you’ll see that Animal Farm is also a touching and charming story.

a classic if ever there was one. just makes you think about our world.

loved it. It is a great story and the voice performance was astounding. I would recommend.

Narration was excellent and the story has resonance in current times. A mist read to anyone who wonders about current politcs..

Already a great book, but made even more entertaining through the awesome voiceover and sound effects.

One of my favourites.

Awesome story and I dare say the allegory is still relevant today. I loved it that the narrator brought a personality to each character with such ease. As for the author, no amount of lavish praise is sufficient, but he is one of my favourites and has stood the test of time.

Perfect! Orwell's classic allegorical novel remains deeply touching and relevant to this day. This book should be taught in every school.
Furthermore, the voice actor is incredibly well suited for this reading and did a truly great job.

Loved the book and how it reflects a journey of a fictional society that adopts communism as a ruling form. A great read with a simple explanation about how communism works in an isolated setting. Easy to listen, a relaxing story, very short.

I listened to the whole thing in one day, which is very rare for me. George Orwell's classic is perfectly brought to life by Callow's voice work. Every character is distinctive. Excellent all round.

The performance by the reader is very very good. Overall was nice to finally hear the classic.

originating from a comunist country, this book just explains it so simply. remarkable metaphore!

loved it, though it is my first audio version of Animal Farm. The narrator does a pretty nice job, especially with the different character voices. Only negative for me: The few whistling bits at the chapter transitions. Unbearable!
But overall recommendable

The plot is absolutely worth listening to. It is consuming and very well written but unfortunately the narrator is slightly off - I personally did not really enjoy his voice and kind of speaking.

I really enjoyed listening to this book, the speaker does an excellent job. Unnecessary to mention, this book is extremely important and lectures us our (natural?) inner drive for power and how this must be recognized, before making non-sense assumptions that „others are bad, and we are good“. A great, leftist critique, today more important than ever, since radical leftism dominates the West nowadays.

I always thought the hype about this book to be exaggerated, but this is a perfect metaphor for revolutions in the real world. We are only human after all and subject to the same weakness for power and affluence as Stalin, Napoleon and every other person. The only difference is that most of us aren't in the position of power. This book demonstrates marvelously the ability of power to corrupt to the core.