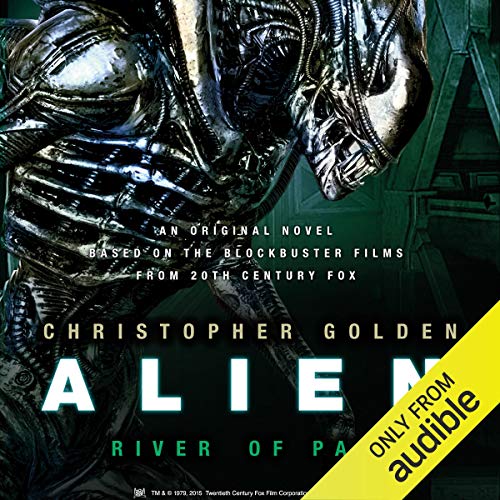 When Ellen Ripley finally returns to Earth, she learns that the planet LV-426 - now called Acheron - has been colonised. But LV-426 is where Ripley and the crew of the Nostromo found the original Xenomorph - the killing machine known as the Alien.

Protected by the Colonial Marines, the colonists seek to terraform the storm-swept planet. Two such residents are Anne and Russell Jorden, seeking a fortune that eluded them on Earth. On Acheron, Anne gives birth to the colony's first newborn - Rebecca Jordan, also known as Newt.

The wildcatters discover a vast, decaying spaceship. The horseshoe-shaped vessel is of particular interest to Weyland-Yutani and may be the answer to their dreams. But what Anne and Russ find onboard proves to be the stuff not of dreams but of nightmares.

This book filled in a lot of the gaps of what happened before the events of aliens and it was great!

They should make this one into a movie!

Of the aliens books I've listened to so far, this one is the best!

probably the best of the Alien novelizations

before things go crazy the author actually makes relateble interesting characters, and adds to the film Aliens rather than cheapening it.

This book is the backstory of what happened on LV-426 before Ripley and the Colonial Marines arrived. The colony has been on Acheron for sometime and we meet the Jordens when Anne gives birth to Newt. There is a small detachment of Marines assigned and the usual friction between colonists, the company scientists and marines. Portions of Aliens involving Ripley are mentioned during the timeline, most notably her rescue and arrival at Gateway station. That triggers a request by company man Carter Burke to have a specific set of coordinates checked out, which awakens the Aliens. Things go downhill from there. The audiobook is narrated by Jeff Harding, who is a somewhat rote narrator, but good with voices.

Please note, the book ending doesn’t match the audio ending.
If this story sounds intriguing to you, I highly recommend that you pick up the audio drama version of this, also called River of Pain and produced by the superb Dirk Maggs. It contains the full story and improves on the book. It’s a full cast production, including music and sound effects. It packs more of a punch than the book does.
I’ve also read Out of the Shadows and Sea of Sorrows as well. I also recommend the audio dramas also produced by Dirk Maggs as they improved on the books and are simply superb, with incredible casts.

even as an Alien completionist, I couldn't do this

the author is bad, just completely unable to write human dialog or present anything like a realistic human character. I love the Alien universe and sci fi in general, but I refuse to believe that the author has ever grasped the necessary observations to write a story. the narrator was also cringe and every character had the same grating, annoying tone.

Enjoyed this story in the Alien Universe

I’d love to see this story and Out of The Shadows both get a second story to continue these characters journeys to see how things panned out for each of them.

Wonder story. Fills in all the questions from the Aliens movie. Performance was excellent.