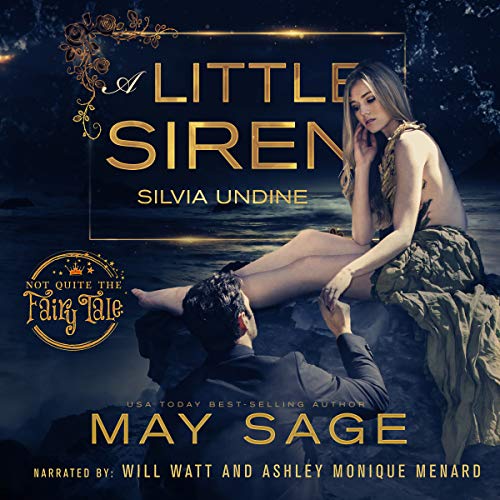 Not Quite the Fairy Tale is a series of paranormal romance for a mature audience. Expect adult language and naughty stuff. Each book is a stand-alone.

Silvia Undine, otherwise known as the Sea Witch, has enough of hiding. All she did three years ago was to save a child and his father, but she stands accused of causing the storm that put them in danger in the first place, and as a consequence, has been banished from her seas.

Enough of that. Defying the ruler of the seas, she goes back where she belongs.

Everything would be peaceful if it wasn't for the three kings who fight over, against, and for her.

The King of Alenia has taken a wife, and Erik of Denker knows it's his turn. After three years spent searching for the one woman who's ever mattered - the one who saved him and his son from drowning - he has to give up and choose an alternative. He does so, tying himself to the first suitable option - just when Silvia steps in his kingdom.

Im pretty sure this is not the right verision

I guess no one checked the audiofile before submitting it since there are a few times where the female narrator read her lines over and over again. And 2 chapters that goes silent in the middle. Please fix it and reupload the audiobook since the story and the overall preformance was good.

Good Story until chapter two. What is going on?
After chapter two there are no more voices and story. Why would you let people pay for this? Please fix the audio so I can hear the rest.

The audiobook has not been edited fully leaving gaps, repetition and an incoherent story.
A challenge as the story could have been good.

The story might be alright, but it's difficult to tell given the monumental awfulness of the production. Repetitions, errors, scenes out of order, vast amounts of dead air... It all amounts to a story that is impossible to listen to. I love a good fairy tale retelling, but I can't even tell if this one is any good, because it's impossible to follow. I suppose I'd have to try reading a print version. I doubt that I will bother. I will be returning this book.

couldn't wait to see what happened next. story interesting. short so it shouldn't have cost as much as it did but still good story. male narrator enjoyable. female narrator has a great voice but poor to bad pronunciation, frustrating to hear. my husband says her voice is sexy...... ok.... some parts of the story difficult to follow, like the long list of magic creatures. errors in the editing, repeats and such, but not nearly as bad as previous reviews stated. spoilers!! silvia's brothers are jerks for almost the entire story. she has a pet dragon that I think is adorable

Re-listened 2-17-21
Enjoyed more this time through. I think I paid closer attention so followed it better. May Sage is an excellent writer. I have not heard anything by her that I didn't very much enjoy.

Delicious twist to an old tale

I enjoyed this delicious twist on the fairy tale we all know. I listened on Audible because Will Watt is a favorite narrator. I see other reviews stating that the editing is bad and there are missing pieces, but this is definitely fixed now and the duet narration is well done. I enjoyed it very much!

I would love to say this was a great book, but alas I cannot. The story was great and the narration was fantastic, but there was something wrong with the recording. There were times when the narration would click and repeat several sentences and then there were whole chapters that were silent. No recording at all. It would skip at times from one place to another which caused some confusion.

I believe whole story would have been great if not for the repeats and missing chapters.