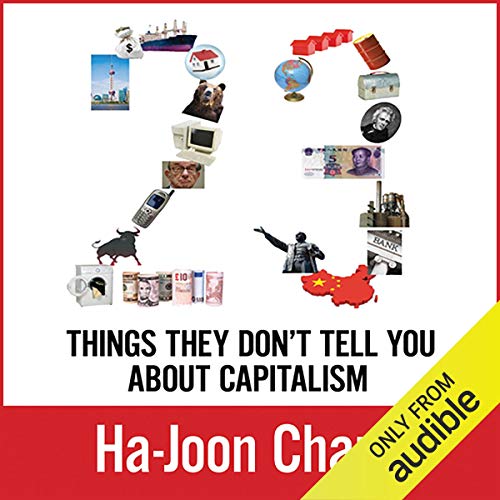 23 Things They Don't Tell You about Capitalism

23 Things They Don't Tell You about Capitalism

Thing 1: There is no such thing as the free market.
Thing 4: The washing machine has changed the world more than the Internet.
Thing 5: Assume the worst about people, and you get the worst.
Thing 13: Making rich people richer doesn't make the rest of us richer.

If you've wondered how we did not see the economic collapse coming, Ha-Joon Chang knows the answer: We didn't ask what they didn't tell us about capitalism. This is a lighthearted book with a serious purpose: to question the assumptions behind the dogma and sheer hype that the dominant school of neoliberal economists - the apostles of the freemarket - have spun since the Age of Reagan.

Chang, the author of the international best seller Bad Samaritans, is one of the world's most respected economists, a voice of sanity - and wit - in the tradition of John Kenneth Galbraith and Joseph Stiglitz.

23 Things They Don't Tell You About Capitalism equips listeners with an understanding of how global capitalism works - and doesn't. In his final chapter, "How to Rebuild the World", Chang offers a vision of how we can shape capitalism to humane ends, instead of becoming slaves of the market.

Ha-Joon Chang teaches in the Faculty of Economics at the University of Cambridge. His books include the best-selling Bad Samaritans: The Myth of Free Trade and the Secret History of Capitalism. His Kicking Away the Ladder received the 2003 Myrdal Prize, and, in 2005, Chang was awarded the Leontief Prize for Advancing the Frontiers of Economic Thought.

"Shaking Economics 101 assumptions to the core … Eminently accessible, with a clearly liberal (or at least anticonservative) bent, but with surprises along the way—for one, the thought that markets need to become less rather than more efficient." ( Kirkus Reviews)
"An advocate of big, active government and capitalism as distinct from a free market, Chang presents an enlightening précis of modern economic thought - and all the places it's gone wrong, urging us to act in order to completely rebuild the world economy: 'This will make some readers uncomfortable... it is time to get uncomfortable.'" ( Publishers Weekly)

Definitely contrarian but Many Arguments are thin.

Overall I thing Chang was successful in offering up an alternative viewpoint to the free-market capitalism rhetoric that is prominent in certain circles. However I find some of the arguments presented very thin and I do believe that Chang picks and chooses historical perspective when it suits his argument. I also believe that he does over-simplify many arguments for the his opposition. With that said, in other respects he does present data and case studies that suggest that the "free-market" policies should be more scrutinized and not taken as common sense.

This book was a little bit too technical for me. Didn't tell enough of a story and it didn't engage me that much.

Pretty interesting but some parts were a little complicated to someone like me. I understand some basic economics but some of the things he discusses are fairly technical and in depth. Still very interesting nonetheless

An excellent introduction for someone with no background in economics. Yet, so one-sided it's not even funny. Feels like only half the story.

What was I Thinging?

I support the free market and capitalism, but nothing is perfect, so I bought this book to see how it could be better. What I got was some unsubstantial arguments and a feeling of who cares.

He starts out by saying we have no free market because we have laws such as you can not make cars that pollute. I understood this, but thought he was being pretty picky. This then was the foundation for much of the rest of what I listened to. He was as bad as Rush Limbaugh when it comes to cherry picking his arguments and putting words into those who disagree.

I was educated in that I learned that large corporations that just try to make money for their share holders helped bring down manufacturing. I agreed, but did not see what I could do about this.

Several of his things left me thinking, And I care Why?

Unless your a socialist who likes listening to someone who thinks like you, I believe this to be a waste of your time.

A shallow and destructive book


This book contains some interesting anecdotes, if you can keep your blood pressure down. I only made it half way through. The only way in which I could recommend this work is as an example of everything that's wrong with political and economic discourse. It's not actually a book on economics by any stretch of the imagination. It is an overtly political book, which sets up a straw man in the form of "free market economists" and proceeds, impotently, to attempt to knock it down. Here is a summary of my reasons for hating it:

- It argues against people, not ideas. For example, it argues that opposing protectionism is an invalid opinion because several illustrious American politicians were in favor of it. It then counters the perceived "counter-argument" that Jefferson was for free trade by stating that he was also against patents, which makes him inconsistent with other free market economists. No discussion of the actual merits of free trade seems to be present here.

- It throws around lots of statistics about prices, wage rates, per capita income, and so on very carelessly. No specification is ever even given as to whether the figures are real or nominal ones.

- The book assumes a great deal about the reader. For example, it seems to pander to an audience that desires secure jobs with as little variation in work responsibilities as possible. The book repeatedly characterizes changing jobs often, working part time, or working harder as bad, with no explanation as to why it makes these assumptions.

- Many arguments are not arguments at all, and are easily debunked via reductio ad absurdum. Of course the author seems to be attempting to weasel out of this trap by not presenting any concrete opinions of his own, only attacking others', but that doesn't really improve anything for me. For example, he claims outright that capital flow across borders causes instability and is bad for growth. If this is true, then where is the limit? Should each town have capital flow restrictions to neighboring towns? Why are national boundaries the right lines of delineation?

- The author is a big fan of China as an example of a heavily controlled economy experiencing great growth. He never addresses the obvious issues that: 1. Much of this growth is in "special economic zones" with more freedom than the rest of the country 2. Much of it is via foreign direct investment 3. The conventional wisdom is that China began to grow after liberalization under Deng Xiaoping.

- What finally stopped me was the author's quite un-nuanced use of the US as an example of the success of protectionism, while ignoring that the US itself was the largest economic union in history. Given its continual wars with European powers, the only other major economic powers of the time, the US had many security and other non-economic reasons for protectionism. This is ignored.

I found it too hard to follow as a listen.

We all know that not all narrators are created equal and one listener's favorite is another listener's turn-off. For me Joe Barrett is in the latter category...but you may love to listen to his voice - I do not.

What was most disappointing about Ha-Joon Chang’s story?

I thought the structure of the story, didn't work for an audio book. Each "thing" is laid out as 1) What the thing is they don't tell you about capitalism 2) What "they" tell you 3) What "they" don't want you to know. This structure may work when you're reading the book, but for me, it just didn't work as a "listen"...I kept finding myself asking, wait, is THIS the "spin" part or the "truth" part. Maybe my level of concentration isn't up to the challenge of this book - but for me it just didn't work...I found it toomoved on to another book half way through.

The performance was fine I just didn't care for the sound of the narrator's voice.

Dissapointment...I was hoping it would be a more enjoyable listen.

Very informative and engagingly written. We need more of this sort of thinking in these troubled times.

great book which convincingly challenges traditionally economics. while some parts rely on anecdote, most is strongly supported by theory, and exposes economics for it's lack of scientific rigor.

It was a privilage to listen to this book

It is amazing how one book can summerize what has gone wrong with a global
economy in the past few decades.

It’s a must read for all the CEOs and CFOs and respective government officials all over the world. And it would be great as a textbook in all highschools all over the globe.

I do not share the opinion of the author that the things can be still turned around as it seems like capitalism is on a downward spiral now. And will end up in revolution. And in spite people like Gates , Buffet or Zukeberg greed is covering the eyes of the remaining 1%.
Yet having said that I strongly believe that building an understanding of that is going on , is the only chance of at least slight improvement.

thank you again for this book.

lucid, well-written and accessible to everyone interested in economics or development independently from their background.

awesome! one of the most inspiring and thought provoking books that I have recently read!