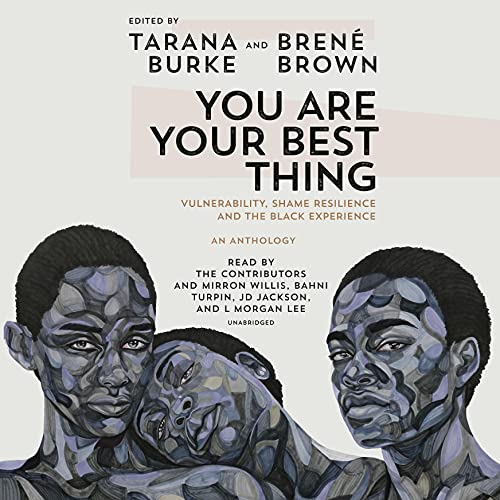 You Are Your Best Thing

New York Times Best Seller • Tarana Burke and Dr. Brené Brown bring together a dynamic group of Black writers, organizers, artists, academics, and cultural figures to discuss the topics the two have dedicated their lives to understanding and teaching: vulnerability and shame resilience.

It started as a text between two friends.

Tarana Burke, founder of the ‘me too.’ Movement, texted researcher and writer Brené Brown to see if she was free to jump on a call. Brené assumed that Tarana wanted to talk about wallpaper. They had been trading home decorating inspiration boards in their last text conversation so Brené started scrolling to find her latest Pinterest pictures when the phone rang.

But it was immediately clear to Brené that the conversation wasn’t going to be about wallpaper. Tarana’s hello was serious, and she hesitated for a bit before saying, “Brené, you know your work affected me so deeply, but as a Black woman, I’ve sometimes had to feel like I have to contort myself to fit into some of your words. The core of it rings so true for me, but the application has been harder.”

Brené replied, “I’m so glad we’re talking about this. It makes sense to me. Especially in terms of vulnerability. How do you take the armor off in a country where you’re not physically or emotionally safe?”

“That’s why I’m calling,” said Tarana. “What do you think about working together on a book about the black experience with vulnerability and shame resilience?”

There was no hesitation.

Burke and Brown are the perfect pair to usher in this stark, potent collection of essays on black shame and healing. Along with the anthology contributors, they create a space to recognize and process the trauma of white supremacy, a space to be vulnerable and affirm the fullness of black love and black life.

The preface provided by Tarana and Brené is critical to understanding the motivation for this book’s manifestation. It helps to improve your listening ear and is precisely what someone like me, a white person, must do with a book aimed at helping Blacks and POC; we just need to shush up and listen. These essays offer the opportunity to feel their specific experiences as it applies to the relatability of Brené’s body of work. Admittedly, Brené states her research and findings apply to every one, but knew it fell short as she only relates to it as a white woman. Here she has Tarana take the lead on bringing it to the Black experience. I hope it serves precisely the group intended. It’s important that we all get to benefit from Brené’s work.

I am humbled from what I’ve learned.

The stories in this book are all incredibly moving. Hearing the voices within this book has touched me deeply. It has exposed my ignorance and true lack of understanding about the depths of the pain that the story tellers hold. I am humbled. As I continue to educate myself and own my part of my ignorance I will continue to speak up and out when I encounter racism. I will listen more closely to those around me. I will continue to create awareness around my bias. Thank you to all the brave story tellers for showing me your authentic selves. I am so moved and inspired by your great wisdom and strength. These stories should be required reading for all of us. I am a better person because of the vulnerability of all of you. Thank you.

A bold reminder that I am my best thing

Thank you to all writers who went to the abyss and proved the only abyss is the one we create. Thank you for showing us we can pull back when we confront the abyss, dwell in it just long enough for us to understand its tendrils can only claim us when we refuse to learn from it.
This book is a gut wrenching awakening to know we are sick and the only way we will heal is by listening to ourselves and taking ownership of our vulnerability and our stories.
Loved every story. So many hit hard. So many have me hope.
With gratitude. I am my best thing.

Thank you! The essays were powerful! This leaves me wanting to share my truth and freeing myself of what holds me captive. Being vulnerable....
I plan to recommend this book to my trapped family members.

I have been moved to devastation by some essays. This book is that cathartic.

Just listen to it!

This book has been healing. It was a gift to listen to these words. I felt like I had intimate conversations with each of the contributors. There is something healing and cathartic about listening to someone’s story that is written and spoken by them. They were authentic, vulnerable, transparent and powerful. As a black woman, I feel like I have been in the presence of a community that understands me. I have already referred it to my circle. There is something powerful about hearing the voices. I am literally in tears, because my heart is so full. Thank you for creating this book that gives voice to important issues from our perspective. Thank you Tarana Burke and Beene Brown. I am my best thing.

This book was eye-opening, validating, intense and necessary. I am grateful for representation and voice of a population that needs to be known. Read it!!!

The life experiences were able to reach down into those deep places and open windows that we sometimes seal off. Every story was not me but every story had a piece of me. Could use a part two!! Bravo!!

I found this book to be very difficult. The preface lead me to believe the research of Ms Brown would be discussed from the black perspective. Several essays were in my mind focused on personal directed bias. All tho it was emotional and honest feelings research was not discussed except in one essay.

Loved everything about this book, and I'm sure will listen again so I can take notes. Huge thanks to all of the authors!