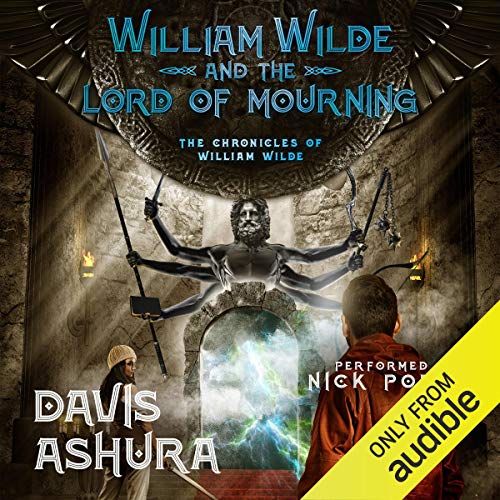 William Wilde and the Lord of Mourning

The finale to the Chronicles of William Wilde!

William and Serena struggle to recover from the devastation wrought upon their home by the forces of Sinskrill. They want nothing more than peace, but they have to fight on. They know that the war between the two islands, one spanning millennia, is reaching its denouement.

Both Arylyn and Sinskrill - magi and mahavans - prepare for the final conflict. Warriors are trained, readied for the battle neither side truly wants. Indeed, peace might even be a possibility if not for the Servitor, Serena’s father. He still rules Sinskrill and brings Sapient Dormant, the dread Overward to the mahavan home island to serve at his side. Worse, he rouses Salachar Rakshasa, an ancient demon who no one can truly control. Every man, woman, and child of both Arylyn and Sinskrill might pay the price for the Servitor’s zeal to survive.

Rukh and Jessira have their own troubles. Some of the magi no longer trust their leadership, but their wisdom and guidance is needed now more than ever for on the far-off world of Seminal, Shet is awake and readying his armies. And he has his own vengeance in mind.

Wow, the build up was worth it! Thoroughly enjoyed this and you will, too! Excellent action scenes and a good wrap up. I think this is the last book? But, I hope Ashura surprises me again and we get to follow more of the story!

bittersweet, but more bitter towards the end.

the ending felt lacking and it seriously made me want to rage. i didn't get a sense of closure. too many questions arose that won't be answered in the next series.

There was barely any William. They talked Adam up for the last 3 books, but he didn't even do anything. It was just about Rook, Jazeera and the Necrossed. The past/present/future incarnations of Rook & Jazeera stuff was also really stupid.