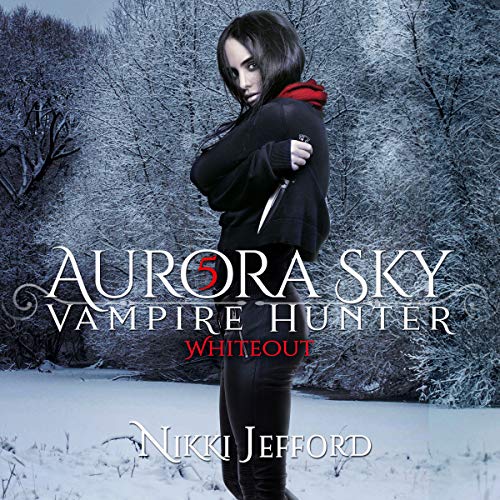 Life on the run is no winter picnic, especially when Aurora's partner sees himself as the sheriff, not the outlaw.

It's a cat-and-mouse game across the Last Frontier, with agents and vampires out for blood while Fane searches desperately to find Aurora before rogue vampires do.

The hunters have become the hunted. And the road to freedom has never felt more uncertain.

what in the world

This one e was horrible! The story went nowhere it was just a lot of fluff. and who was the male narrator he messed up the whole story. I will not be reading the next book.

PRETTY GOOD...BUT LEAST FAVE OF THE SERIES SO FAR!

Would you consider the audio edition of Whiteout to be better than the print version?

I think it always is!

What was one of the most memorable moments of Whiteout?

What does Em Eldridge and Sean Peck bring to the story that you wouldn’t experience if you just read the book?

I liked the narration..they bring the story to life!

I could have,but it only got really good the last couple of hours of the book...

I was super excited to listen to this, and was happy when I saw it finally was available! This story continues where book 4 left off...Dante, Aurora, and Giselle are on the run...thinking the agency was after them...and of course Fane is looking for Jos and Aurora...This book was a lot of them running and hiding, and Dante was kind of being a jerk...I have pretty much lost my like for Dante...I was a little bored at times....but all and all it was a good story...and I cant wait for #6!

Whiteout by Nikki Jefford is the fifth novel in a series called Aurora Sky: Vampire Hunter. Aurora Sky, her somewhat partner Dante, and an icy foe-turned-ally vampire Giselle are on the run in frozen Alaska. After getting away from a dangerous enemy vampire and uncovering that the clandestine agency that Dante and Aurora work for is corrupt, they fled, unsure of who was on their side. Dante wants to clean the agency of it corruption, while Giselle only wants to destroy her enemy. And Aurora is stuck between her two companions, while only wanting only to return to the man she loves. They travel the remote and frozen lands of Alaska attempting to formulate a plan and figure out a way to outsmart their enemies.

As this is the fifth novel in a series, I think any reader needs to read the previous books in the series for the plot to make sense. There was not much recap and I imagine a newcomer to the series would be confused, even with some of the details that are interspersed throughout the novel. I personally liked this novel less than the preceding ones. However, there were definitely positive aspects. Ultimately, in this novel Aurora is coming into her own as her post-hunter self. Also, Aurora’s and Fane’s relationship is finally clarified to the satisfaction of the reader. One aspect of this novel that is different from the previous novels is the added Fane’s point of view sections as he looks for Aurora. It was really interesting to see how he thinks. However, I struggled with the focus of the novel, I felt that the characters had a mission, but they kept getting side tracked with other vampires. A testament to the author is that these side tracks were ultimately moving the plot forward and contributed to the end of the novel seamlessly. But they weren’t presented as the main objective in the novel, which made them frustrating. I also didn’t like the dynamic between Aurora and Dante in this novel. The reader heard a lot of Aurora’s irritation toward Dante, but she rarely relayed that to Dante. This made it seem like she wasn’t standing up for herself at all. This might have been present previously, but because their relationship was such a major part of the story, it stuck out.

The narration by Em Eldridge was great as usual. There were fewer characters that she had to voice, but she was consistent with each character and consistent with their voices from the previous novel. Sean Peck narrated Fane’s point of view and did a great job as well. The voices were rougher than I heard through Em Eldridge’s narration, but this was easy to overcome. The production quality was good as well. I would recommend this novel to anyone who likes young adult paranormal vampire stories with a unique premise.

Audiobook provided for review by the author.

Where is the training?

For some who has been through training Aurora is pretty helpless. She can't shoot or fight. Aurora is disappointing as vampire hunter and main character.

Not the best in the series

I have been enjoying this series. There were some errors in this book, unsure if narrator or author errors, that were distracting and/or confusing. Also, I did not enjoy the male narrator. The normal narrator was great, as usual.

ready for the final book!

this has been a good series! I already have the last book downloaded ready to go!

I didn't like the voice of Fein. Sounded as if he was reading and you could hear every lips smack

I started the series and liked it. Not amazing but good. But the characters are getting to close to the twilight series. This book lost my interest. I feel like I know what is going to happen in the next book. ☹️

Please note this is book 5 of an UF series that must be read in sequential order. If you have not started this series yet, please see my review for Book 1, Aurora Sky, as the below review contains spoilers for the prior books.

For those of you who have been following this series, you know that it is our generation's audiobook equivalent of Buffy the Vampire Slayer with some interesting original twists and turns to boot. I have greatly enjoyed this made up fantasy world and the ride throughout these first 5 books with book 5, Whiteout, starting to set the stage for what will no doubt be a climatic ending to this YA/NA PNR/UF series that features vampires and those who both love and hate vampires, including vampire hunters and one very prominent secret governmental organization (whose true mission has been part of the suspense arc that has played a part throughout the entire series).

Whiteout starts off where Hunting Season leaves off. Dante, Aurora's agent partner and one-time boyfriend, has just learned that the agency seems to be corrupt with both its leader, Melcher, and Jared, who recruited Aurora, having some sort of devious secret agenda. Dante is devastated as he really enjoys being an agent and this truth is like a crushing blow to him leaving him wondering as to what to do with his future. He also initially refuses to believe that he too is the very thing that he has been fighting.

Aurora is also left in contemplation mode. Does she even want to be a vampire hunter anymore now that she knows the truth? Moreover, how can Aurora and Dante set things right at the Agency? And, in the love department, will she ever see Fane again? Or should she consider the renewed overtures by Dante who clearly is still interested in her.

As Dante and Aurora sort out their own personal feelings both for their careers and personal lives, they must also live on the run seeking shelter at remote hideaways. The fact that their apparent ally is now Giselle, also brings on additional angst. Can Giselle be trusted when she was their enemy just a short while ago?

And what is the Agency up to? Can Dante and Aurora get to them before the Agency finds them. And if they do, what will they do to them?

The narration in this book is performed by two narrators. Em Eldridge who has narrated the whole series until now on her own and a new narrator, Sean Peck (who narrates Fane's perspective). I've really enjoyed Em Eldridge's narration throughout the series and have really come to associate her characterizations with these characters who have now been involved in 5 books together, so it was a bit of an adjustment to move to two narrators as I wasn't as familiar with Mr. Peck's voicings for each character which required me to rely a bit more on dialogue tags. I also felt a few of his dialogues for Fane where a little more dramatic sounding than the character I've come to associate with him. Putting that aside, however, the dual narration works fine given the addition of some chapters from Fane's point of view (which had not been the case in prior books).

I did give Ms. Eldridge a 5 Star narration for this book because I felt that she has demonstrating remarkable consistency over the 5 books so far in this series. Moreover, I like her reading in that it sounds natural, bringing the story to life without excess drama than that called by the scene. Additionally, I really enjoy her timing and attention to details which really enhanced the story for me.

The production quality on this audiobook is also top-notch as the others in this series have been. And I found the sound quality in this book to be on par with audiobooks produced by the big audiobook producers.

My only reservation with book 5 from a plot perspective is that it felt like we were in a bit of a holding pattern. This is understandable as it is a later middle book in a sequential series. Fortunately, the end is near, and we do get a glimpse at some of the possibilities, although no firm decisions were made one way or another in this book.

I can't wait to see how Nikki Jefford wraps up the Aurora Sky series in Book 6, True North. It sort of feels like when a beloved TV Series comes to an end in the Series finale-- you are both eagerly awaiting it while at the same time sad that the story and characters you have come to know and enjoy will finally be over.

The further through a series you get the harder it is to write a decent review without giving away what happens. This is why I find myself saying things like "If you liked the first four books you'll like this one too", which is true in my opinion but is probably not very helpful but about all I can offer without being so vague it's annoying or making my review a spoiler.

Em's narration is as consistent and awesome as always, her characters voices have remained the same through all of the books and there's no change to that in this one.
Sean's narration is a bit jarring at first because I was so used to listening to Em. He has a nice voice but his female voices aren't very convincing.
The voices Sean uses for the characters are so different to the ones Em uses that you really have to pay attention to who is talking during the sections Sean does, but I'm not sure there's anything either of them could do about that.