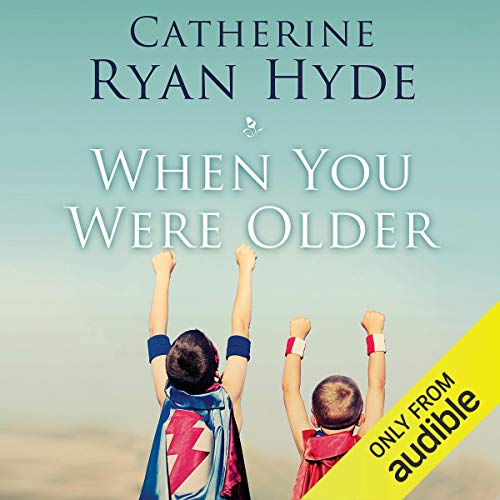 When You Were Older

By the best-selling author of Don't Let Me Go and Pay It Forward, When You Were Older is the heartrending, thought-provoking, and life-affirming story of two very different brothers who try to build a new life together against the backdrop of an uncertain and uneasy time in our shared history.

Russell Ammiano works on the 104th floor of the World Trade Center. On the morning of September 11, 2001, the phone rings while Rusty is rushing to work. The news is devastating: his mother has died of a stroke, leaving his brain-damaged older brother, Ben, alone. This news also saves Rusty's life. He's still at home when two planes hit the World Trade Center--and only one of his friends and colleagues survives.

In a single day, the life Rusty built in New York crumbles to the ground. Rusty returns to his tiny hometown and the brother he was more than happy to leave behind. Ben hasn't changed a bit, but the town has. Tensions are running high in the wake of the terrorist attack while Rusty struggles to put the past behind him and care for the exasperating brother he loves. He finds refuge in drinking coffee in the early morning with beautiful Egyptian-American Anat in her father's bakery. Rusty is beginning to get his life back...until one awful night threatens to take it all away again.

"A fantastic read which will have people talking about it for many weeks and months to come." ( Sarah's Book Reviews)
"The award for the amount of humanity woven into a book goes to Catherine Ryan Hyde." (Ivana of Willing to See Less)

Ce que les auditeurs disent de When You Were Older

Just when you think you've heard it all..

This is yet another one of Ms Hyde's perfect stories of imperfection in the real world. This is the world right after 9-11-2001. She hits the nail on the head again. I can never stop her books, they are better than any good movie. Lots of insightful wisdom sprinkled in too.

The narrator was incredible, even doing female characters. The story was very good. I highly recommend this Catherine Ryan Hyde.

I enjoyed listening to this audiobook. The reader was very good and the story stayed interesting throughout the whole book. I was disappointed when it was over because I felt like I wanted it to go on.

nine 11 turns a young man's world upside down when he returns home to be sole support of an older intellectually handicapped older brother. it causes the young man to grow in understanding of how preconceived beliefs affect lives. an intense plot that keeps you guessing.

I've now listened to about five of this author's books on Audible and they just get better and better! The stories are so moving and I just can't say enough good about them. She has a wonderful way of weaving the plot and keeping you interested. In this case, the story centers on the 911 terror attack. Since I lived through that in a very personal way, I was deeply touched by the way she portrayed it. You won't regret buying this book and reading or listening. It's a great human story that carries you along as the characters discover how their lives are forever changed.

What a gem. Such a poignant story. I thoroughly enjoyed it from beginning to end.

Loved this book. I felt for the characters in the book and read, well listened (love you Audible), every second I could. An absolute page turner and must read!!!!! Kudos to another great book by one of my favs-Catherine Ryan Hyde! YOU are AMAZING

I loved the story. It will make a great movie. I expect I'll come out as a film. I listen to lots and lots and lots of audible books. This is one of the best performances I've ever heard. I loved all the different voices it added so much to the great story.

More please! One of those books you never want to end! Narrator was great as well!

I always enjoy Catherine Ryan Hyde's books because I feel like a member of the family of characters.