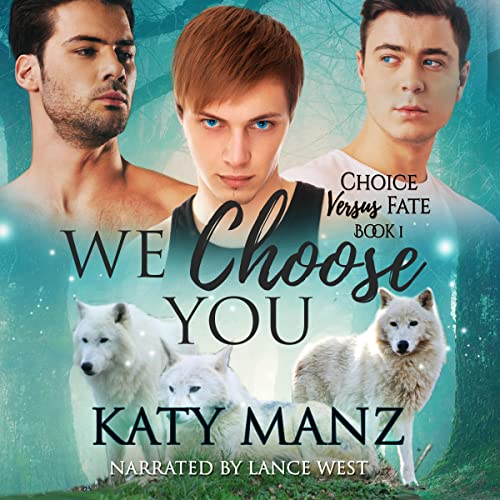 James and Aidan didn’t need fate. They had each other.

Alpha James and Beta Aiden love each other and don’t care what fate has to say about that. Mating doesn’t need to be based on pheromones and scents. And kids? There were many ways to build a family.

When fate comes knocking years later, James does what any wolf in his situation would—he runs away. He has a mate he loves more than anything, and they’re just about to get everything they want: a family. He can’t risk losing everything because fate decided to be a butt.

Omega Riley scented his fated mate once months earlier, and the wolf ran away. He is coming to terms with his singledom. Everything is going as well as it can, that is, until his fated mate’s children walk into his classroom.

We Choose You is book one in the sweet with knotty heat MM shifter mpreg romance series: Choice vs. Fate. It features an alpha wolf shifter who mated his beta best friend, the omega sent by fate, true love, twins who will steal your heart, adorable babies, and a guaranteed happy ever after.

I liked the overall storyline and idea of the story. It’s a cute and quick sweet book. The writing was a bit too formal at times but overall a cute listen.

a quick but fun read

This is a quick read but also a fun one. The main characters, James, Aiden, and Riley, are so sweet together and their HEA was satisfying. Can’t wait to read more from this series. The narration by Lance West very easy to listen to.

I loved this story when I read it. I was very excited to be able to listen to an audio version of the story. This certainly didn't disappoint on the delivery or storytelling. A very good listen. This narrator was new to me and at first, I wasn't certain. However, he really grew on me and bought these three to life. I am eager to listen to the rest of these books and hear more about this group that is forming. If you are looking for a short sweet low angst listen with family and all the feels, this is certainly worth your while to check out.

nice characters, storyline, and the concept with the kids is interesting. I'm looking forward to listening to the next book. The narrator did an awesome job with the voices.

for such a short story there was everything...love, heartache, cuteness, sexy times, insecurities, development and most importantly a happy ending 🥰

I loved everything about this audiobook!! I read and reviewed the ARC of this book not too long ago but something about the narrator brought it to life in a whole new way! It was easy to decipher when different characters were “in charge” and the love scenes didn’t sound cheesy being verbalized! Great overall!

What a sweet little novella. I am a fan of the whole fated mate trope but this book gives it a whole new spin. I loved it! James and Austin are completely in love and at first the idea that James has a fated mate is a shock. But as they both get to know Riley, they realize that all 3 of them make a perfect family. The narrator is new to me but he has a good voice.

This was a sweet, short and steamy MMM romance. Alpha James and Beta Aiden have been together for years, when they decide they want to adopt. They are chosen mates. James scents his fated mate in Riley, the kids new teacher. This was really good. Overall, a great listen! The story was really well written, the pacing was smooth, highly recommend. Lance West did a great job with the narrations. He was easy to listen to. Overall, well done, a great short and steamy story!

A Different Take on Fated Mates

I enjoyed this different take on fated mates. It was nice to see that shifters can have a fated and a chosen mate. It was short, but I wish it was longer! The narrator did a great job as usual. I am looking forward to the next one in the series.