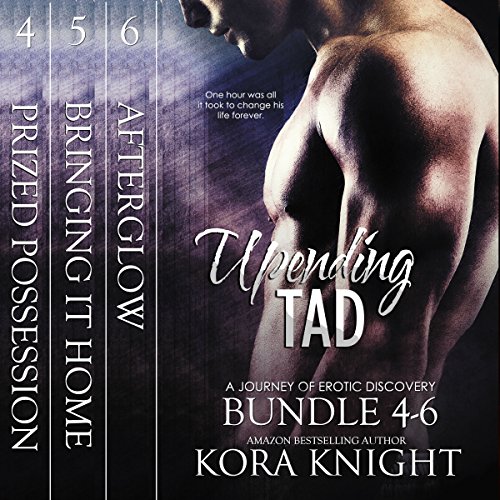 Volumes four, five, and six of the Upending Tad series:

It's Friday night, and Tad finds himself doing pretty much what he'd expected. Celebrating with his friends at a night club in honor of their buddy Breck's birthday. Until Scott and his own crew show up. Tad can't seem to keep his eyes off him. Unfortunately, Scott out in public with other attractive men is a much different story than Tad's used to. As one disturbing event after another unfolds, things go from bad to worse. Can Tad find it in himself to make peace with Scott's past so they can finally head into the future?

Epilogue installment, filled with playfulness and promise, laughter, and love. And, yup, some of that hot stuff, too.

I love this story. Read and reread. Then even better with narration by Michael Pauley.

When two guys meet one straight and the other gay — love does enter and I am hooked .
Kora Knights words and Michael Pauley’s narration this audiobook wins hands down .

By now you have already read Books 1,2 and 3. So, you already know that at least 90% of the content will be sex scenes. And so it is. The scenes are unique and over the top sizzling.

The dialog between Tad and Scott is hilarious, with power trips, cuteness, sensitive moments, romantic, sweet come backs,... OMG... couldn't get enough! And, with Michael Pauley it is so realistic... with the variations in tones... the cries... the laughter... the sobs... the sexy sounds during you now what... UNF'NBELIEVABLE! Paulley has got to the one the best narrators out there! I should know, I go through a book every two days. He's by far, one of my favorites!

Now that the characters are more developed, and you're on Book 4... the story starts to build more. The books have more substance outside of the sex scenes.

By now you already know that Tad did not know he as gay. So, there's lots of issues to be addressed... and they get addressed. The story develops and there's other stuff going on outside of sex scenes. The books also has great side characters with different issues.

Kora Knight is an astounding author... her way of writing never repeats... and there are so many moments in the book that take your breath away. How awesome is that? Isn't that what we want?

These books are highly recommenced (the 4th one is my personal fav) and definitely a keeper in my library.

Such a great series!

One of the best series ever, and narrated by Michael Pauley? Yes, please! Start with the first bundle...

I am enjoyed Bundle 2 more than Bundle 1. There was a little more substance to characters and their relationship relationship, but not a whole lot. I would’ve like to see the MCs struggle a bit more working things out. Narration was outstanding, and I’m amazed at Michael Pauley’s talents.

Love these books. Buy I do kinda want more. It's hot and heavy and lots of hot stuff. Just wish for a bit more of a story line.
Very enjoyable listen.

If you like M/M romance, this one is a must have! One hot bundle. Michael Pauley was one hot narrator. He brought it to life in my mind.

This bundle of stories definitely needs to be read after you've read/listened through the first bundle, as these follow after one another.

The emotions are growing between Tad and Scott. Although Tad is starting to realize he wants to be with Scott, his fears of being openly gay/bi are holding him back. And Scott, although we don't see his POV in any of stories 1-5, is clearly crazy for Tad but is also reaching his breaking point.

The two of them together are just off the charts ridiculously hot, and the narrator is just perfect at bringing these two to life. I love the emotion he can convey between the two characters and their scenes together. I love me some Tad and Scott. The final story in their collection is just the best fluffy, sexy epilogue for these two. Can't wait to start Max and Sean's story and then Kai and Breck.

If you are looking for crazy hot erotica with a bit of kink, I would definitely recommend this series!

This book was awesomely good. Loved the hot steamy sex almost as much as the storyline. The connection Tad and Scott had felt incredible. I loved how Tad’s character was written. We got to experience him coming out of his shell in every way. And feeling Scott and Tad fall in Love was breathtakingly beautiful.

Best series I’ve read this year. Definitely a re-read for me. Best purchase too.

Michael Pauley is Phenomenal in his delivery. He gives 110% every time.

As good as expected

After I binge listened the first 3 volumes I just had to get the other three. Loved it and couldn’t stop until I was finished. Michael Pauley brings the story to life so you can laugh, cringe and blush with Tad and Scott. Awesome job!