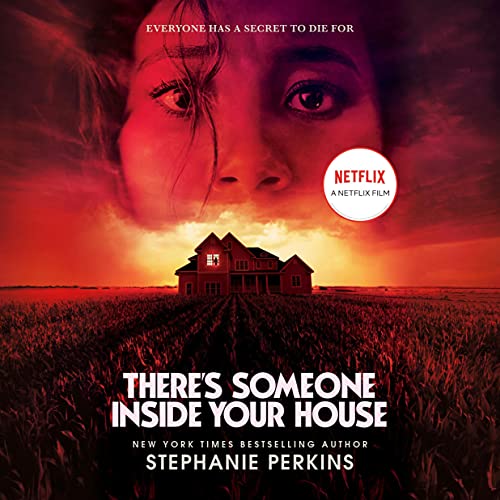 There's Someone Inside Your House

It’s been almost a year since Makani Young came to live with her grandmother and she’s still adjusting to her new life in rural Nebraska. Then, one by one, students at her high school begin to die in a series of gruesome murders, each with increasing and grotesque flair.

As the body count rises and the terror grows closer, can Makani survive the killer’s twisted plan?

"A heart-pounding page-turner with an outstanding cast of characters, a deliciously creepy setting, and an absolutely merciless body count.” (Courtney Summers, New York Times best-selling author of Sadie and The Project)

I'll start by saying that I have mixed feelings about this book. On one hand, I listened to it almost every chance I got and became truly invested in what happened and to whom. The writing was beyond decent and the characters were well developed. But it was still just &quot;okay&quot; to me. The story itself seemed well thought out and definitely kept me guessing who it could be. But at the same time, it was a little too over-the-top. Especially when we finally find out about the main characters entire back story, I almost laughed. It just seemed way out there - like, would that particular situation really cause her to go to the extremes she had to?

I think a large part of my feeling all boils down to the narration. Though not bad by any means, Turpin's voice just didn't suit the material. And I think that would have made all the difference. At least, in my opinion. The main character came across as whiny at times and other times there was no character distinction at all. But I could've dealt with that had there been even a small modicum of suspense in her inflection. That's what was missing, I think.

All in all it was an entertaining listen. Definitely worth a credit for those who are debating.

Have you ever wanted to like something more than you did? That’s how I felt about this book. I absolutely loved the idea — YA Slasher Novel. How cool is that!? It’s like SCREAM. But in the end, the story was not what I expected. It was scary, wasn’t really thrilling, and I felt like the killer reveal was the most lack-luster reveal I ever did read. We find out who the killer is 1-2 hours before the audiobook ends and the reason for his killing was definitely YA-like. I just didn’t think it was imaginative. I think it’s because I grew up with slasher movies and loving the theatricality of them. I have never really read a slasher book, so I expected deeper content and more significant storytelling (I Know What You Did Last Summer wasn’t at all like the movie, so that doesn’t count)—I just felt like the writing was a novelization of a 1999 PG-13 movie that bombed at the box office.

This wasn’t a great story, but it was a very fun listen. I stayed interested in the outcome of the mystery until the very end. It wasn’t as scary or heart pounding as I’d hoped, though. It was gruesome in a cartoonish way. The writing didn’t really put me in a mental space to visualize the murder scenes as I’d hoped. It was more like watching a silly adult cartoon that ends in ridiculously overwritten butcher scenes.

I was more than a little frustrated with the main character, Mikani. I’ve never read anything by Stephanie Perkins before and know nothing about her. Thus, I do not know her background or ethnicity. I do not know if she’s ever written a black character before. Mikani, who was biracial (black and Asian), read like a stereotypical white teenage girl in a slasher movie. It’s only mentioned a few times that she’s “different” and never explained why her grandmother, a black retired teacher, lives in an all white town. They were basically white characters with brown skin. That was disappointing. Not that I think the writer should’ve made Mikani or her grandmother stereotypes of the black community, I don’t. I do, however, think that Ms. Perkins believes that the only thing that makes black and white people different is their hair. The story doesn’t recognize cultural differences at all. It’s as if race doesn’t exist in this small Nebraska town.

The body count was high. The final scene was done very well. An epilogue would’ve been good, but all in all the story was good.

It left my on the edge of my seat. Highly recommend. Hope this turns into a movie

After getting to a few chapters to the end of the book I decided to read the reviews. I saw a negative one and I have to disagree with them. I have to say this book was very well written. The author did a great job keeping the reader on their toes throughout the entire book. I felt like I was always waiting for the next scream scene. It didn’t get super deep into different characters in order to keep you anticipating what was coming next. I’m really hoping she will write another book!

Terrible Book for this horror fan.

I enjoy novels involving urban legends. But expanded characters. The characters in this book were as deep as paper dolls. It may be enjoyed by very YA crowd. I doubt it though.

Waste of a valuable credit

I was unable to suspend my disbelief. It started out good, but rapidly went downhill. The number of murders and circumstances surrounding them were just not believable.

No one could stop the killer? They could kill at all times of day and night with crowds of people around and yet go unnoticed? Even given insurmountable odds they continue to rack up a body count? The police were non existent. No one could EVER get a cell phone signal. I fast forwarded through parts of it because I was so annoyed.

The narrator was the only bright spot in this book.

Great book…narrator not so much

The story itself was AMAZING! The narrator for me was hard to listen to, but if you are able to deal with it and focus more on the story than you will not be disappointed!

Not bad for a YA thriller.

I was skeptical at first, but I continued further into the story it turned out better than I expected. A nice read for the Autumn season 🎃😊