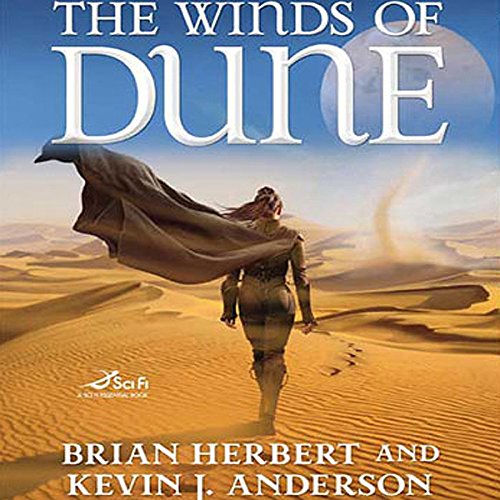 The Winds of Dune

Jessica and Gurney are on Caladan; Alia is trying to hold the Imperial government together with Duncan; Mohiam dead at the hands of Stilgar; Irulan imprisoned. Paul's former friend, Bronso of Ix, now seems to be leading opposition to the House of Atreides. Herbert and Anderson's newest book in this landmark series will concentrate on these characters as well the growing battle between Jessica, and her daughter, Alia.

good, but with reservations

I have listened to most of the other Dune books and I have enjoyed them immensely. I bought this book hoping it would be just as good., but was a little disappointed. It still was a good book, but it seemed a little contrived. I felt this book tried to fill in some of the history that was left to the readers imagination. It changed my conception of Paul Atreides from being a horrible despot to a do-gooder just stuck in a bad situation. The fun of reading is to use your imagination and I felt my own interpretation of what happened was more realistic than this book portrays. The book still had all the excitement and adventure of the other books and I did enjoy it.

I love Frank Herberts Dune and Ive read ALL of his sons dune books. Frank Herbert was a genius and had profound insight into human nature and esoteric philosophy. His son doesn't write Dune stories, he writes about about Dune but to an 8th grade audience. Characters conversations in his fathers works accentuated the deep essence of human potentials without hammering you over the head, they were subtle like zen koans. His son has to prove to the reader that you are indeed reading a Dune story because he is constantly referencing real literature by his father. Ive wondered what it might be like to walk into a fine china store and smash everything with a baseball bat, well after reading this crap..I know. Oh gurney Halleck was sad.. Ohh Jessica was sad cause Paul walked into the dessert, and he has to remind us that Duncan was drunk in front of her, so what!!! None of his crap moves any new story along and its not even intriguing. These two authors are only writing to the dumbest people in the crowd, they assume that no one can remember anything, literally half their god damn books are review of what just happened with no new insights, just repetitive drivel. Sure they have a few novel ideas in their earlier works, but those dont carry a saga. In any given conversation two characters will be talking about the same thing that that reader already knows, and lord is the dialogue dull. There is nothing interesting said by anyone ever in any their books! These two fools are just making a living by ripping off Frank Herberts legacy. I really cant say enough about how horrible and boring the writing is. There is nothing to make the reader think, they merely describe superficial observations about real insights that were actually experienced in the original Dune books. So if your an idiot and you like being spoon fed mundane repetitive stories completely devoid of thought provocative dialogue then Brian Herbert and Kevin Anderson are your authors. Rest in peace Frank Herbert

I have stopped downloading any books narrated by Scott Brick. I would rather read the hard copies than suffer though his stilted and affected version of reading. He seems to have a big following which is not shared by all the reviewers on Audible. His inflections and tonal qualities are very repetitive and annoying, seems to end most sentences with explanation points and is more concerned about the importance of his voice than the actual story line or characters in the stories. Many great authors and stories on Audible have been ruined by having Scott Brick narrate them.

dune book as polished as the first gen books. this pair of authors have a dune novel as readable as any of the dune series..

More than expected, even for dune standards.

The characterization, story development, and callbacks more than exceeded my expectations. In these intermediary books between the main story, the goal is to give more details but this went far beyond simple characterization and details. Its a great book that expands the universe and gives us more stories about the characters we love.

After Frank started the epic journey Brian and Kevin finish it all with an incredible body of Dune works. Bravo to Scott Brick as well.

a great expansion of the original story. a nice set up between Messiah and children.

it filled in a lot of history.
I couldn't stop listening.
The performance of the reader was great.

Great book in the continuation of the Master saga; Interesting as more on Dune, IX, Lady Jessica and the Face Dancers are explain