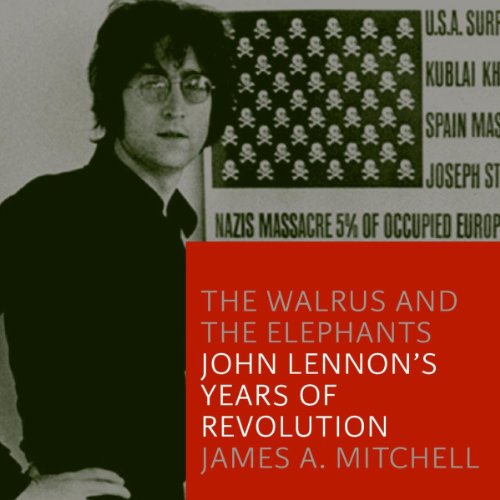 The Walrus and the Elephants

Finally, a John Lennon biography that takes a serious look beyond the man’s music and childhood and into the strange figure that stalked the civic hangover of the 1970s. Performed by the mature, rich voice of veteran actor Stephen Hoye, this audiobook by James A. Mitchell takes up where the Beatles left off: The moody philosopher-musician in New York hawking political causes and suffering the scrutiny of a frightened U.S. government.

Drawing on exclusive interviews with key figures ranging from Gloria Steinem to Ron Dellums, the book is a portrait of a time and a young man who served as a sometimes reluctant hero for so many. Lennon once sang that he did not believe in much - but many believed in him.

In late 1971 John Lennon left London behind and moved to New York, eager to join a youth movement rallying for social justice and an end to the Vietnam War. Lennon was quickly embraced by radicals and revolutionaries, the hippies and Yippies at odds with the establishment. Settling in Greenwich Village, the heart of Manhattan's counterculture, the former Beatle was soon on the frontlines of the antiwar movement and championing a range of causes and issues.

Seen as a savior by a generation in need of cultural heroes, Lennon was just as passionately hounded by a government eager to find enemies within. The FBI and White House considered Lennon a threat; a plan was devised to deport the singer prior to the election as a "strategic counter-measure" to preserve Richard Nixon's presidency in 1972.

The Walrus and the Elephants is told by an unlikely cast of friends, including the musicians of the Elephant's Memory band, who were among the few with a chance to see the man behind the Beatle. Exclusive interviews include writer and feminist leader Gloria Steinem; congressional Black caucus cofounder Ron Dellums; "Chicago Seven" veteran Rennie Davis; immigration attorney Leon Wildes; and legendary poet-activist John Sinclair, whose imprisonment for marijuana - a 10-year sentence for two joints - kicked off Lennon's American journey.

It was a busy year of making albums, controversial TV appearances, and what would be Lennon's last full-length concert at Madison Square Garden; it was also a time of great change in America, with many of the confrontations that began brewing in the sixties reaching an end...and the beginning of a new era.

John Lennon fought for peace and was treated with scorn by some, suspicion by others - including a government wishing to silence the singer. The Walrus and the Elephants is a look back by those who fought the fight. He was a dreamer, but not the only one.

I wish you were still here

As a teenager in the 1970's, I was never a Beatles fan (I was more into the Stones), but some of John Lennon's post-Beatles music, such as "Mother" and "Imagine", made such a strong impression on me because they sounded like they were coming right out of his very personal inner self. But I was a bit too young then to know exactly what was going on politically. This book filled me in with the information on the cultural and political background in America that Lennon walks into at the time and vividly depicts how he lived through the period and influenced many people (to the point that Nixon was afraid of him). Sure, as a former Beatle, it was probably easier than anyone to make a difference in the world, but he didn't have to do any of the things he did. His attempts to get involved and make a difference even in the local community levels appeared sincere and are consistent with his music. I am glad someone wrote a book about this period of Lennon's life.

John Lennon. Man of this World

I finally have explored this Era of Lennon. turns out, it's possibly even more timely now than when this Book was first Published

I have read many books on the subject and was pleased to find the targeted insight into John Lennon, Yoko, and Elephants Memory detailed like no other. A welcome addition to my love of Beatles history.