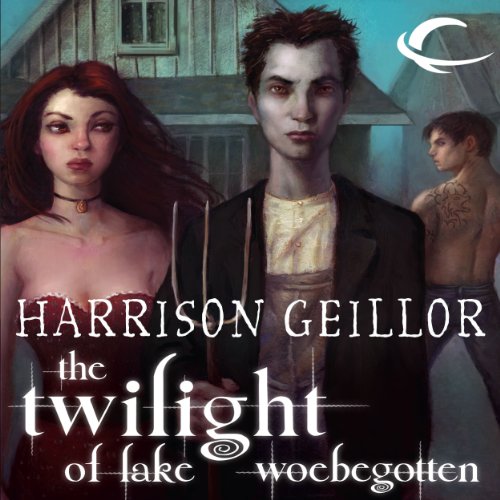 The Twilight of Lake Woebegotten

Eileen Stevens gives a low-key performance of The Twilight of Lake Woebegotten by American writer Harrison Geillor. Her husky voice and deadpan delivery lend the satirical material an air of seriousness. Heroine Bonnie Grayduck leaves Santa Cruz, California, for Lake Woebegotten, Minnesota, where she meets the mysterious hottie Edwin Scullen. Edwin’s secret? He’s a vampire, like the rest of his family, but he’s after Bonnie’s affections rather than her blood. Joachim Noir, a werebear, is also sweet on Miss Grayduck. Though there are many dangerous creatures roaming about in this send-up of the popular Twilight series, it appears that klutzy Bonnie is the biggest monster of them all.

A small town...a plucky heroine, a shiny vampire, and a hunky Native American rival with a secret. But all is not as it seems in Lake Woebegotten. Let Harrison Geillor reveal what lies beneath the seemingly placid surface. You'll Laugh. We promise.

When Bonnie Grayduck relocates from sunny Santa Cruz California to the small town of Lake Woebegotten, Minnesota, to live with her estranged father, chief of the local two-man police department, she thinks she's leaving her troubles behind. But she soon becomes fascinated by another student - the brooding, beautiful Edwin Scullen, whose reclusive family hides a terrible secret. (Psst: they're actually vampires. But they're the kind who don't eat people, so it's okay.) Once Bonnie realizes what her new lover really is, she isn't afraid. Instead, she sees potential. Because while Bonnie seems to her friends and family to be an ordinary, slightly clumsy, easily-distracted girl, she's really manipulative, calculating, and power hungry, and not above committing murder to get her way. Or even just to amuse herself.

This is a love story about monsters...but the vampire isn't the monster.

Not A Bad Deal At All


I think in order to appreciate Mr. Geillor’s storytelling one can’t take the source material too seriously. I’ll say upfront that I am not a fan of the Twilight series, and I imagine that diehard fans would not enjoy this send-up of their beloved story. It’s less a love story and more a dark fable about power and seduction, lies, secrets and manipulation. And while the story is funny, it’s not as funny as “Zombies of Lake Woebegotten,” and it is more sarcastic than laugh-out-loud hilarious. This story is dark and the primary character, Bonnie Grayduck, is rather unlikeable, not because she is bland and under-developed, like the character in the original story, but because she is a self-professed monster.

Geillor, whoever he or she really is, can write, and he wrote the heck out of these characters. He took the source material out of the young adult world and placed it firmly in the adult world. He took trite characters, twisted them up, and gave them characteristics that made them interesting. He plotted this story not so that one thing happens, and then the next and the next, although that does happen, but the plot unfolds through the characters and the consequences of their actions. If you read “Zombies” then you’ll remember Principal Levitt. He reappears in this story, and who he is, is important to the story because who he is drives his actions and his actions have serious consequences. Things don’t just happen to Principal Levitt and he doesn’t just respond.

Finally, I have to wonder if it is “Ms.” Geillor, and not “Mr.” because while the story is dark and violent there are a number of observations that are straight out of a feminine experience. I think women are less afraid of their own dark sides, and we know how and when to hitch on a smile and play along in order spare someone’s ego or avoid a conflict when what we really want to do is burn something to the ground. And maybe I just like the idea of this kind of story being written by a woman.

Eileen Stevens did an amazing job narrating this book, especially the voice of Bonnie, but… I did miss Phil Gigante’s baritone. He would have been wonderful as the Narrator, especially in Garrison Keillor mode.

Good for Entertainment… A Little Drawn Out

I like that the story was pretty decent as twilight satire and the narrator tried to perform a Minnesota accent which wasn’t bad. I thought the main character of Bonnie was a little shallow. I didn’t believe her so much as a psychotic murder then a villain in an old comic book shouting they must have more powers to take over the world. In the vein of twilight though, it wasn’t awful.

Knock off story ! With a twist.

Start out good. Like how they change name. Bunny was way better then intentionally main character of the other story we all have read. Just toward the end . Just really figure out what story they trying to come up with.

Basically if the Twilight plot holes had been addressed

I don’t know how to feel about this. It strays from the source material just enough not to be considered plagiarism but it’s not so inventive it’s its own story. I expected a silly funny story poking fun at twilight. Aside from the name changes, it’s not. It takes itself just as seriously. Even though it’s a better story, I like Bonnie even less than I do Bella. Bella was a hollow shell for readers to insert themselves into but she was also inconsiderate to everyone but Edward. Bonnie is a manipulative narcissistic predatory psychopath who doesn’t care about anyone but herself and Edwin a pushover. When I dislike the main character, it’s hard to get invested in what happens to them. I think this was free so this was overall an ok experience. The narrator did a great job making me want to keep listening.

I you are familiar with the world of Lake Wobegone you can get the most out of this book. To understand the Twilight elements you only need to watch the first movie.
For example, one of the funniest things is the reasons why vampires stay out of the light. It’s funny enough that they sparkle in source material, but it it is for another reason. You wouldn’t find it as funny unless you knee that Twilight vamps sparkle.

If you only know Twilight you can still enjoy this. To get the most out of it listen/read the first Lake Wobegone book. The Google machine can help.


There are also some grim parts. The sort of thing you’d run into in a season of Fargo.

The performance is very good. You can distinguish the characters. The Minnesota rural accents are pretty accurate. I live in Minnesota so I know decent MN accent when I hear it.

Just a blah, nothing happens

Blah. Nothing happens. I had to quit listening. It's free to me, but not worth trying to get through.

Great narration, creative story and angle.
My only big complaint is that multiple chapters were duplicated back to back.

A tile for this.... TWISTED

this was definitely the most twisted book I think I have listened to in a long time. Man they really make Bella evil but in a very enjoyable way that makes you want to find out just exactly what the heck she's going to do!

definitely one of my favorite books of the year

I'm honestly surprised by how good the writing is. My only complaint is that Paul Reubens was in Buffy the Vampire Slayer, not the Lost Boys 😂

Now, given this book does at a point take a meandering Left Turn into different pastures, so the story begins to follow an independent storyline, but at the start of this book, it reads more like ‘Fan Fiction’ (aka same storyline events and characters), than an independent book.

I have to say that I’m definitely disappointed in any author who feels that he has to mimic another’s author’s work in order to write their own book.

After the story began to diverge itself from the Twilight Series storyline, it of course, could stand on its own and was a pretty strong storyline in itself, which makes the start of this book all the more sad.

All said and done, it’s an interesting book if you can get passed the initial Twilight beginning (and to name the book using the Twilight name seems like a thumb its nose at copyrighting move). This is definitely my last book reading by this author, which is too bad, as he is a good writer. If only he wrote just his own material, without relying on someone else’s work. As a want to be writer/author, I just find how he started this book, as extremely offensive to the original author’s time, and efforts, and most of all to his created work.

“Imitation is the highest form of flattery.” ..I would imagine this is the case, right up to the point where some bozo decides to steal your written work, change a fee things, and then sell it as their own to make a profit off it! Right about that moment, I would presume One’s tolerance of someone else basically stealing Your story, would be a LOT LESS about being flattered and a TON MORE about being P.O’d and suing them for copyright infringement!, at least it would be in my book.