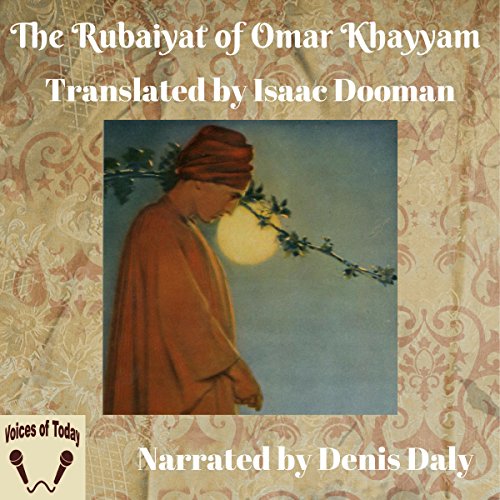 The Rubaiyat of Omar Khayyam

Isaac Dooman (1857-1931), clergyman, traveler, and linguist, was born in Iran. For 25 years he served as an Episcopalian missionary in Japan and later moved permanently to the United States. One of his four children was Eugene Dooman, who became an influential diplomat and who had a significant role in wartime negotiations between Japan and the USA.

Dooman's translation of the Rubaiyat, containing 180 quatrains, was first published in 1911. It has a roughhewn quality, reminiscent of the style of an earlier American translator, John Payne, who published a collection of 845 quatrains in 1898. In the introduction the translator writes:

"Omar has expressed the inner and hidden thoughts of the individual man in such an unmistakable language that the simplest of human beings can recognize in them his own yearnings and aspirations. There is not a single quatrain whose sentiments have not been expressed by every man and woman living - if not in public, then assuredly in private. Just here is the point of Omar's unique grandeur - he has revealed the innermost thoughts of our nature in a manner that no other writer, ancient or modern, has ever succeeded doing.

"How far the present translation will be found successful in familiarizing the reading public with the true language of Omar's quatrains, it has to be left to the judgment of the individual reader. All that the translator wishes to say is that he has spared no effort in selecting the most genuine ones and giving them an English dress that Omar himself might have mistaken for the real Persian."