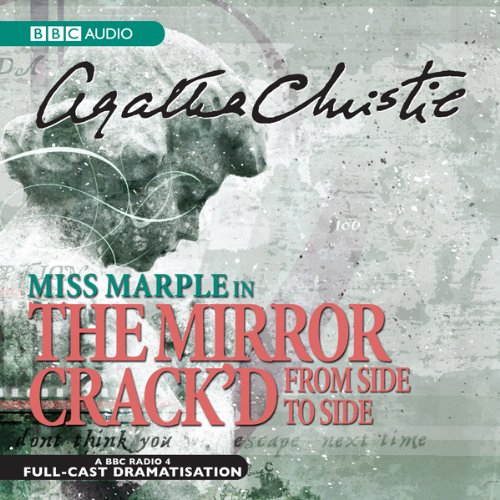 The Mirror Crack'd from Side to Side (Dramatised)

After the death of her husband, Dolly Bantry sold Gossington Hall to the former film star Marina Gregg and her husband. When the glamorous couple decide to throw a benefit party for the local hospital, the grounds are thronged with curious visitors, and for one of them, the day ends in tragedy.

As Marina is serving cocktails in the house, she is cornered by the excitable Heather Babcock, who chatters away about their former meeting about eleven years ago before spilling her daiquiri all over herself and Marina. Ever the gracious hostess, Marina offers her own untouched drink to Mrs Babcock - only to look on, horrified, as the lady dies in front of her.

It is up to Miss Marple to find out who was really meant to take the poison that killed poor Heather Babcock. Could it be that Marina Gregg was the intended victim? If so, Miss Marple’s task will not be an easy one, for the lady had an unusually large number of enemies...

Agatha Christie’s perplexing mystery is dramatised with a full cast, including Ian Lavender, Gayle Hunnicutt, and James Laurenson, with June Whitfield as the sharp-witted spinster sleuth.

I adore Agatha Christie and this book is no exception. The audio dramatization is great and the whole team of narrators did this work justice. I was enthralled and loved every second.

The narrator is not understandable to me. I do not want to finish this book

If you could sum up The Mirror Crack'd from Side to Side (Dramatised) in three words, what would they be?

What other book might you compare The Mirror Crack'd from Side to Side (Dramatised) to and why?

Maybe another agatha christie book. The only book that could even compare is another of her works. But possible Sherlock holmes would be a good choice too.

Voices that bring the story to life that usually can't happen as easily when reading the book.

When the murder was solved.