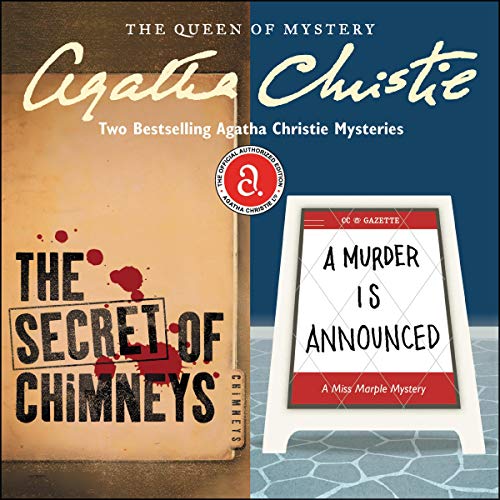 The Secret of Chimneys & A Murder Is Announced

The Secret of Chimneys & A Murder Is Announced

What is The Secret of Chimneys? A young drifter finds out when a favor for a friend pulls him into the heart of a deadly conspiracy in this captivating classic from Agatha Christie.

Little did Anthony Cade suspect that an errand for a friend would place him at the center of a deadly conspiracy. Drawn into a web of intrigue, he begins to realize that the simple favor has placed him in serious danger.

As events unfold, the combined forces of Scotland Yard and the French Sûreté gradually converge on Chimneys, the great country estate that hides an amazing secret....

A Murder is Announced in a small-town newspaper advertisement - and Miss Marple must unravel the fiendish puzzle when a crime does indeed occur.

The villagers of Chipping Cleghorn are agog with curiosity when the Gazette advertises, “A murder is announced and will take place on Friday, October 29th, at Little Paddocks at 6.30 p.m.”

A childish practical joke? Or a spiteful hoax? Unable to resist the mysterious invitation, the locals arrive at Little Paddocks at the appointed time when, without warning, the lights go out and a gun is fired. When they come back on, a gruesome scene is revealed. An impossible crime? Only Miss Marple can unravel it.

Emilia Fox is absolutely terrible. When she reads normally she's fine but when there's dialogue, it's painfully annoying. Took away from the story. But Hugh Fraser is amazing as usual. Enjoyed his narration immensely.