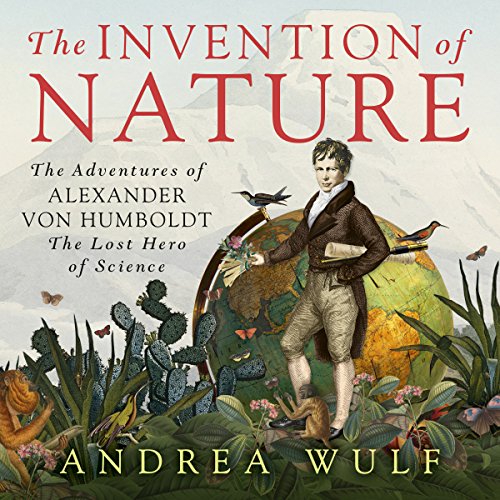 The Invention of Nature

Winner of the Costa Biography Award 2015. Winner of the LA Times Book Prize 2015 (Science and Technology). Shortlisted for the Independent Book Week Award 2016.

Alexander von Humboldt (1769-1859) is the great lost scientist: more things are named after him than anyone else. There are towns, rivers, mountain ranges, the ocean current that runs along the South American coast; there's a penguin, a giant squid - even the Mare Humboldtianum on the moon.

His colourful adventures read like something out of a Boy's Own story: Humboldt explored deep into the rainforest, climbed the world's highest volcanoes and inspired princes and presidents, scientists and poets alike. Napoleon was jealous of him; Simon Bolívar's revolution was fuelled by his ideas; Darwin set sail on the Beagle because of Humboldt; and Jules Verne's Captain Nemo owned all his many books. He simply was, as one contemporary put it, 'the greatest man since the Deluge'.

An engaging, interesting read on a fascinating man

A very enjoyable read about a fastinating man who's life was well lived and who has had far reaching influence during his lifetime and to present day. A vital part of anyone's reading collection who is interested in science writing and the environment. Michael Hall -Environmental photographer

This book is a small masterpiece and a must for anyone interested in the history of science, ecology, romanticism, and environmentalism. There is never a dull moment in Wulf's book, which follows Humboldt from the University of Jenna, Goethe, to revolutionary France, the Amazons, the new republic of America, and back to Germany. The chapters on Darwin, Thoreau, and Haeckel are also fascinating. The style of writing is vivid and this audio reading is captivating. One criticism. I think the amount of emphasis placed on Humboldt influence on the modern idea of nature is a little overblown. The argument is very much a "great man in history" argument. Having said this, this is a great book.

Flawless performance and inspiring story on a remarkable man. The ending chapters can seem less relevant though.

Good. But unecessary chapters on other biographies