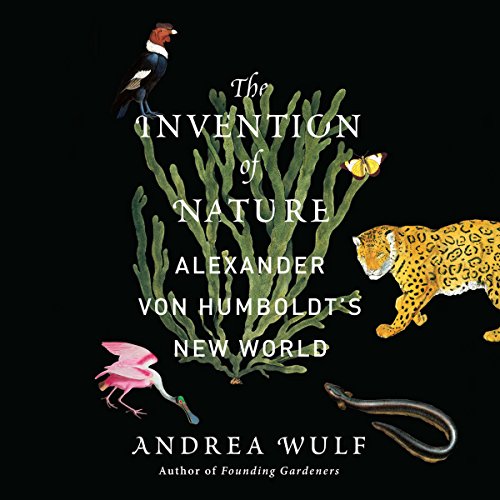 The Invention of Nature

Alexander von Humboldt (1769-1859) was an intrepid explorer and the most famous scientist of his age. His restless life was packed with adventure and discovery, whether climbing the highest volcanoes in the world or racing through anthrax-infested Siberia. He came up with a radical vision of nature, that it was a complex and interconnected global force and did not exist for man's use alone. Ironically, his ideas have become so accepted and widespread that he has been nearly forgotten.

Now Andrea Wulf brings the man and his achievements back into focus: his investigation of wild environments around the world; his discoveries of similarities between climate zones on different continents; his prediction of human-induced climate change; his remarkable ability to fashion poetic narrative out of scientific observation; and his relationships with iconic figures such as Simón Bolívar and Thomas Jefferson. Wulf examines how his writings inspired other naturalists and poets such as Wordsworth, Darwin, and Goethe, and she makes the compelling case that it was Humboldt's influence on John Muir that led him to his ideas of preservation and that shaped Thoreau's Walden.

Humboldt was the most interdisciplinary of scientists and is the forgotten father of environmentalism. With this brilliantly researched and compellingly written audiobook, she makes clear the myriad, fundamental ways that Humboldt created our understanding of the natural world.

I knew Humbolt was a great scientist, but I did not know a tenth of his accomplishments. This is a stunning look at a man who loved biology, geology, and anthropology, as well as human rights and lyrical writing. He invented the concept of ecology, discovered climate zones, and raised awareness of long term human impact on the environment. He inspired revolutionaries such as Bolivar, scientists such as Darwin, and writers such as Thoreau. Today, Humbolt is largely forgotten, but if you read this book you will never forget this extraordinary man.

A good history of a the rise of the modern way of thinking about nature and its relationship to man. Wulf has clearly researched this exhaustively, and seems to have read every piece of correspondence between Humbolt and his fellow scientists. However, despite effectively depicting the subject's character, enthusiasm, and spirit, this text lacks some of what it describes. I found the final several chapters dragging, although it ends on a very high note with Humbolt's posthumous influence on the great John Muir.

In a sentence, it is far more a description of his effects than of the man himself, Initially presented as an adventurer naturalist, it turns out he spends 90% of his life bouncing around Europe and writing books, which are in turn read by people who we are more familiar with (Darwin, Lyell, Thoreau, Muir). Realistic, but not especially interesting.

At the same time, it serves as an important reminder of how man remains ignorant of his place on the planet. An important message.

Drummond is a good narrator, but at times seems to lack the excitement of the text. In fact, on some words he seems to be imitating Stephen Hawking's [computer's] syllabic pauses, most notable in the pronunciation of the word "nature". As a result...it comes up a lot. So you're reminded of it constantly.

Unfortunately, I couldn't get over the narration style and had to return this and will read the book instead of listen. I have heard wonderful things about this book, but this narrator's voice was like a slightly computerized sounding movie preview voiceover guy. The intonation of words was all wrong, the pace was too quick, and all I could focus on was the voice and how much it annoyed me instead of the story. I will get the book in hard copy and look forward to reading it!

Wulf’s award winning book is a bit different from the average biography in that it is about a history of Alexander von Humboldt’s (1769-1859) ideas as much as it is about the man. Humboldt was a naturalist, geographer, polymath, explorer and the first environmentalist who at one time was the most famous man in Europe.

Wulf is a lucid and intellectual writer. The book is a work of scholarship. Wulf allows the complex personality of Humboldt and his wide scope of interests to come through in the writing. Wulf did meticulous research of Humboldt’s diaries, letters and writings. The author quoted from some of the letters which added to the work. Wulf was born in India, raised in German and now lives in London where she writes.

David Drummond does an excellent job narrating the book. Drummond is an actor and winner of numerous Audiofile Earphone Awards for audiobook narration.

I enjoyed reading this book and learned much about Alexander von Humboldt. Years ago when I was in school I was fascinated by Humboldt. I wish I had this book to read at that time with its wide range of knowledge of Humboldt. If you are interested in biographies, science or nature you will enjoy this book.

The book introduces Alexander Von Humboldt's life and impact on fellow naturalists of his time as well as the modern understanding of nature. In times of global climate change this book could not be more relevant as it raises awareness through the fascinating and compelling story of AvH. Just like the genius himself the book does not limit itself to one character but brings to live the web of impacts Humboldt's ideas had on German and Anglo- Saxon literature and philosophy, politics in the young US as well as the Latin American colonies, and many more. My favorite book this year.

The narration was so irritating I couldn’t make it even a quarter of the way through. The narrator makes it sound just like a movie advertisement! I just couldn’t do it. I will have to physically read this one because the story is worth it.

an interesting biography married by one of the worst narrations I've heard in many years as an Audible subscriber. I'm not even sure that this was voicemail by a human, as many chapters sounded more like a Norwegian version of Stephen Hawking's mechanical voice than a true voice. Too bad.

I think I was the perfect target audience for this book. I had no idea who Alexander Von Humboldt was, but now I truly do love the man and all of his work. This was an eye-opening experience listening to this book.

Would you consider the audio edition of The Invention of Nature to be better than the print version?

Simon Bolivar, Charles Darwin, Frederic Edwin Church, Henry David Thoreau, John Muir and many other influential politicians, naturalists, writers and artists have been deeply affected by and inspired by the passion and scientific insight of Alexander von Humboldt. His insights are still pertinent today, yet he is no longer well known in the west.

I enjoyed many 'favorite' passages, especially those where famous naturalists like Muir and Darwin repeatedly return to Humboldt's writings for inspiration.

The book is emotionally moving and at times upset me and took my breath away. More importantly this book deserves credit for renewing interest in an important and influential historical figure who lost respect and fame after the west rejected anything German after World War 2.

Alexander von Humboldt should regain his rightful fame for his affect on modern studies in Ecology, Climatology, Natural History and Wildlife Art. Anyone interested in nature should become familiar with his work.

Incredible Story with an Average Reader

I loved the book. It's an incredible adventure story, but the reader is just OK.

The narrator is completely unsuited to the book. He reads like the voice in movie trailers... "in a world where a smart German aristocrat becomes the inventor of nature..." The author is over-anxious to convince you of Humboldt's importance and too much of the book is spent establishing that various famous people were very impressed with him. This gets annoying and repetitive. On the other hand it's a good introduction to a man who is now relatively unknown and whose ideas were seminal for our understanding of nature today.

I feel richer for having read/heard this book Humboldt's many talents are inspiring. Wulf's selections of which aspects of Humboldt's life to present and which stories of those he influenced she would follow are powerful and poignant .

The book was mostly really interesting and inspiring, but sometimes a bit repetitive in describing his view on nature and his state of mind. I don't know how to do it otherwise and since it is no real drawback, I'll give this book most definitely 5 stars :) the work behind this book must've been really interesting but also really hard - so cudos to the author.