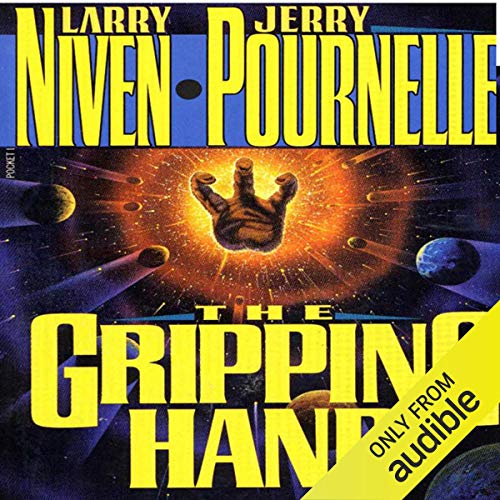 Robert Heinlein called it "possibly the finest science fiction novel I have ever read". The San Francisco Chronicle declared that "as science fiction, The Mote in God's Eye is one of the most important novels ever published". Now Larry Niven and Jerry Pournelle, award-winning authors of such best sellers as Footfall and The Legacy of Heorot, return us to the Mote, and to the universe of Kevin Renner and Horace Bury, of Rod Blaine and Sally Fowler.

There, 25 years have passed since humanity quarantined the mysterious aliens known as Moties within the confines of their own solar system. They have spent a quarter century analyzing and agonizing over the deadly threat posed by the only aliens mankind has ever encountered - a race divided into distinct biological forms, each serving a different function: Master, Mediator, Engineer, Warrior. Each supremely adapted to its task, yet doomed by millions of years of evolution to an inescapable fate. For the Moties must breed - or die. And now the fragile wall separating them and the galaxy beyond is beginning to crumble.

Sequel to "The Mote in God's Eye"

"The Mote in God's Eye" is one of my all-time favorite science fiction novels. When it appeared it took a truly novel, very anthropological approach to the subject of aliens, and it managed to make the Moties some of the most interesting aliens in the world of science fiction. This sequel picks up the story several decades after the original and spends the first half of the book reintroducing characters, reprising the plot line of the first book, and introducing a few new players (most of them descendents of people in the original). This reintroduction is long, tedious for someone who has read the original, and probably confusing for someone who hasn't. The second half picks up the pace because the Moties are back in the picture, and Pournelle and Niven do a great job of extrapolating the effects that contact with humans would have had on the Motie civilization. In summary, you definitely have to read the first book before you read this one, at which point you should fast forward through the first half of Gripping Hand as fast as your audio player will allow -- or get the WhisperSync version and skim to the middle and THEN listen. Ganser's narration is solid, but not worth the hours of listening required to get to the good stuff.

Just not as good as the first

I don't know who would enjoy this book after the first one. It was a fairly miserable sequel.

Would you ever listen to anything by Jerry Pournelle and Larry Niven again?

What aspect of L. J. Ganser’s performance would you have changed?

The performance wasn't that bad, the story was the problem.

Not really. Too silly on an ending, the characters got weak.

I wish I'd liked it.

In the first one, the reader makes a click noise when pronouncing feunch(click) ... in this one, he literally says "click" ... It's very distracting and weird, haha. last third of this book is up there with the first. First half drags.

This is a fascinating, classic book series. I enjoyed the first book, and this was a good follow-up. However, this was a poor audiobook production. It's not that the narrator isn't good; he's been great in other audiobooks. But somehow this book is tough to pull off by a single actor. Transitions between speakers are quick, not well delineated, so having a single voice actor do them all successfully is not easy. It was tough following who was speaking when. What's more, transitions across sections within a chapter were too quick, making it very hard to understand that we've changed setting and characters, resulting in a very confusing audiobook.

It's a pity that this fun book received such a subpar treatment.

Not your standard Pournelle and Niven

This book will be amazing if you absolutely loved the first book Mote in Gods Eye. While I enjoyed it, this book focused on a side story that just wasn’t THAT interesting in my opinion. Overall the performance of this book was just fine, but the story was not one of Pournelle’s or Niven’s finest works. The book seemed forced, and focused far too much on setting. Would always prefer detail over setting as Pournelle and Niven do usually. I’d recommend passing on this book. Mote in Gods Eye is just about all you need.

I was wrong all these years

I have never finished this novel despite The Mote in God's Eye being my favorite novel. I don't know if it was my extremely high expectations or I was just judging it too harshly. Well I listened to this and I really enjoyed it and found it to be a decent sequel to "The Mote" I think the reader "who was excellent" really brought the novel to life and greatly enhanced the experience. So thanks Audible I am really glad I listened to this. Well Done!

The sequel matches the first book

The story is excellent , just like the first book you can get lost in the details and multiple number of characters. Do not expect a summary of events in this squeal, it only mentions events from the first book as the story progresses.

Maybe its me but I found this difficult to follow.

It was ok but I had a hard time following the story line a lot of times. There seemed to be a lot of unimportant nonsense mixed in. Perhaps this was the authors method of building depth to the story/characters but I found it derailed the plot.

The first book was better...however, I found that the author trying to pass creatures that can modify and improve advanced technology as unintelligent animals was more than a stretch.

This should not be

The Mote in Gods Eye is a timeless piece of literature. This book is not. This book managed to somehow ... reduced the gravitas of the first book (for me anyway)

Read the first one - meh, for the second

Let's assume that you know what you are getting story- and author-wise; if you liked "The Mote in God's Eye", this is more of the same intriguing setting and interesting characters, with a somewhat weaker story. If you haven't read the former, don't start here, there's too much background missing.
However, the narration came close to sinking this for me a couple times. The speaker is very American, a little too fast, bad at distinguishing characters from each other, and an absolute ham in stretches. There's one Blaine family discussion scene that sounds like an amateur theatre troupe doing improv, all over-emoting. If you have thick skin required for this kind of thing, worth a listen.

Nice but not one of the best

Somehow a little confusing in the beginning. A lot of characters not easy to distinguish from each other. Without reading the først book it would be impossible to understand the story. Still worth to listen to if one liked the first book. Nice ending.