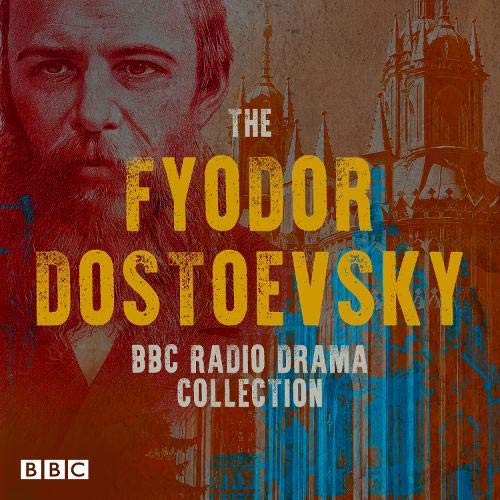 One of the most important and influential Russian writers of the 19th century, Fyodor Dostoevsky is admired worldwide for his great realist novels, exploring questions of morality, philosophy and the nature of existence. This compilation contains the BBC radio productions of his four most famous novels - as well as three lesser-known works and two bonus documentaries - collected together for the first time.

Crime and Punishment - When he tests out a horrific theory, young Raskolnikov finds himself pursued by the cunning Investigator Porfiry Petrovich. This thrilling tale of guilt and redemption stars Barnaby Kay and Jim Norton.

The Idiot - Arriving back in Russia after years spent abroad treating his epilepsy, Prince Mishkin learns the story of the woman who will dominate his life - the spoilt but captivating Nastasya.... Dostoevsky's most personal novel stars Paul Rhys, Roger Allam and Lia Williams.

The Brothers Karamazov - The Karamazov family reunite for a meeting with their father to discuss Dmitry's inheritance. But the unpredictable Fyodor seems unwilling to play the game.... Stars Roy Marsden, Paul Hilton and Nicholas Boulton.

The Friend of the Family - Russia, 1859 and the manor of Stephanchikovo is thrown into chaos when a former sergeant sets himself up as an arbiter of morals and taste. David Suchet and Clive Merrison star in this farcical comedy.

'Bobok' - Loitering in the cemetery after a funeral, a drunken writer overhears the conversations of the recently deceased corpses.... This blackly comic short story is performed by Boris Isarov.

'The Dream of a Ridiculous Man' - A study in music and words of Dostoevsky's vision of an idyllic, prelapsarian world. Read by Ronald Pickup.

Dostoevsky and Dangerous Ideas - John Gray reflects on the lessons Dostoevsky's novels teach us about the perils of misguided idealism.